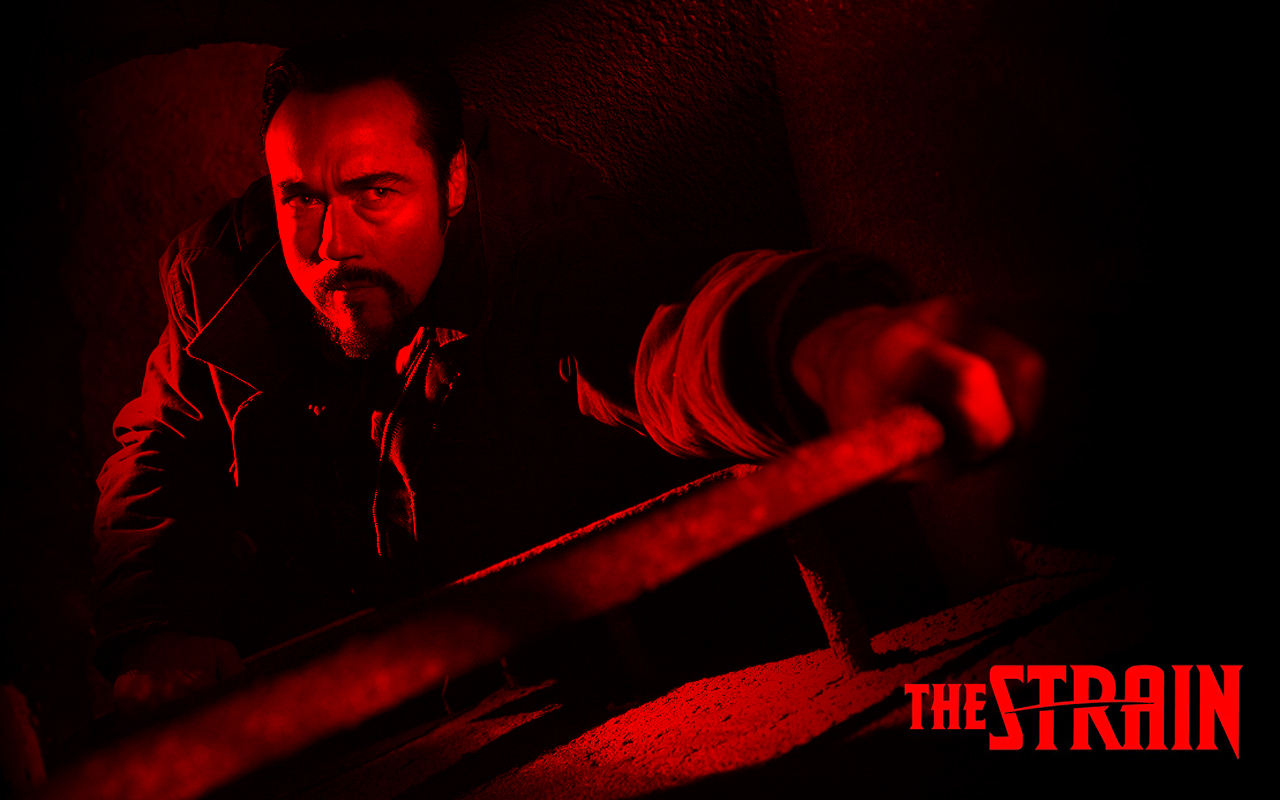 With “The Silver Angel” we are introduced to a new character from the book series in a clever way.  The Silver Angel himself is introduced to us through an old VHS tape of “Angel contra el Vampiro Maldito,” (Angel vs. The Vampires) an old Mexican luchador movie.  While the movie itself looks quite cheesy, it shows the height of Angel Guzman who is now just a lowly dishwasher at an Indian restaurant.  Angel can only remember the good old glory days in-between his breaks washing dishes.

Moving on, we get a little jam session from Credence Clearwater Revival’s classic “Fortunate Son” as Nora, Eph, and Vasiliy transport their science project of a vampire to a drop site.  All the while, we see Eph in back playing puppeteer with a vampire pulley system until Vasiliy can get to the back end and let the vampire out.  The whole purpose of this little expedition being that the vampire they release will infect the other vampires in his nest at sun-up.

Next, we see Gus walking down the street on his way to his mother’s old apartment. Before we get there, Gus decides to stop at a local Indian restaurant for some lunch.  Once again, the Silver Angel graces us with his presence as the overprotective dishwasher upset by seeing a “cholo” at a table.  After that quick lunch, Gus gets to the apartment where he is confronted by his vampire mother whom he left infected in the closet in season one.  This confrontation between mother and son feels high-jacked as the Master takes control of Gus’s mother, saying that The Ancients are the past and that he is the future.  Showcasing his love for misery, the Master tells Gus that his mother was always disappointed in her son and all of the pain that Gus caused her. A loving son, Gus couldn’t bear to “release” his mother, and instead walks out to lock the front door and her inside. 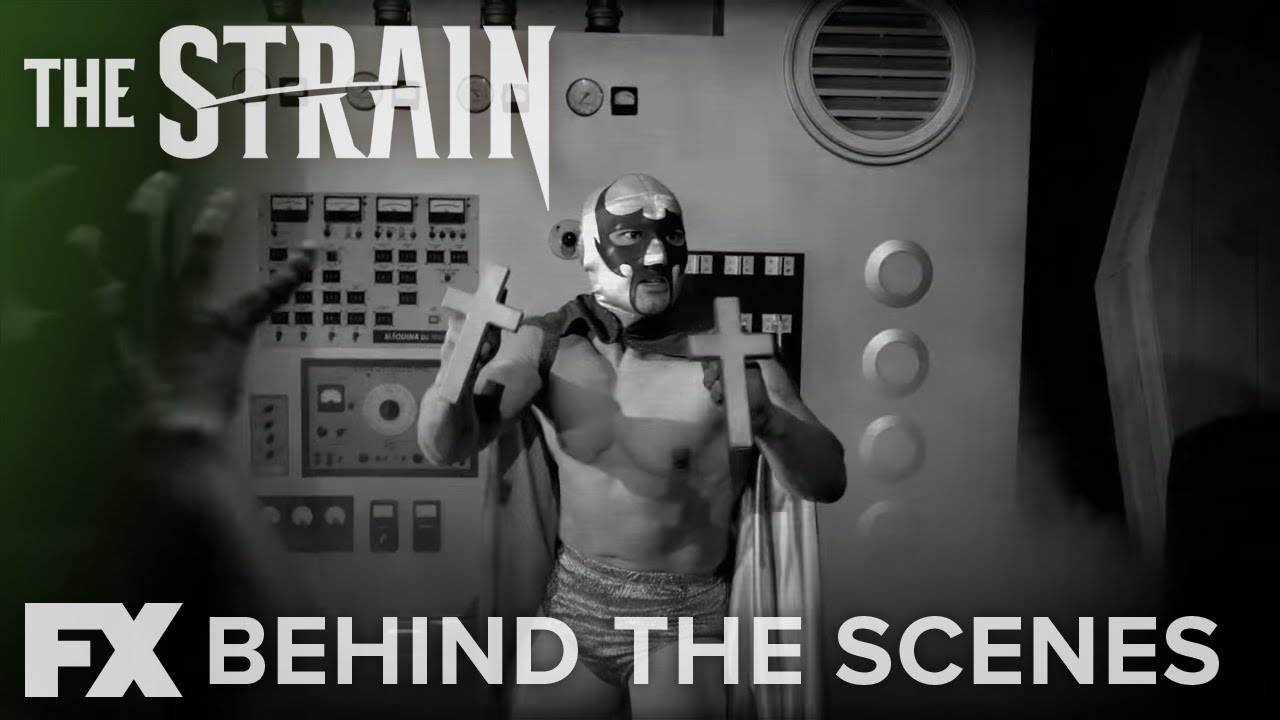 Back at the hideout, Dutch and Setrakian are talking as Dutch mentions Reggie Fitzwilliam, Eldritch Palmer’s ex-bodyguard, and how he might have information on Palmer and maybe a way to get to him, too.  So they set out to find Mr. Fitzwilliam at his brother’s house on Staten Island.  With a quick boat trip to Staten Island, Setrakian has the time to reminisce about a meeting with Eldritch Palmer in 1966 Vienna.

This flashback showcases a lot of what Setrakian was doing to combat the vampire virus—even at showing how Setrakian was aligned with Palmer for the Occido Lumen.  Eldritch surprises Setrakian when he appears, but Abraham doesn’t seem to mind as he explains how close they are to finding the Lumen.  Abraham says that the last place it ended up after WWII was at a nunnery in Austria. Next, we see Palmer and Setrakian at the nunnery after what seems like a vampire attack, with ammonia smell still active. As they search this nunnery, Palmer and Setrakian come across a young boy who tells them about the Occido Lumen and how the head nun supposedly destroyed it for being an evil book.  Just then, we hear a scream pierce the air and Setrakian sets off,  but not before leaving Palmer with a silver knife.

With Setrakian gone, we get to see the first meeting between Thomas Eichorst and Palmer.  Eichorst explains how Palmer is searching for immortality and that he can help him with that.  We are led to believe that Eichorst turns Palmer The Master’s side.  With Palmer meeting Eichorst and Setrakian trying to find the source of the scream, we get to see some of the combat finesse that he had as a younger man. As Setrakian “releases” a few vampires along his way, the best vampire kill he commits comes when he tosses the infamous silver sword cane down a hallway to impale a vampire. I had to question whether this was before or after Setrakian discovered his vampire blood eye drops that we saw from last week.  Either way, if Setrakian was “juicing” then or not we have to admit he was a talented dispatcher of the damned.  By the time Setrakian returns to Palmer, we see that Eichorst has convinced Palmer to abandon his search for the Occido Lumen, which effectively kills Setrakian’s search for it as well.

While Setrakian and Dutch search for Fitzwilliam in Staten Island, Eph and Zack try to have some father-son time at a local baseball cage.  While Zack and Eph are at the batting cages, we see how awkward their relationship is as Eph tries to help Zack hit the ball.  Going at the cages makes Zack remember a time when they were all there: Eph, Kelly, and himself as a family.  These scenes help keep the show grounded as we see this vampire virus is not only destroying the infected, but also the humanity aspect as Zack still longs for his mother to be cured by his father so they can be a family again.

Later on, we see a distressed Gus walking down the street again only to reappear at the Indian restaurant as he tells the waitress that he has nowhere else to go at the moment.  But the Silver Angel can’t stand to have Gus in this place as he gets in Gus’s face only to make him leave.  That night, we see Angel taking out the trash and Gus confronts him knowing that he is the Silver Angel that he used to watch as a kid.  Angel can’t handle Gus’s acknowledgement of his life as the luchador wrestler that he still longs to be, shoves Gus away, and leaves.

Eldritch Palmer attends a financial meeting where he tells members of a board that the markets will reopen as of tomorrow, but the exciting part happens when Palmer leaves this meeting.  Outside, the news reports about this meeting only to have their broadcast stopped by a vampire attack lead by Palmer’s new bodyguard, Bolivar.  This is an interesting development as The Master is showing his strength by attacking humans on a live camera feed.

Nora, Eph, and Vasiliy return the next night to where they let out their infected vampire to see how their serum is spreading through the vampires.  As they are looking for infected vampires, Vasiliy gets bored and decides to go do his plan of blowing up the main subway station—effectively slowing down the vampires ability to get around the island easily.  As Vasiliy leaves, we see Nora and Eph find their infected vampire dying and coming across another a few yards away.  As they investigate that vampire, another falls out of the sky to its death, drawing their attention to a roof of infected vampires committing suicide.  The Master is forcing those that are infected to throw themselves off so they cannot spread Nora and Eph’s serum to others. Seeing this, Nora and Eph clearly understand that their serum works and Eph wants to visit D.C. to start a weaponized dispersal system.

As Vasiliy finishes his final touches on his Looney Toon-style dynamite-controlled explosion, one of the Councilwoman Justine Feraldo “clean-up crews” capture him following the explosion but not before getting a few choice shots in on Vasiliy.  This was a fun scene as we see Vasiliy’s comedic timing as he references Wile E. Coyote and how he hates action heroes walking away from explosions.  Also, we see that Vasiliy is not going to go easy no matter what type of fight, as he lands a few good shots himself before the clean-up crew overwhelmed him.

The end of the episode was great as we keep seeing the overall theme of the importance of family, whether it be the love that Gus has for his mother (which is way he can’t “release” her), or the love that Zack has for his mother with the hope that she can be cured.  What about the love the infected have for their loved ones?  Last season, we saw how that helped spread the vampire virus, but now we keep seeing Kelly search for Zack.  We see Kelly and her new “children” at the same batting cages as Eph and Zack earlier, sniffing out their scent with Kelly uttering that Zack is close.

Next week, will we see Angel recruited by Gus to fight vampires as the Silver Angel? Will Quintus show-up again? Will Eph weaponize his serum? Or will Kelly finally get Zack back in her grasp?  Watch episode five, “Quick and Painless,” this Sunday on FX.