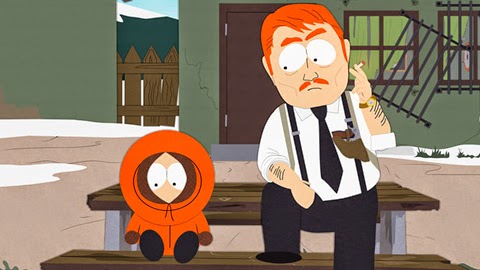 Back from real life and into “poorly” animated form, “South Park” returned this week to brilliantly blend Magic: The Gathering fantasy playing card game with underground cockfighting.  “C**k Magic” is one of those episodes with quips, quotes, and memorable scenes you’ll talk about with friends when bringing up favorites.  The core four take the lead with the muffled Kenny as the featured one among them; Butters appears in limited, yet humorous capacity while Randy’s subplot took precedence by the time all was said and done.  We’ll merely say he has a fallback if performing as Lorde doesn’t work out for him.  Jokes take priority over social commentary this week.  The girls’ volleyball team just can’t compete with the “dude stuff” that keeps Cartman constantly commenting about all the hilarity happening around him.

We open in the throes of a heated match of Magic: The Gathering between Kenny and another man far too old to spend time with ten-year-old boys.  Kenny wins and the boys retell the occurrence in hyperbolic glory at school the next day.  Unfortunately, the girls’ volleyball team hasn’t received their deserved recognition for representing their school with a hard-working, successful team as the boys seem to only care about the card game.  After school, the boys follow a tip from a janitor at the card game to catch a thrill fit for “a real man.”   They find themselves at City Wok. Mr. Liu-Kim (last seen with multiple personality disorder in a Norman Bates fashion) invites the boys in for “five darra”—a quote sure to take off immediately for everybody who does a Cartman voice.

Once underground, the boys discover underground cockfighting in the most unexpected way—two roosters deep in a match of Magic: The Gathering that contains dramatic, British narration and money changing hands all over the smoke-filled, dimly-lit basement. Blink, and you’d miss a Wing cameo. The boys finish the night back at Stan’s where they review and embellish on what they saw, however unlikely as it would seem.  They agree that acquiring, raising, training, and managing a rooster of their own for underground Magic: The Gathering cockfighting is the best next step.  Randy overhears this conversation and misinterprets “Cock Magic” in the most obvious, albeit hilarious, direction.  We learn about his talented magic act as “The Amazingly Randy” that Sharon reveals got him “kicked out of college.”  He feels compelled to provide a good role model now that his art will finally receive the necessary societal acceptance.  Many hilarious “The Amazingly Randy” gags ensue, but none are funnier than the fact that not a single character corrects Randy Marsh’s misunderstanding. The next day, the volleyball coach pleads with students in Mr. Garrison’s classroom to begin attending volleyball matches.  Stan finds out Wendy’s on the volleyball team, which pretty much obligates him to miss the Cock Magic match between the boys’ rooster, McNuggets, and another rooster.  The episode winds to a hilarious head as Kenny takes on McNuggets underground and the SPPD raid City Wok basement due to a tip from a flyer.  Queue Randy’s misunderstanding becoming the main event of the raid.  This episode saw creator Trey Parker return to episodes with a more timeless feel, memorable jokes and unforgettable situations.  The boys and Randy each make memorable appearances and provide fans with some solid quotes.