“South Park” took a break from the regulars this week in favor of the return of Nathan and Mimsy, Trey Parker’s take on the Looney Tunes characters Rocky and Mugsy.  These two were the main characters of the previous episode “Crippled Summer” from Season 14 in 2010.  Unfortunately, it quickly became apparent that these two didn’t have the staying power to run their own episode again as the subplot involving the parents easily became this week’s highlight.  And yes, there was yet another brief reference to Randy Marsh being singer Lorde. 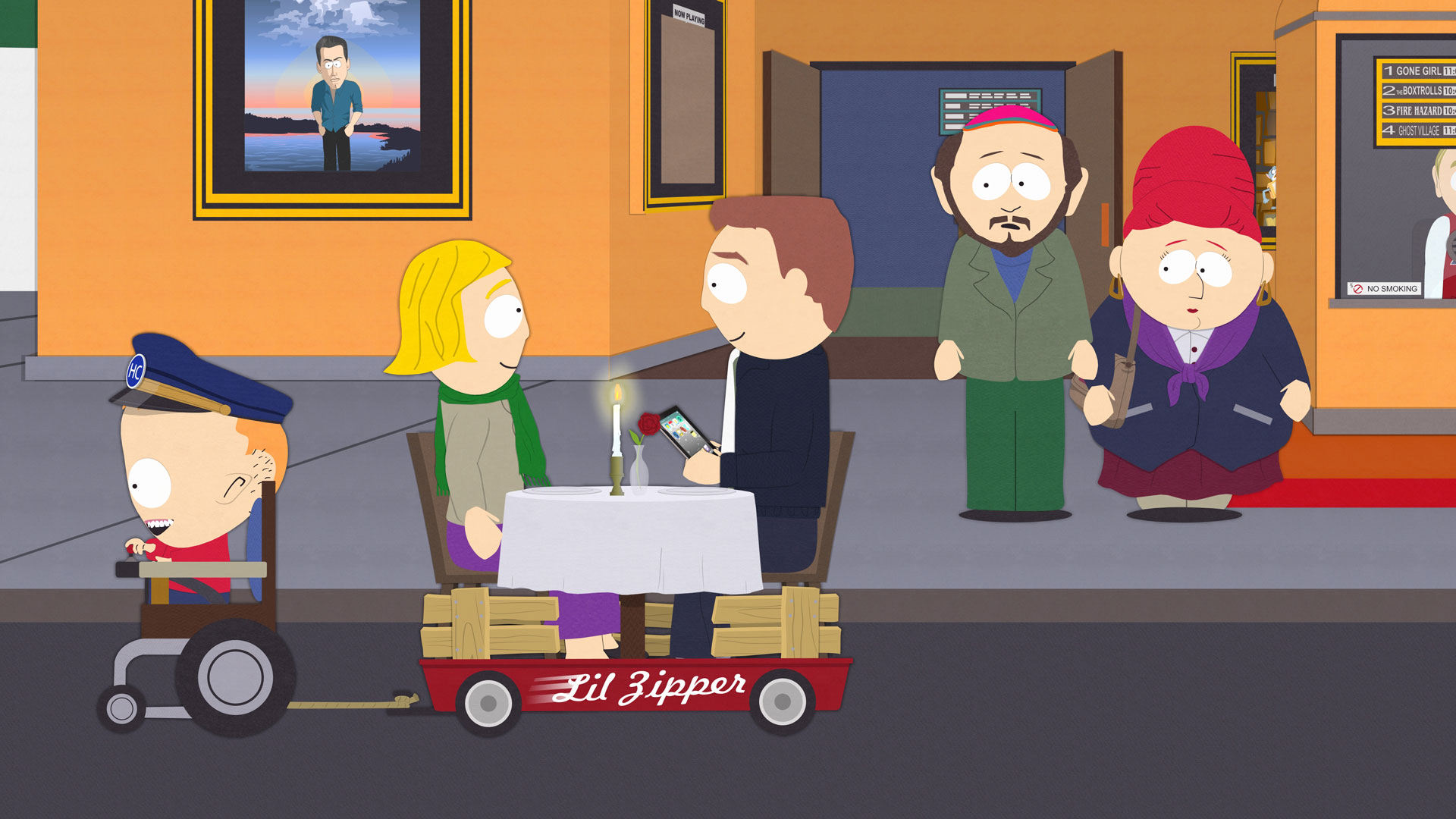 The show opens on Timmy’s new “Handicar” business, powered by a smart phone app.  The Stotches leave the Broflovskis on the movie theatre curb as their cab, Timmy in his electric-powered wheelchair hitched to a red wagon that reads “Lil’ Zipper,” ferries them home.  We soon find out that Timmy’s new business is the result of a fundraising program on behalf of the summer camp that served as the setting for Nathan and Mimsy’s earlier romp.  So far, Timmy’s Handicar business is making sure that the upcoming summer should turn out to be the best Tardicaca season yet.  Nathan has no ambitions of returning to camp and sets to sabotage Timmy’s business.  The laughs were few and far between at the beginning as the viewer constantly received a reminder of the “Mimsyyy!” gag.  Laughter picked up as the audience was treated to the cab system in South Park before Timmy’s new business sprouted up.  The Russian cab driver was a funny touch, but not enough to start momentum.

Nathan develops a devious plan to join the disgruntled cab union drivers sabotage Handicar.  Without divulging the entire charade, their plan to sabotage Timmy and summer camp fails horribly and Handicar keeps on proverbially trucking.  Nathan then tries to bring down the empire from the inside, but the plan backfires almost as awfully as the rape reference that I can’t even deign to call a joke. Parker tried, and I got it, but the literal context was far too dark for a laugh.

Handicar takes off so much that it becomes a legitimate competition for Elon Musk and the Tesla D model auto.  Naturally, Nathan then gravitates to Musk in order to achieve his camp-less goal.  Couldn’t Nathan have been replaced by Cartman with a grander scheme than skipping camp?  With the Tesla D in his corner, Nathan publically challenges Timmy to a nationwide race on Saturday morning resulting in the apparently long-awaited return of “Wacky Races.”  The laughs start to pick up as pandemonium ensues when parents raid grocery stores for cereal and milk in gleeful anticipation to recapture their long lost childhood happiness.

Also appearing in the race are “Wacky Races” core members Dick Dastardly and Muttly, Matthew McConaughey (in a hilarious parody of his recent Lincoln/ bull advertisement), and Neve Campbell looking just like one would expect a Canadian to look like on Parker’s program. The consequent race is the episode’s highlight, but it comes perhaps after too many redundant Nathan and Mimsy jokes. Musk, of course, fails Nathan as celebrity co-conspirators tend to do on the show.  As a result, Nathan then faces summer camp after a soul-crushing, last-minute joke courtesy of his parents.

“South Park” dipped into the well and used some fan favorites to liven up the series, but the redundant jokes quickly caused one to lose a good humor.  Nathan’s sexual harassment joke starts out funny and goes unmistakably awry.  Luckily, the Matthew McConaughey one-liners and the inclusion of Randy Marsh childishly narrating the Wacky Race at the episode’s end saved the show from going completely down the drain this week.  Bring back Cartman, Kyle, Stan, and Kenny!