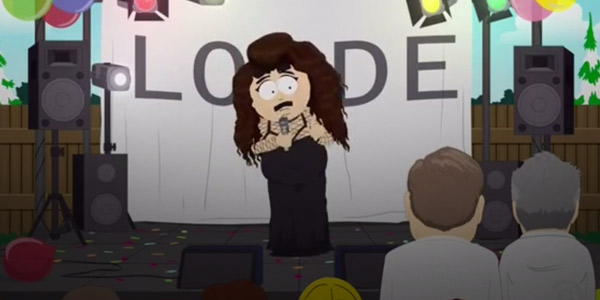 We’re two episodes into the newest season of “South Park” and the writing team already seems like they’re taking the show in a slightly different direction.  While not a sequel in name or plot to “Go Fund Yourself,” “Gluten Free Ebola” has direct consequences from the preceding episode while setting up the potential plot for the following episode when Mr. Mackey hints at a Wolf of Wall Street-esque tirade thrown by none other than Butters. Butters’ wrath got him suspended, thus his subsequent absence this week.  He was missed.  This episode brought to you by Papa John’s as the logo gets slapped all over everything like it was the Washington Redskins from last week.

“Gluten Free Ebola” picks right up where the core four agreed to go—school. A few laughs occur at the episode’s beginning, but the humor mainly gets forgotten in order to remind the viewer what happened last week.  This just isn’t funny.  All the deadpan lines about the boys dropping out of school that come from Wendy and other fellow classmates start out funny but age quickly.  While not humorous, the episode also begins with an introduction to the unusual (in the sense that anti-Semitism doesn’t dictate their dialogue) understanding between Kyle and Cartman throughout.

The audience then gets privy to a rare South Park Elementary School Board meeting with Principal Victoria, Mr. Garrison, and Mr. Mackey in attendance.  Mackey makes a gluten-free entrance, constantly remarking and freely offering advice about the pluses of a life sans gluten.  Mr. Garrison really steals the scene with his verbal and nonverbal expressions.

In true Andrew W.K. fashion, the boys agree that a party is the best direction to take things.  They use Scott Malkinson’s diabetes for a public occasion other than selfishness to host their shindig that promises all the pizza you can and a performance by Lorde.  You see, Stan’s father, Randy, has an “in” with Lorde through a work colleague.  However, several gluten-concerned callers chime into the radio station where the boys make their announcement as the epidemic spreads beyond the staff meeting. After getting caught up in their own drama, the core four miss out on the anti-gluten hype. “What the hell is gluten?” Cartman wonders. The USDA arrives in Park County just in time to cause mass panic.  After attending the USDA meeting, Randy and Sharon March arrive home with a grave misunderstanding of gluten and an unforgettable memory of its effects.  The constant joking with the fictional effects of gluten gets old quickly.  This scene incorporates one of the best ignorant Randy lines in a while when he decides which foods his family should keep and which to dispose.  While sleeping in bed at his home, Cartman dreams of his favorite name-brand syrup in a kaleidoscope of a trippy dream sequence certainly to become the highlight of the episode if the ending isn’t quickly forgotten.

A series of escalating (and ignorant) events leads Randy in quarantine at an American pizza chain.  While in the joint he runs into Mr. Garrison.  As time disappears leading up to the concert, Stan desperately needs to find his father so he can get Lorde to appear.  In the midst of all this, Cartman’s back-and-forth phone correspondence with Kyle leads to solving the mystery behind gluten.

After the gluten code finally gets cracked, the party for Scott Malkinson does, in fact, occur with Lorde.  However, it isn’t Lorde that performs and either everybody was somehow fooled or nobody seemed to care.  The joke mostly happens in the background, but it’s prominent and in more than a few shots.  It’s never really clear what the humor is supposed to be outside of the obvious bearded-man-in-a-dress.