television -> Mozart in the Jungle Season One review

Mozart in the Jungle Season One review

For hipsters, by hipsters

Hollywood royalty cousins Jason Schwartzman (Rushmore, Scott Pilgrim vs. the World) and Roman Coppola (director of CQ and A Glimpse Inside the Mind of Charles Swan III) together with Alex Timbers have adapted oboist/ journalist Blair Tindall’s memoir about navigating the professional instrumentalist (and subsequently bohemian) experience in New York City, Mozart in the Jungle: Sex, Drugs, and Classical Music, into a television series for Amazon Studios now available to stream through Amazon Instant Video as of December 23, 2014.  Showrunners Schwartzman and Coppola are both well-known for their taste in simultaneous experiences of comedy and the surreal—and Mozart in the Jungle excels in both categories. Amazon Instant Video has introduced itself to be just as bold and confident as Netflix in quality original programming by casting acting legends Malcolm McDowell and Bernadette Peters in outstanding supporting roles among a young, up-and-coming cast.  Coppola even directs an episode in addition to other directors: Paul Weitz (Admission, Being Flynn), Bart Freundlich (The Rebound, “Californication”), Daisy von Scherler Mayer (“Mad Men,” “Orange is the New Black”), Tricia Brock (“Girls,” “The Walking Dead”), Adam Brooks (Definitely, Maybe, The Invisible Circus), and Daryl Wein (Lola Versus, Breaking Upwards).

Although her book was published in 2005, many remember Tindall for her brief, disastrous marriage to science icon Bill Nye in 2006 that blew up into a spectacle of sorts with court and restraining orders.  There are no references to Tindall’s life beyond her New York experience as the series Mozart in the Jungle largely follows protagonist Hailey (Tindall’s avatar for all intents and purposes) and her struggle to make ends meet as a young woman in New York City.  Lola Kirke (Gone Girl, Free the Nipple) plays Hailey. The series also follows talented secondary lead Gael García Bernal (Y Tu Mamá También, Rosewater) as world-renowned composer Rodrigo.

Hailey and Rodrigo find their stories intersecting from early-on in the series.  After her disastrous meltdown in front of the New York Philharmonic, the newly-hired composer Rodrigo keeps the young, but talented Hailey on as a personal assistant. This results in all matter of adventures with the charismatic, superstitious, genius, eccentric maestro.  Kirke’s character is a likeable lead and a quiet type.  Despite her obvious, raw talent, she displays flaws and owns up to them.  Rodrigo, like the viewing audience, notices Hailey’s potential despite her mistakes.  Despite playing the quiet type, Hailey isn’t one to take crap.  She displays a few brief eruptions of anger in the first season at some very-deserving parties that make us root for her all the more.  Hailey’s just trying to keep her head down and come up breathing like everybody else; Kirke brings this to her performance.  Perhaps what’s best about the protagonist is her constant, silent appeasing of Rodrigo pronouncing her name as “Jai alai” because she simply has too much respect to correct her mentor. 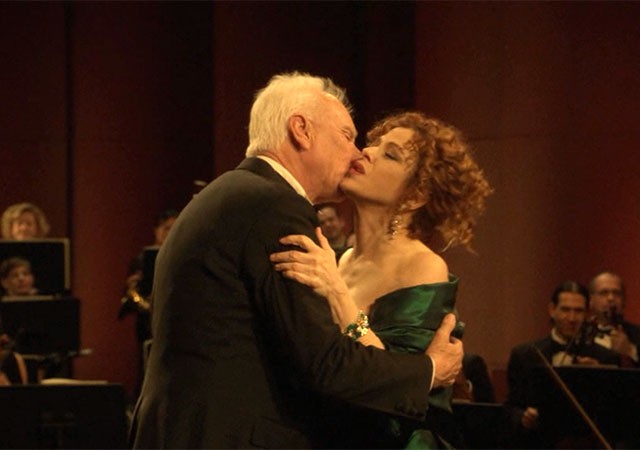 Bernal’s Rodrigo easily serves as the comedic relief with his positive perception of life, overflowing talent, hilarious idiosyncrasies, and parrot.  The character Rodrigo is a humorous, hyperbolic take on real-life composer Gustavo Dudamel.  Bernal is known mostly for his work on smaller, foreign films so for the talented character actor to appear on a Web-based series would be about as rare as his character Rodrigo publicly playing violin.  Bernal uses his comedy background well, making viewers laugh far more than any character.  Rodrigo’s charisma is just a testament to Bernal’s performance—he makes the other characters fall for his charms just as easily as the home audience.

Saffron Burrows (“Marvel’s Agents of S.H.I.E.L.D., “Law and Order: Criminal Intent”) plays another secondary lead in addition to Rodrigo as cellist Cynthia.  Burrows’ Cynthia carries on an affair with Thomas, the former maestro, and offers world-weary advice to Hailey.  Hailey looks up to Cynthia for most advice, and Cynthia gladly takes the young performer under her wing—seeing something of her younger self in Hailey.  Hannah Dunne (Free the Nipple, Frances Ha) plays Hailey’s free-spirited, loyal roommate and friend who appears in all episodes as well as Cynthia.  Malcolm McDowell plays the outgoing maestro, Thomas, and has a difficult time coming to terms with his replacement, Rodrigo.  The two maestros often converse with humorous insults or grand displays of talent.  Bernadette Peters appears in almost all episodes as president and fundraiser Gloria.  Most of her scenes involve solving a crisis caused by one or both of the maestros.  Even co-creator Schwartzman appears in a couple episodes as a self-interested podcaster.

While Mozart in the Jungle certainly doesn’t target a broad audience, it’s niche audience of twenty- and thirty-somethings who enjoy quirky comedy on a surreal scale with magnificent musical accompaniment will find themselves more-than-satisfied.  Some characters are relatable and real like Hailey and Cynthia, while others serve more of a character-type like Rodrigo and Thomas, but all characters play out perfectly when blended together for any given situation.  Following successes “Transparent” and “Alpha House,” Amazon Studios looks poised for the next level of entertainment after an electric first season of Mozart in the Jungle.  Perhaps the next level should be a drama to get the Amazon-brand name competing with Netflix’s “House of Cards” and upcoming slate of four Marvel Comics-based series?