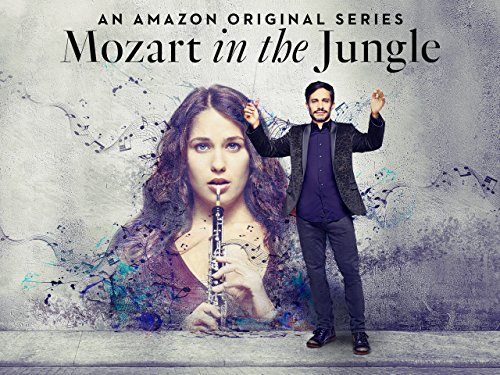 Mozart in the Jungle Season 2 review

Following an excellent first season, Amazon Instant Prime’s half-hour comedy series “Mozart in the Jungle” had a long way to go for its second showing if the show even wanted to match the quality displayed in 2014. Luckily, Hailey (“Hai Lai”), Rodrigo, Gloria, Thomas, Cynthia, and the entire New York Symphony return with new perspective after the conclusion left them in different places last year when Hailey got to play in the finale with her best friend Lizzie attending in the audience.  This year begins with Hailey moving up the ranks in her career as Rodrigo organizes his musicians to play a Latin American tour in the middle of contract negotiations and the possibility of strike. This casts a figurative rain cloud over the trip. Producers Jason Schwartzman, Paul Weitz, and Roman Coppola obviously enjoy their work, writing eccentric, kooky musicians who travel to exotic, exciting locations as “Mozart in the Jungle” continues its brand of comedic situations and concert-quality music—demonstrating to viewers that making a good show can be even more fun than watching it.

World-class musician cameos pop up all over “Mozart” in its second season. The first episode briefly features distinguished Venezuelan maestro Gustavo Dudamel (largely the inspiration for “Rodrigo”) as a stage manager, sharing a few lines of dialogue with Rodrigo. Character actor and classically trained cellist Dermot Mulroney (Insidious: Chapter 3, “Shameless”) has scenes in two episodes as “Andrew Walsh,” a sleazy, womanizing guest cellist with an eye on Hailey. In 2015, Mulroney performed on the scores for Inside Out and Jurassic World, to name a couple. The cavalcade of cameos hits a high point in the fourth episode of ten, “Touché Maestro, Touché,” where not only does Mulroney appear as Walsh, but so do Lang Lang, Emanuel Ax, Joshua Bell, and Alan Gilbert as themselves. Lang Lang plays “Hungarian Rhapsody” only briefly, but it’s certainly worth a view.

Lola Kirke (Mistress America, Gone Girl) continues her growing performance as Hailey Rutledge. Rooting for Hailey still isn’t difficult as Kirke makes it look simple to play the oboe with world-class musicians while developing a rich, growing character for the audience. Gael García Bernal (Rosewater, Desierto) plays Rodrigo with his eccentric brand of humor while balancing the pressures of returning home and pleasing his potentially-striking orchestra. Bernal currently enjoys his first Golden Globe nomination as his performance in the first season landed him in the “Best Performance by an Actor in a Comedy or Musical” category for 2016. It’s been rumored that Bernal’s conducting prowess goes beyond what one sees in the show, as the cast allegedly follows his movements perfectly when they play.

The supporting characters get seasonal arcs, as well. Bernadette Peters’ (Smash, Coming Up Roses) Gloria finds herself between a rock and a hard place in terms of the symphony contract negotiations. Throughout the season, she’s constantly in danger of losing her position if she isn’t in danger of the musician’s striking. She has to please all masters while also staying true to herself and uncompromising in her character.  Malcolm McDowell’s (Some Kind of Beautiful, The Black Hole) Thomas continues his emeritus status laboring to write an original symphony while facing the possibility of returning to his old gig. He and Rodrigo share a few special scenes together to show their blossoming friendship as opposed to Thomas’ disdain for Rodrigo during most of last season. Saffron Burrows (Quitters, “Agents of S.H.I.E.L.D.”) continues her role as “Cynthia,” Hailey’s source of advice and mentor of sorts. This year, Cynthia has no wishes to return as Thomas’ “Constanze,” and instead has her interests set on the lawyer representing the orchestra during contract negotiations. Will her personal relationship pour into the professional?

There’s one drawback to all the exciting character development. Hailey’s best friend/ roommate Lizzie starts dating Jason Schwartzman’s “Bradford Sharpe.” Hannah Dunne’s (Free the Nipple, 5 Flights Up) Lizzie was dependable for a laugh in each scene that featured her in the first season, and that mostly stays true for the second, but she’s written out of a lot more episodes than last year when Hailey feels the urge to move out to her own place. When Lizzie dates Bradford, Schwartzman’s character gets a lot room to develop laughs, but not Lizzie. She’s the sole “character arc casualty” of season two as she mostly helps and facilitates her friends without developing personally outside of her relationship. Luckily, Hailey’s situation also advances past her boyfriend, Alex (Peter Vack-“The Blacklist”). Alex served more of a distraction in the first season, and Hailey starts to realize this.

Terrific seasonal arcs for all but one of the principal characters and outstanding music make “Mozart in the Jungle” another reason why 2015 wound up as the best year for television content after “Fargo,” “Better Call Saul,” the “Justified” and “Mad Men” finales,and everything Netflix was up to year-round. Ten episodes fly by quickly to make the viewer want more content, but it’ll be at least one more year until ten more episodes show up on one’s Amazon Instant Streaming queue. The cast and crew create a memorable season that has a car chase in Mexico City with Warren Boyd, Rodrigo’s dorky, new assistant, a mean, hothead guest conductor who challenges the symphony, a sexy photo disgrace, and a boatload of musician cameos sure to titillate aficionados.