Although last week’s midseason premiere, “Severance,” focused primarily catching up with the partners post-McCann/ Erickson sale, “New Business” involved Betty and Don’s boys (we learn Sally Draper still lives away at school) life a little bit, but office politics rear its ugly face and divorcing Megan took over the plot this week. We still haven’t found out if Ginsberg’s recovery has worked out for him, and deeper still, we still haven’t learned of Sal’s fate after his firing in the third season. Maybe these ends never get tied up, but never forget season five’s “Christmas Waltz” when viewers learned Paul Kinsey’s post-Sterling Cooper fate.  Competing for ratings with “Game of Thrones” won’t be easy for the program’s home stretch, but the recent HBO leak looks to give the cornerstone AMC series the upper hand. Director Michael Uppendahl (“American Horror Story,” “Ray Donovan”) opens with a boys’ night in for the Draper gentlemen: Don, Bobby and little Gene.  Don tries to prepare shakes in a blender as Betty Francis (January Jones’ midseason debut) and her second husband, Henry walk into frame, picking up the boys. Betty tells Don that she’s going to school for psychiatry. Hamm wears Don’s obvious facial doubt well, and Betty’s known Don long enough to interpret his nonverbal cues. They civilly part ways as Don’s phone rings. On the other end of the line, Megan sits, planning her trip to New York City to retrieve the rest of her things and ask for some more from Don.  The dichotomy of Don’s ex-wives shifted.  Where Megan and Don left on amicable terms when we last saw them, she harbors nothing but animosity for him now.  Betty and Don haven’t enjoyed a friendly divorce until this first scene in “New Business.” Betty’s maturity and Megan’s bitterness seem to have taken over the respective characters. Don’s charming, dishonest effect on his paramours typically breeds extreme reactions.

Next morning at the office, Roger Sterling walks into a secretary ambush in his office.  The workload mixed with the changing of times (it’s now been 10 years since one, according to the series’ timeline) weighs too heavily on Roger’s secretary. So much, that she’s taken on a second secretary to balance the workload.  Unfortunately, it quickly becomes obvious that the new secretary can easily handle these duties as his first secretary struggles to make herself of use. The camera jumps across the office to right outside Don’s office.  Harry chats up Don’s secretary as he attempts to gain entry, telling her to visit Los Angeles as he often enjoys.  She can’t consider the thought, however, knowing Charles Manson runs around at large. Don arrives in the middle of the conversation and Harry follows him into the office.  Harry wants to know if Don’s cool that he’s going to have a private lunch meeting with Megan regarding her acting career. Don expresses that he doesn’t care because Megan isn’t his wife anymore. We stay with Draper in the next scene, he sits alone at a restaurant and his waitress should be none other than the waitress from the diner in last week’s “Severance.” He’s more-or-less stalked her from her former job to her current job, just trying to get a moment to speak with this mysterious woman. Don hands over a business card and asks her to call him when her shift at the restaurant ends.

The midnight oil burns in Peggy’s office. She sits at her desk as Stan walks in and expresses how he feels left out of their recent Cinzano television campaign with sought-after director, Pima.  The night still hasn’t ended as a chance phone call wakes Don Draper up from his bed.  The caller identifies herself as Diana, the mysterious waitress. He invites her over for a drink, and before you know it, she arrives at his doorstep. She wears her work uniform as Don greets her in a suit. “I’m vain,” he explains. Neither has an illusion regarding this rendezvous and the camera quickly cuts away from them kissing by the door to sleeping in Don’s bed.  Diana can’t sleep. He tells her about his kids (she says she has none) and conversation quickly turns into their mutual divorce situations despite her not believing Don’s situation at first. Her natural distrust of Don seems to make her even more attractive to him.  The next morning, he finds her in Sally’s room. She breaks down emotionally, telling Don that she, in fact, had a two-year-old girl that recently died. He sits and holds her as she asks him why he hasn’t gone to work yet.  “I don’t feel like it.”

At the Cinzano shoot, Peggy introduces to Stan to the entire production team, including the groovy, aggressive Pima (special guest Mimi Rogers). She and Peggy share a moment discussing gender politics at the office during the changing of times. With Don trying to get past his failures at marriage, Roger needing a new secretary, and Peggy trying for a measure of greater authority, the “New Business” title certainly fit the episode well. Don’s secretary catches him late for work as he strolls in; informing him that Mr. Sterling is not to be disturbed in Don’s office. He walks in to find his mustachioed friend drinking away his secretary predicament.  The conversation briefly turns to ex-wives until the receptionist calls Roger away from Don.  Later on, Pima corners Stan—playing up to the weaknesses Peggy talked about in their scene together. Pima wants creative control, but can’t get it as her role (directing) in production gets handed over to Peggy for editing and advertising. She wants to use Stan to get complete control on the project in a ploy to pit him against Peggy, asserting that he desperately wants her opinion of his amateur photography.

Megan arrives in her New York hotel room and her sister greets her, ecstatic to have a vacation away from her duties as a wife and mother with her own mother and sister. The next scene follows Don and Diana as they board the elevator in Don’s apartment building.  Arnold and Sylvia get on the elevator and acknowledge their elevator companions.  This was the first time since “Favors” back in 2013’s season six that we saw Sylvia when she and Don broke off their affair.  Arnold still seemingly has no clue or merely doesn’t care. “How many affairs have you had in this elevator?” Across town, Stan expresses his frustration at work and with photography to his girlfriend.  She quickly tries to cheer him, volunteering to model for him as she disrobes. The camera cuts back to Don and Diana as they enter his apartment and set a greasy bag of take out on his dining table. They embrace each other as the camera fades to the next morning when a telephone call for Don from Megan wakes them.  She’s on her way and they have to leave the apartment while she packs with the movers. When Don arrives late at the office, he immediately realizes he’s late for a golf meeting when sees Pete waiting for him in a hilarious golf outfit and a set of clubs.

At Don’s apartment, Megan, her mother, and her sister pack boxes as the movers handle the heavy lifting.  They speak ill of Don, blaming him for things Roger established earlier in the episode about accusations from his own second ex-wife.  On the car ride to the golf meeting, Pete and Don get a chance for a heart-to-heart with Pete now joining the divorce club. After ten years, he still can’t make sense of Don. “You think you’re gonna live your life over and do it right. But what if you never get past the beginning again?” Pete poses an interesting dilemma for his work colleague.  Viewers recall Pete figuring Don’s Dick Whitman mystery out in the first season. Back at the apartment, Marie can’t cover the cost of the movers.  This seems bizarre as Megan left plenty of cash for her mother to pay the men.  The camera pans wide and we see that Marie had them empty Don’s apartment of all furniture.  She furiously calls Don’s office to get him to come pay the rest of the money, but instead gets his secretary who annoys Marie into oblivion…or rather another partner at the office.  She calls Roger with the same measure of anger, but manages to speak directly to him. 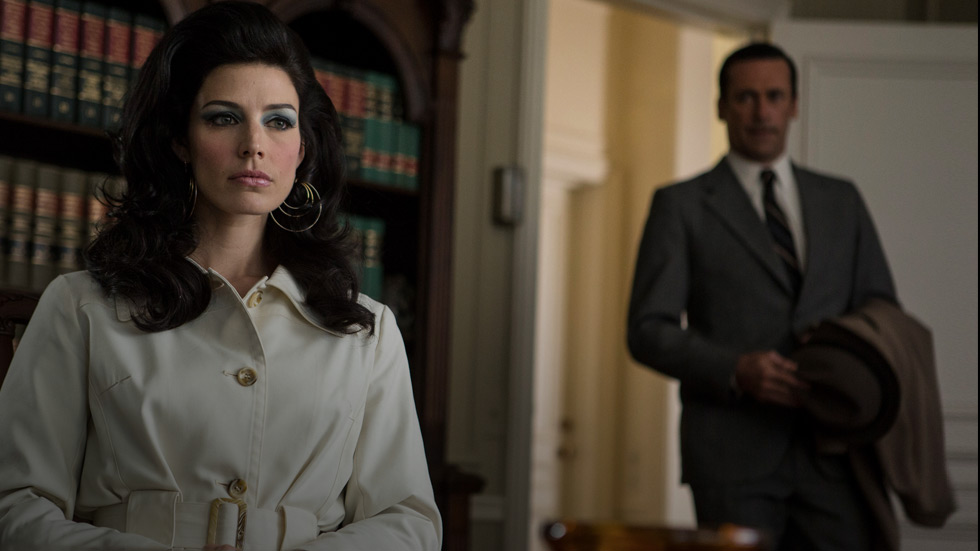 Back at the office, Pima corners Stan in the developing room and successfully seduces him in her ascent up the chain of command regarding “her” commercial. Stan was a likeable character but his cheating heart turned him into just another one of the “Mad Men.” Roger meets Marie at the apartment to pay off the movers. “Take advantage of me,” she tells him.  They retire to the bedroom to resume their long affair. Marie’s daughter, Megan, meets with Harry across town to discuss her career.  Harry tells her that Don could have, should have done so much for her acting career and that he can take her to the next level with his connections.  She doesn’t quite pick up on his fumbling pass at her until he makes it obvious, putting his sleazy hand on hers. She rebuffs his advance, storming away to ditch him at the table. We stay with Megan as she enters the apartment, catching her mother and Roger shortly after the act. This is too much to handle after Harry’s disgusting advance.  Harry then corners Don in the office, trying to get to him before Megan can complain about him.  This isn’t unlike the season five premiere when Megan busted Harry and his perverse fantasies about her. Don blows Harry off, hardly hearing a word. Peggy and Pima share a scene alone together where they discuss the project.  This devolves into Pima unsuccessfully attempting to seduce her.  Peggy isn’t dumb to these games and has already rebuffed another woman’s advances in the past—her journalist friend, Joyce, from the fourth and fifth seasons.

The camera shifts focus to Don and Megan meeting without their lawyers.  Before they discuss terms, Don expresses sorrow and regret to an already upset Megan, who obviously considers what Harry said about her ex-husband.  He cuts her a check for $1 million—roughly $6,000,000 converted from 1970 to 2015 dollars. She accepts the check with disbelief.  We cut back to the office where Peggy and Stan have their little skirmish regarding Pima.  Peggy reveals she saw through Pima’s attempts to get rehired for future jobs by way of sexual politics, leaving Stan to feel used and sick with himself.  Megan and her sister meet back at the hotel room.  Her sister can’t believe their mother has left their father for Roger Sterling; however, Megan points out their parents’ marriage struggled for quite some time. “You poisoned her with New York,” the sister accuses. Stan and his girlfriend sit up in bed at their apartment. He clearly looks disconnected because he carries the guilt of cheating on her with a completely meaningless, confusing affair.  The episode ends with Don meeting Diana at her apartment.  She’s drunk on vodka and confesses that she also has an older girl still alive back in Wisconsin, living with her ex-husband. Diana tells Don that their time together caused her to forget her daughter—something she never wants to do again. Don, having a daughter away at school, understands and quietly excuses himself to close the episode.  Although we never got to see Ken Cosgrove’s follow-up from last week, it was nice to see Betty, Megan, and two of the kids if only to see that Don isn’t completely disconnected.