The Mountain and the Viper

“Game of Thrones” returned Sunday to stellar ratings yet again following the fortnight break to observe the Memorial Day holiday.  “The Mountain and the Viper” refers to the final sequence of the episode like several other preceding episodes this year: “The Lion and the Rose,” “Breaker of Chains,” “The Laws of Gods and Men,” and “Mockingbird.” The titular characters consist of Cersei’s champion, Ser Gregor “The Mountain Who Rides” Clegane, and his vengeful opponent Oberyn “The Red Viper” Martell, Prince of Dorne—Tyrion’s champion.  The camera takes us all over the place to check in with many characters; however, Bran’s brigade, Brienne & Pod, and Davos, Stannis & Melisandre do not appear this week.  “The Mountain and the Viper” fits perfectly into the seasonal theme of “Valar Morghulis—All Men Must Die” with several deaths in a trial by combat.

Such little time has been devoted to Brandon Stark particularly this year which sincerely takes away from the importance his role takes in the greater scheme of things. Weiss and Benioff deviating from source material seems to pay off in terms of ratings and growing popularity, but how long with this gamble last? Greater parts of Bran and Arya’s stories have been left out in favor of building several tertiary characters’ arcs. Arya has never visited the old woman who seems to be a greenseer and Bran never met Coldhands. These have fallen by the wayside in favor of extended nude sequences featuring Melisandre and Missandei.  HBO panders and the ratings soar.  Luckily, the rest of the episodes have been quality around these gratuitous shots.

The episode begins in Mole’s Town as Gilly toils away in a tavern/ brothel.  A long shot follows a drunken, angry woman who bothers Gilly until Tormund and Ygritte’s scouting party tears up the town and everybody in it.  Ygritte kills everyone in her path whether or not they brandish a weapon.  She hears a baby cry, then turns to investigate.  The red-headed wildling holds a shushing to finger to Gilly and her baby, Sam, presumably sparing their lives. The camera then jumps to older Sam at Castle Black with Jon and the only three other people who believe him. Sam comes to grips with the news that Gilly and her baby have probably died in the attack or the fire.  The others try to lift his spirits by pointing out that she could be alive—she’s a survivor after all: Craster, white walkers, giving birth, the journey to the Wall, it’s a hard-knock life.  The men then divert their conversation toward Mance Rayder’s army. “Whoever dies last, be a good lad and burn the rest of us.”  It’ll be 100 vs. 100,000 next week. You don’t want to miss that. 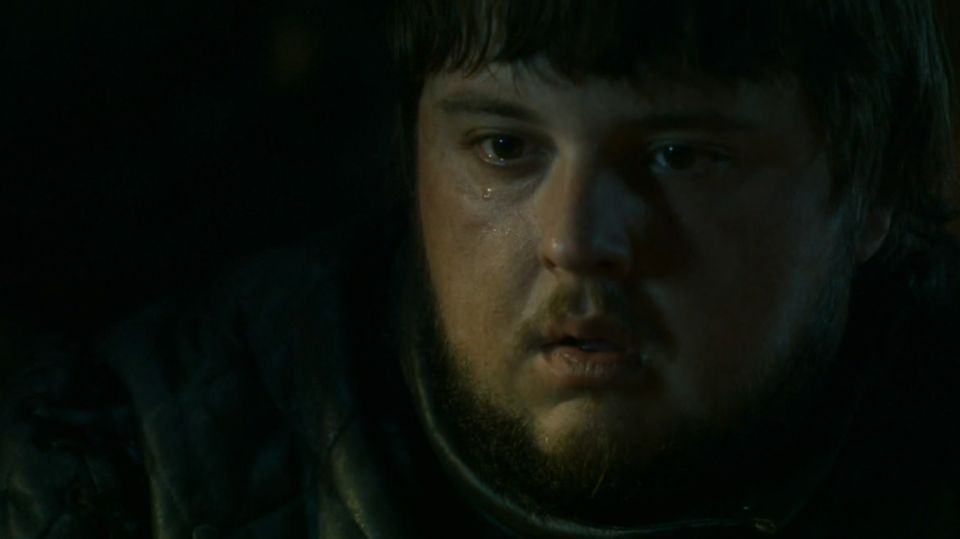 We next catch up with Grey Worm as he bathes in a creek.  He sees Missandei bathing as well, and lingers to look at her naked form.  Missandei doesn’t cover herself up immediately and before we know it, she stands fully-clothed next to Daenerys.  The two girls talk about sex and the Unsullied (the “Sex and the City” spinoff everyone fears).  Dany tells her handmaiden that the Unsullied aren’t preoccupied with what’s under their dresses, but on second thinking, they decide they don’t really understand the extent of the soldiers’ castrations.  Grey Worm then shares a private moment with Missandei where nothing gets accomplished beyond the two of them agreeing they were glad she stood up for him to see all of her.  This type of unnecessary sequence drives the sense of urgency off principal characters like Bran, Arya, and Sansa.  Bran’s narrative grows less compelling when, in the book series, his story becomes perhaps the most integral. HBO’s motive to make money is universally understood, but now it’s coming at the expense of the narrative. We have no idea where Rickon and Osha went/ are, but thank goodness we know that Daenerys’ crew observes hygiene.

The camera then takes back to the North in order to view Moat Cailin for the first time, as it was included in this week’s opening titles.  Ramsay Snow prepares Reek for his assignment: infiltrate the castle “undercover” as Theon Greyjoy and convince the Ironborn to give it up to the Bolton army.  Reek manages to hold it together for a time, giving his word to the Ironborn that their lives will be spared upon surrender.  Of course, Ramsay doesn’t spare their lives—killing and flaying all of the Iron Islanders.  Later on in the episode, Roose appears to give Ramsay the royal documents legitimizing him to Ramsay Bolton. Iwan Rheon and Michael McElhatton play off of each other so well, creating a father-son relationship never quite seen before on the small or large screen.  Roose didn’t even punish Ramsay for flaying men as he did in the book, which I enjoyed. The series takes the stance that Roose is Warden of the North and has no illusions about such a title.  You understand correctly, Ramsay is heir to the North.

After this, the camera takes us to the Vale of Arryn where Petyr Baelish undergoes questioning about the death of Lysa Arryn.  The panel of three (who refer to Lysa as an “odd fish”) seem convinced that Littlefinger killed the Lady Arryn, but none can crack the calm lord.  The inquisitive council calls Littlefinger’s niece, Alayne, to testify as she was a witness.  Sophie Turner then kills it in a turning point for Sansa Stark as she reveals just how well she’s learned to play the game of thrones, telling only the convenient, largely unimportant truths to cover up the sinister ones which the council can’t prove.  Who really paid attention to the case after she revealed her true identity as Sansa Stark? Her grand, spectacular misdirection that amounts to nothing in particular concerning the murder shows just how brilliant Sansa has gotten from observing Tyrion, Cersei, Littlefinger, Varys, Olenna, etc. She knows a simple when she sees it. In the next scene, Littlefinger takes a stroll with the council where he announces his intent to make a man out of sickly, orphaned Robin Arryn. Littlefinger aptly points out that Robin should leave the nest and visit the other lords of the Vale.

Ser Barristan Selmy receives a letter from Westeros.  The letter is Ser Jorah Mormont’s royal pardon signed by King Robert I Baratheon himself for his service in spying on Daenerys Targaryen for the crown.  Selmy does Mormont a gentleman’s favor and confesses that he will then take the letter to Daenerys when they’re done speaking.  Barristan also tells Jorah that he’ll never be alone with her again.  The next scene involves Jorah begging for a private explanation with his queen.  Daenerys doesn’t forgive him and banishes him from her army with his pardon.  When we last see him, Jorah leaves Meereen alone on horseback.

After Ramsay learns of his new name, we return to the Eyrie where Littlefinger interrupts a sewing Sansa. Clearly impressed at her crafty alibi, he asks her why she lied for him.  She replies that she lied because she knew he’d be killed.  From here, Littlefinger surmises that Sansa has taken the “Better the devil you know…” path in regards to her decision to lie. He asks her if she thinks she knows him, to which Sansa replies that she knows what he wants. “Do you?” he asks with curiosity. The camera then takes us outside of the Eyrie as Arya and the Hound approach the Bloody Gate. Arya discusses her disgust in at least not witnessing King Joffrey’s death as it would’ve given her great satisfaction.  The Hound announces himself and Arya Stark.  The gatekeeper informs them of Lysa’s death three days prior to their arrival.  Arya then bursts out laughing unashamedly at this news. What’s another setback for these two?  She’s almost completely separated herself from the fear of and desensitized to death. We return inside the Eyrie as Robin confesses to Littlefinger how terrified he is to leave as his mother confined him both physically and psychologically to the castle during her life.  Sansa then materializes, looking similar to Catelyn Tully in both dress and appearance at the same age, setting Littlefinger’s synapses ablaze. “Shall we go?” she asks the two lords.

The episode’s final sequence has built exponentially in anticipation ever since Joffrey died and Tyrion was implicated.  Today someone pays the piper and the gods will see that justice is done.  Tyrion and Jaime await the trial in Tyrion’s cell and reminisce over simple cousin Orson Lannister whom they both fondly remember for squashing beetles. I’ll admit I laughed when they both gave their best Orson impersonation simultaneously.  What exactly was the point of the metaphor Tyrion described?   A bell summons Tyrion and he joins Oberyn and Ellaria at their respective tent. Tyrion disapproves of just about every aspect of Oberyn’s method before the battle begins and the Red Viper promises his paramour that he will not die to leave her alone in this life.

After Tywin hilariously waves Pycelle out of the arena, Ser Gregor Clegane steps out of his “corner” wielding a double-handed broadsword with one hand.  Oberyn puts on a flashy spectacle for the spectators, but the Mountain gets right down to business and thrusts for his opponent. After a good show, the Viper finally cuts the Mountain down to size (goring his solar plexus) and demands that he confess to raping and killing Elia Martell and then killing her children. The Dornish prince points out Tywin Lannister and asks who ordered the slayings. The Mountain then calls Oberyn over to confess, only to trip him first, knock out his teeth second, and finally kill the Viper by squeezing his eyes until his head combusts. The oldest Clegane brother then turns over to die next to his defeated rival.  Tywin rises and condemns Tyrion to death.

The sheer scale of the fight between the Mountain and the Viper impressed me to say the least.  All season long “Game of Thrones” has put up breathtaking cinematic sets: the Purple Wedding, Daario fighting the Meereenese champion, Arya reclaiming Needle in the pub, Tyrion’s trial, and now the Mountain and the Viper.  Television has transcended cinema with big-budget, short-order episode seasons including quality actors and bigger special effect budgets.  Imagine if other literary epics got the “Game of Thrones” treatment. Two big deaths this week, and next week’s “The Watchers on the Wall” promises a death toll in the thousands.  GoT continues to prove that no character is safe, no matter how beloved by fans, with the death of fresh-faced, well-liked Oberyn Martell from Dorne. It isn’t a shocking Stark death, but we’ll miss him all the same.