The last “Game of Thrones” for the next two weeks aired Sunday in the form of “Mockingbird”—a titular nod to Petyr “Littlefinger” Baelish’s sigil.  The episode ends with yet another dramatic, extended sequence per the routine this season.  Although Tyrion wasn’t the subject of our end sequence, he certainly pops in all over the place in this episode as he received three separate visitors.  Many stories were examined this week, including an all-new scene never featured in the book series. However, Bran’s crew didn’t check in this week, and the same can be said of Margaery, Reek & Ramsay and Stannis & Davos.  Don’t expect Yara to pop in again for awhile as her only sequence all season was original to the show, unless we hear some news about a crow with seaweed on its wings.  HBO’s top show hit a series-high in ratings for the fourth time this year.

We begin with Tyrion and Jaime shortly after the trial. They fantasize about Tywin getting screwed out of what he wants until Tyrion reveals he wants his brother for a champion.  Jaime admits his inability to be effective with a sword and declines, but not before he reveals Cersei’s champion to be Gregor Clegane, “The Mountain That Rides.”  Tyrion then asks Jaime to summon Bronn so that he might ask his friend to serve as his champion. Bronn declines later on in the episode after announcing his engagement to Lollys Stokeworth.  They leave on good terms, however, as Bronn admits he simply doesn’t think he has what it takes to defeat the Mountain, who shows up briefly to not act and accept his invitation as Cersei’s champion. Arya and the Hound fall upon a dying farmer and get real.  After debating death philosophies, the Hound puts the man out of his misery and shows Arya where the heart is located in the process, which she puts to good use later when she kills Rorge, a former cellmate of Jaqen H’ghar’s who promised to kill and do worse to Arya. After the Hound asks Rorge to reveal his name, Arya puts him down as the Hound licks his wounds from Rorge and friend’s earlier sneak attack.  The cut from the Mountain to his younger brother did not go unnoticed.

After this, Jon receives nothing but antagonisms at the Wall from Alliser Thorne and Janos Slynt.   His concerns about a Wildling attack fall upon deaf ears, even when they were spotted near Craster’s Keep. Jon suggests they fill the tunnel with rocks and water to freeze to prevent an attack.  Instead, Thorne posts Jon and Sam on the Wall for a month’s time on the graveyard beat.

Later on, Daario sneaks into Daenerys’ private chambers and what begins as Daario’s seduction of his queen turns into the other way around.  Jorah catches Daario on his walk of shame and lets Daenerys understand his disapproval until she announces that the Second Sons have departed to take back Yunkai from its masters. 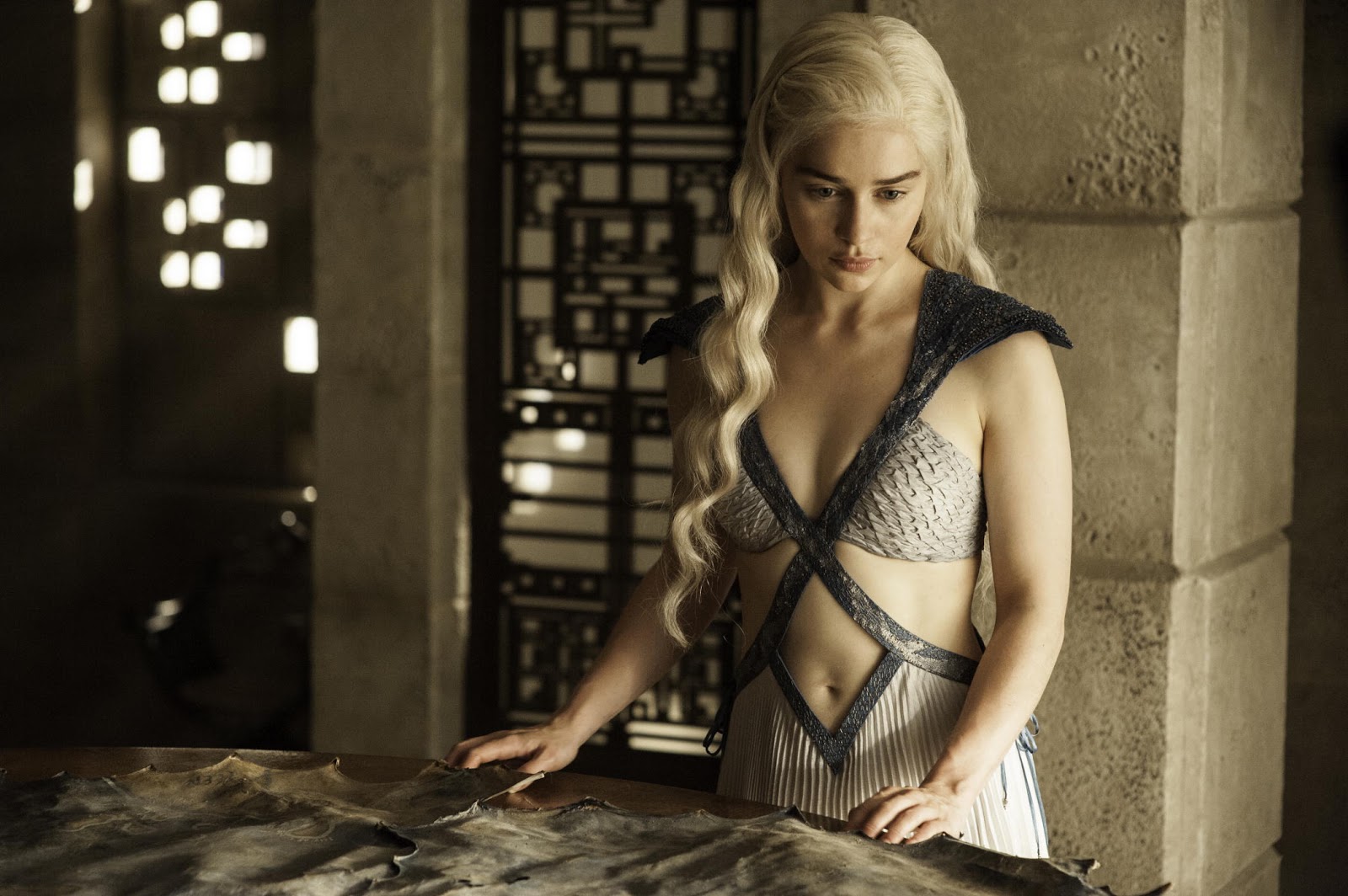 Melisandre and Selyse share an original scene that consists of Melisandre bathing and Selyse driving herself deeper into Melisandre’s delusion.  Nothing of importance really comes out here except that Selyse objects to Stannis’ idea of bringing Shireen along on their next journey.  The Red Lady finally robes and confesses that Shireen should join them because the Lord of Light will have use of Stannis’ daughter.

Arya and Sandor find a spot to camp after their encounters with Rorge and the dead farmer.  The Hound miserably attempts to tend his wounds, but fails.  Arya cleans Needle and he points out to her that her brother (Jon) gave her that sword, but his brother (the Mountain) gave him a gruesome burn and his father covered it up.  He tells her about his entire traumatic event involving the toy and the fire. The story softens Arya a bit, as the pair agrees to let Arya clean his wound before her seeming depart?  The Hound hinted that Arya is more trouble than what she’s worth and Arya had to ask him if she could clean his wound. This is the closest the Hound ever allowed himself to get with anybody on the series and Rory McCann’s sympathetic performance made the big, bad Hound look like a sad, sick puppy.

Brienne and Pod run into Hot Pie at the inn where we last left him.  She compliments the kidney pie and that’s all it takes for Hot Pie to sit down and constantly talk about his process.  After Brienne mentions her quest for Sansa Stark, Hot Pie shuts up and bails.  The following morning, Hot Pie runs outside before they leave and confesses he knows Arya Stark and that she was last seen with The Hound.  On the road, the travelers decide to head for the Vale as Sansa and Arya’s last surviving relative of wealth lives there, hoping the Hound will try to cash in on a ransom (which was totally his plan). 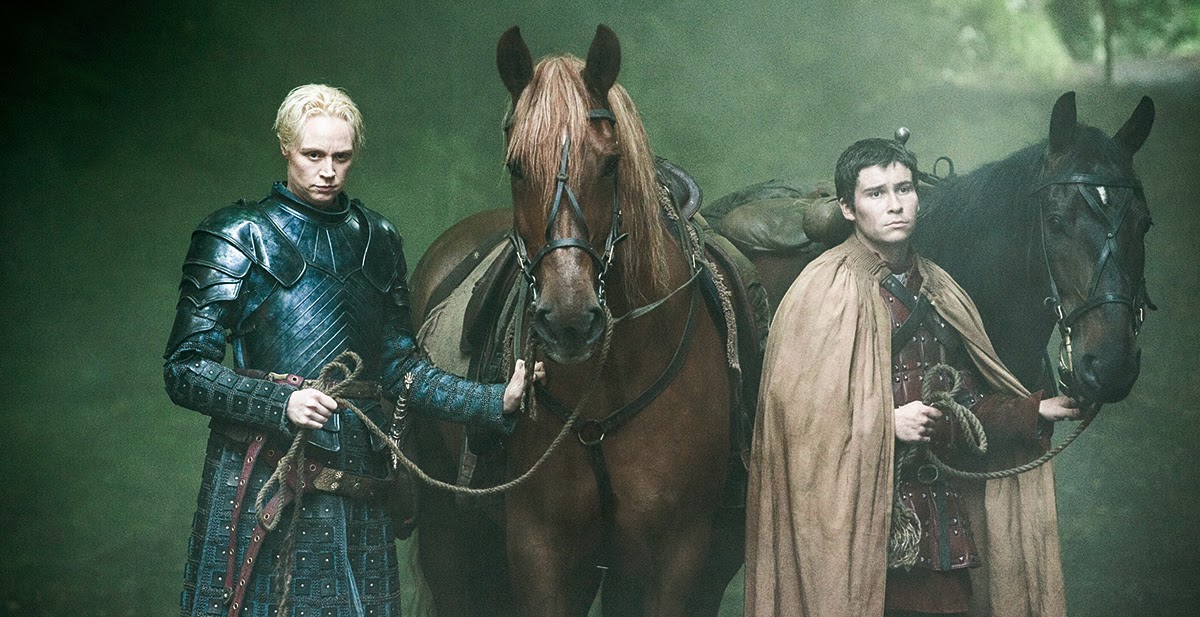 “Mockingbird” ends on two scenes with dramatic finality; with one having a tremendous amount of shock value. Chills, then thrills.  The first last scene revolves around Tyrion with his third and final visitor, Oberyn Martell.  The Red Viper confesses that he met Tyrion as a baby while visiting Casterly Rock.  Little Oberyn and his sister, Elia, wanted to see the demon baby with all of its disgusting deformities that they heard stories of back in Dorne.  Little Cersei finally revealed the baby Tyrion to her guests and Oberyn admits how disappointed he was that the youngest Lannister looked like any other baby.  The Dornish prince also tells Tyrion just how much Cersei hated her youngest brother even then and wanted him dead. “Sooner or later, Cersei gets what she wants.”  Oberyn then informs Tyrion of what he wants: justice for Elia by killing the Mountain as Tyrion’s champion as dramatic music resounds. Pedro Pascal merely sits down and tells a story but the man puts on an acting clinic, telling a story like it was his own memory. Chills.

The episode ends in the Eyrie as we catch Sansa smiling in the snow, presumably at the thought of her home in the snowy North.  Sansa builds Winterfell out of the snow until Robin Arryn pops in to ruin it as he believes all castles need a moon door.  He throws a conniption fit and Sansa slaps him.  Littlefinger appears out of the shadows to quiet the storm and takes it too far.  Lord Baelish entrusts Sansa with his real motivation behind the Purple Wedding: vengeance for Catelyn.  As he divulges his story further, Littlefinger remarks at how similar Sansa looks to his memory of Catelyn at the same age.  He kisses Sansa and Lady Lysa is revealed as a voyeur when the camera pans out over the snowfall.  Lysa summons Sansa to the throne room where she waits before the open moon door.  After an awkward beginning, Lysa suddenly grabs Sansa by the throat and holds over the moon door, threatening to kill her for kissing her beloved Baelish.  Littlefinger appears out of mysterious circumstances again to talk Lysa from releasing Sansa. Aiden Gillen’s performance as Littlefinger stands out weekly, maybe because this is all his game and everyone else just gets to play? As he consoles his wife, Petyr confesses that the only woman he ever loved was her sister before pushing her out the moon door. Thrills.

“Mockingbird” packed a lot into one episode and certainly deserved the explosive, record-setting ratings it garnered on Sunday evening.  So many wheels that appeared in neutral are now in full motion: Tyrion has a champion in the Red Viper, Brienne has a hot lead on her search for a Stark daughter, Littlefinger just eliminated any shred of evidence that he was behind Jon Arryn’s poisoning, Arya and the Hound (seemingly) parted ways, Daenerys has a clear game plan (you’d best live in her new world), but Jon is unfortunately stuck on top of the wall with Humpty Dumpty.  Will the Watchers on the Wall answer the call?  Everybody else seems to be in gear, but Alliser Thorne wants to defy Jon Snow if it kills him.