Throughout the coverage of “Game of Thrones’” sixth season, Immersion recap/ reviews break the series down by region for simplicity to the reader and to keep it brief. SPOILERS below:

RIVERLANDS/ SALT PANS: After last week’s reveal of the Hound’s survival from his epic fight in season four with Brienne, we pick up with him right after the events of the massacre. He sees a few of the men from last week while hunting them and kills them right away. At the end of the episode, he sees the Brotherhood Without Banners, still led by Beric Dondarrion and Thoros of Myr, all set to hang Lem Lemoncloak and two others. They let the Hound carry out the sentence to serve his revenge as it was the condemned men who massacred the church/ village. While sharing a meal together after a time lapse, Beric offers to let the Hound join them in their journey North to fight the real threat to Westeros. Will he join them? It was a pleasure seeing actor Rory McCann keeps the Hound’s rhythms after a year and a half off from the series when his character removed the boots off the still-shaking hanging body of Lemoncloak. /RIVERRUN: Brienne and Podrick fall upon the Lannister/ Frey siege of Riverrun on their journey to deliver a message of help from Sansa to her uncle, the “Blackfish.” Bronn runs into Pod and the two share fond memories of their days with Tyrion. Brienne meets with Jaime in his tent and offers to return his sword, but he refuses and has her keep it. She’ll need that Valyrian steel against the armies of the dead. Brienne informs Jaime that if the Blackfish refuses to surrender the castle and they fight, then her honor to House Stark will put her at direct odds with House Lannister. Jaime understands these terms and allows her to pass.

Brienne later speaks with Blackfish inside the castle, but is unable to convince him to leave with her for Winterfell as he insists upon dying before turning his ancestral home over to the Lannisters and Freys. In Edmure’s tent, Jaime tries to have a pleasant conversation comparing a mother’s love for her children between his love and sister, Cersei, and a respected noble colleague and Edmure’s sister, the late Catelyn Stark. Jaime expressly defines his love for Cersei to the captive Tully, letting him know that Riverrun will belong to the Freys whether or not a battle takes place for it because all the Lannister general cares about is returning to his great love. Jaime frees his prisoner and sends him to the castle gate. Once inside, Edmure orders his men to surrender the castle. Following a time lapse, Jaime stands on a corridor along the high castle having now assumed control and looks out over the river. A man informs him that the Blackfish died fighting before Jaime sees Brienne and Podrick in a canoe headed upstream to presumably reunite with Sansa. He waves at her and she returns the gesture. KING’S LANDING: The Faith Militant attempt to take Cersei away from the Red Keep so she may speak with the High Sparrow. The Queen Mother refuses to leave on the grounds that the High Sparrow may visit her at the castle whenever he pleases. When Brother Lancel and the others try to arrest her, the Mountain grabs one of them and brutally murders the monk to make the remaining men tuck and run. Cersei later tries to join King Tommen in the Great Hall of the Red Keep, but Kevan Lannister forces her to the gallery. From the gallery, Cersei witnesses her son’s royal decree that her and Loras’ trial will take place on the first day of the Mother and that a trial by combat will no longer stand as an option. In the midst of her shock, Qyburn tries to assure her with knowledge only he has—but what is it? MEEREEN: Varys parts with Tyrion to round up more support for Daenerys in Westeros as the two hear yet another Red Priestess preach the miracle of Daenerys is from R’hllor. Tyrion again drinks, but now tries harder to get Missandei and Grey Worm involved—even going so far as to try and get a joke out of one of them. This pleasant scene is interrupted when the masters attack the city in their ships. However, Daenerys arrives on Drogon, unpleased at what she can see. She will presumably save the city yet again. BRAAVOS: After providing another stirring stage performance, the actress Lady Crane finds a bleeding Arya behind her wardrobe. After nursing Arya back to health, the wayward Stark finds her caretaker brutally murdered by the Waif on the following morning. The assassin chases Arya through the streets of Braavos, cornering her in a dark room where Arya keeps her sword Needle hidden. A time lapse shows Jaqen finding the face of the Waif still fresh and bloody, and attached to one of the stone face holders. Obviously, the newest Faceless recruit bested her teacher. He tells Arya she is finally no one, but it’s too far gone and she can’t reconcile her own kind (the Faceless Men) coming after her. So instead, our young hero declares herself, “Arya Stark of Winterfell,” and presumably tries to re-book passage to Westeros. 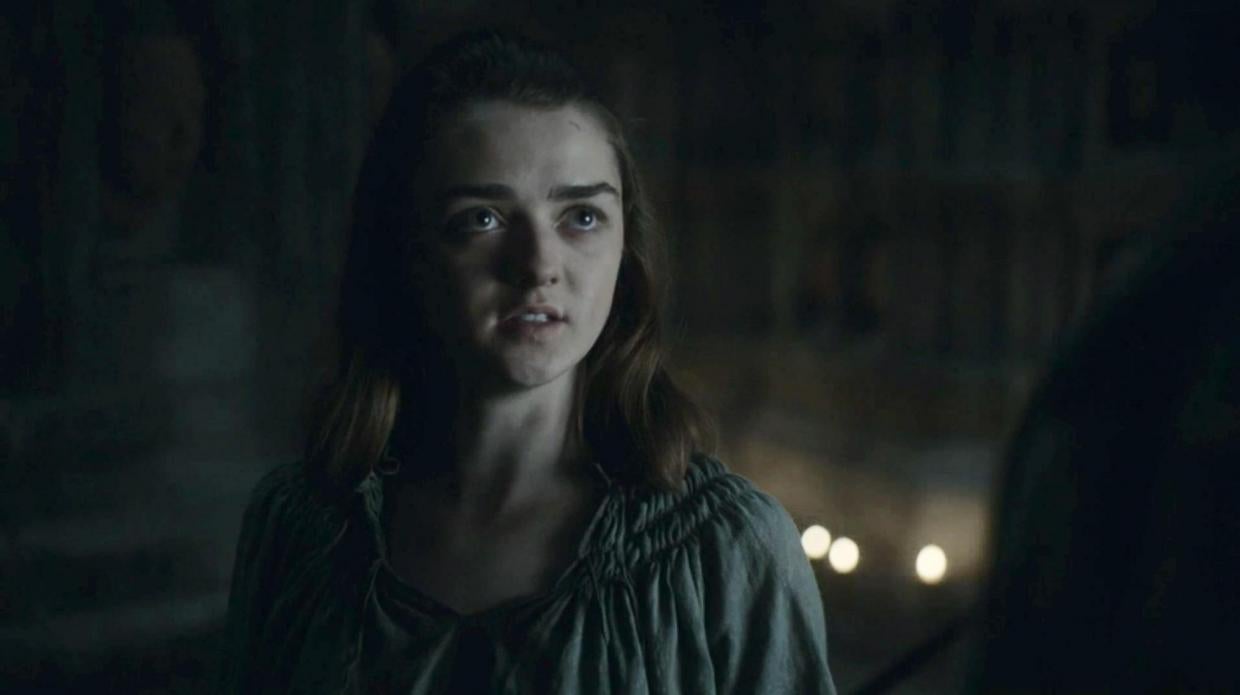 Another ho-hum week for “Game of Thrones.” All the action that wasn’t a chase scene took place off screen: Lady Crane’s death, Blackfish’s death, the Waif’s death, Daenerys’ reaction, and Qyburn’s news. Again, a few plot threads advanced ahead, such as those belonging to Jaime, Brienne, Varys, and Daenerys, but not a whole lot was shown beside a few particularly pleasing establishing shots. Next week’s episode will surely please fans with the director of “Hardhome” returning to helm another epic Jon Snow adventure in “The Battle of the Bastards.”