Full spoilers. To keep them brief, “Game of Thrones” recaps have been blocked by region in Immersion’s coverage for the hit series’ sixth season. Still no more Dornish activity since the season premiere and Tower of Joy flashback keeps us in perpetual suspense on both fronts. Sam and Gilly have only checked in the one time and have yet another week off. For the first episode, all Lannister and Tyrell activity in King’s Landing take a break, as well.  Rickon and Ramsey also don’t appear this week after Osha met her end last week.

IRON ISLANDS: Following the death of Balon Greyjoy, Salt King of the Iron Islands, Aeron Damphair facilitates a Kingsmoot. Balon’s daughter, Yara, and brother, Euron, make claims for the Iron Throne. Despite Theon throwing his favor behind his sister and providing another riveting speech reminiscent of his second season soliloquy at Winterfell (before getting bopped on top of his head), Euron admits paying the iron price for the Iron Islands—something the common people of the Iron Islands absolutely adore. He also lays out his plans to form an allegiance with Daenerys Targaryen to invade Westeros before Theon and Yara escape with the best ships in Euron’s recently-won fleet.

BRAAVOS/ HOUSE OF BLACK AND WHITE: Arya and the waif spar with staffs until Jaqen appears for another unexpected profundity. This time, however, Jaqen gives Arya another target for assassination—an actress in a theater troupe. Arya visits a presentation of the troop’s play, which happens to involve: the death of Robert Baratheon, the death of Ned Stark, the ascension of Joffrey, and the marriage of Sansa to Tyrion. Arya’s target plays Cersei in the production and enjoys drinking rum backstage. She reveals her plan to Jaqen, which involves poisoning the actress’ rum. Jaqen lets Arya know that if she fails to complete her task, the many-faced god still requires a life/ face.

VAES DOTHRAK: Shortly after Daenerys epic uprising from “Book of the Stranger” she meets with Jorah and pardons him his crimes for all he’s done and recognizes all that he risked to save her. He shows her his greyscale and she orders him to find a cure so that he might serve her better in the future.

MEEREEN: Despite some uncharacteristic sassiness out of Varys, Tyrion manages to enlist the support of a Red Priestess not unlike Melisandre or the one he met in Volantis last season before Jorah abducted him. The Red Priestess declares Daenerys to be Azor Ahai, even though Varys knows Melisandre made a similar announcement in regard to Stannis Baratheon during the series’ second season. Despite a shaky meeting, Tyrion and Varys appear to have the support of a powerful practitioner of R’hllor. 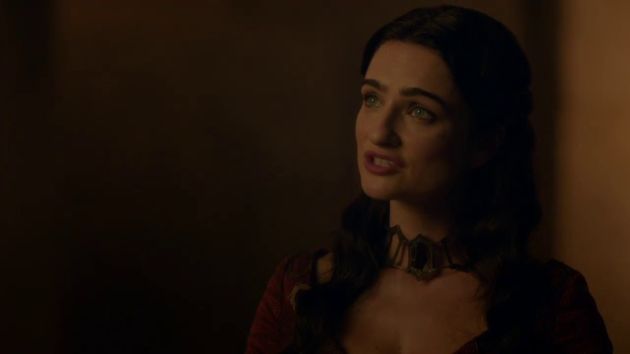 CASTLE BLACK/ MOLE’S TOWN: Littlefinger arrives in Mole’s Town for a secret meeting with Sansa, informing her that her uncle Brynden “Blackfish” Rivers has amassed an army of the Riverlands and would certainly align his forces with her northern Stark armies. He also offers his knights of the Vale. Sansa informs Jon’s council-of-sorts of this information (and lies about the source), turning the tides of strategy. They agree joining all the many, smaller Northern houses will be just as good as getting the few large ones for battle. With Sansa and Jon leading House Stark, who will oppose them beside Ramsey Bolton and the larger houses of the North? They leave Castle Black with Melisandre, Brienne, and Podrick.

BLOODRAVEN’S TREE: In the first scene north of the wall, Bloodraven takes Bran to the very location they sit, only eight-thousand-plus years ago when the weather was pleasant and the land was green, not snowy. The Children of the Forest perform some blood sacrifice magic ritual and turn a man into a White Walker. When they snap out of the vision, one of the Children tells Bran they were desperate in a war against the First Men and created the White Walkers in defense. In another vision, Bran sees the army of the dead and the Night’s King, who can see Bran and marks him for elimination. Bloodraven warns them to leave shortly before the army of the dead arrives, and arrive they do, but while Bloodraven and Bran are locked in another memory-vision looking in on young Ned Stark leaving for Jon Arryn in the Vale as young Hodor looks on from the stables. While Meera tries to snap them out of it, Bran starts hearing her voice in his vision. Young Hodor also hears it and can’t quantify it. Bloodraven urges Bran to leave and waits in the tree to accept his fate.

In the midst of all this, present-day Hodor joins the same weirwood network and carries Bran out of the giant weirwood tree on his back. The camera cuts between present and past Hodor, with present Hodor tapped into the past, present, and future via the weirwood magic while also holding the door to the tree closed as the army of the dead descend on Bran as past Hodor begins having a seizure on the ground. In the present Meera cries for Hodor to “Hold the door” as they take Bran away while in the past, Hodor keeps shouting “hold the door” in a seizure until it becomes “hodor.”  Hodor holds the door to the weirwood tree closed long enough for Meera to carry Bran into the darkness of night as the army of the dead claw their way through the door, inevitably killing him. Learning the meaning behind “Hodor” was as rewarding as it was heartbreaking. Getting stuck in some sort of sad, time death loop was a tragic reveal for one of the series’ most-beloved characters. Perhaps the most heart-wrenching death on “Game of Thrones” to date, and we’re only half-way through the sixth season. It appears many fan theories were confirmed when Hodor's entire arc was based on Bran's well-being, serving as his protector to the end potentially since the seizure- which was before Bran's own existence!