Recaps have spoilers“Game of Thrones” and “A Song of Ice and Fire.”

After some exciting developments in “The Gift,” “Hardhome” takes these developments a full step ahead to make perhaps the best “Game of Thrones” episode without a deadly wedding. The episode opens in the queen’s Meereenese courtroom.  Tyrion and Jorah stand before Daenerys as she ponders what to do with them. She hasn’t made her mind on the newly-discovered Lannister and keeps him around at least for now, but excuses Jorah with his life intact upon Tyrion’s advice. Jorah, distraught and beleaguered by her decision, has no choice but to accept her ruling. The Mormont fugitive stares at his greyscale infection when he reaches the outdoors. Director Miguel Sapochnik then takes us across the Narrow Sea to King’s Landing to catch up with the queen mother following her imprisonment last week. Cersei broods in her cell, hateful and angry, as a Silent Sister tosses some bread at her and offers water if she will confess to her crimes.  Cersei reiterates a statement from last week about her face being the last thing her captors will see before meeting their demise.  The sister clubs her with the serving spoon, spilling the water.  It looks like the former Baratheon queen will learn a brutal lesson in humility.

We’re then taken back to Essos, inside the House of Black and White, where Jaqen prepares Arya for a mission.  She recites key facts about the identity she’ll assume when acting as an agent for the many-faced god. The scene then intercuts with “Lana,” Arya’s new identity, as she pushes her oyster cart about Braavos to look for her mark.  Jaqen gives her no description of the mark, leaving Lana to figure out what the many-faced god has in store. An old, loud curmudgeon stops her and asks to buy four of her oysters with vinegar.  As Lana applies the vinegar, she overhears the man make a rather cold, mean ruling. Jaqen tells her the man is a bookie/ gambler of sorts who rips off servants of the many-faced god. As extensions of this deity, Jaqen implies it’s their duty to restore order and hands over “a gift” for Arya to give the bad man—a vial of poison, the gift of death. Looks like Sapochnik wasn’t finished with that motif after last week. Back in Cersei’s cell, Qyburn arrives with a lot of news: Tommen no longer eats out of depression from his wife’s and mother’s imprisonment, Pycelle has sent for Kevan Lannister as Hand of the King, and no word from Jaime in Dorne. He tells her that all of this hell will go away if she simply confesses to her many counts against the gods. Cersei obviously refuses before Qyburn gives her a positive status update on his project—FrankenMountain, Ser Robert Strong. Over at Winterfell, Reek arrives in Sansa’s chambers to deliver her meal.  She immediately calls him out on giving her up to Ramsey—an act he claims was a favor as he surely would have found out eventually and only punished her harder. How’s that for a glimpse of his damaged psyche? Sansa boldly confesses that she would have tortured Theon Greyjoy same as Ramsey because of Theon’s great betrayal to House Stark: turning against Robb and murdering her two little brothers.  Reek, however, confesses that he killed two of the farmer’s boys when the Greyjoy forces couldn’t locate Bran and Rickon in the second season. This gives Sansa a glimmer of hope and a shiny nugget of information for Littlefinger if she ever gets a chance to send word. We then jump to another room in Winterfell where Roose, Ramsey, and the other leaders of Bolton forces discuss battle strategy. Roose suggests they hold up in Winterfell as they can survive a siege for six months, but Baratheon forces could hardly last so long out in the unyielding northern winter.  Ramsey, however, wants twenty “good men” to take the fight to Stannis.

Back in Meereen, Tyrion resumes his wine habit as he and Daenerys discuss his presence in her court. They talk about having bad fathers in different regards before moving on to Westerosi politics.  She has no remaining members of her house and will hardly receive a warm welcome or large following without support of a major house.  Tyrion ponders which houses will help her: the remaining Lannisters will not, the Starks are all but extinct, Stannis Baratheon will defy her claim in favor of his own, maybe the Tyrells? These families make no difference to the queen who says they are but spokes on a wheel that she intends to crush. After Tyrion explains what he presumes to be Varys’ involvement in the whole, wide game of thrones (blows raspberry), the queen decides she will spare Tyrion’s life so that he may advise her.  We then jump to Jorah, as he rejoins the slaver who bought him in an attempt to achieve glory in the fighting pits. This is his last-ditch effort to please Daenerys and win his place back her good graces. Sapochnik then takes us to Cersei’s third visit of the episode.  It’s the Silent Sister again with the same pitch as last time.  Cersei half-bribes, half-threatens her before the religious woman turns the ladle upside down to pour the water all over the cell floor.  When the sister departs, Cersei approaches the spilled water and desperately tries to slurp what she can off of the filth. This may have broken her. 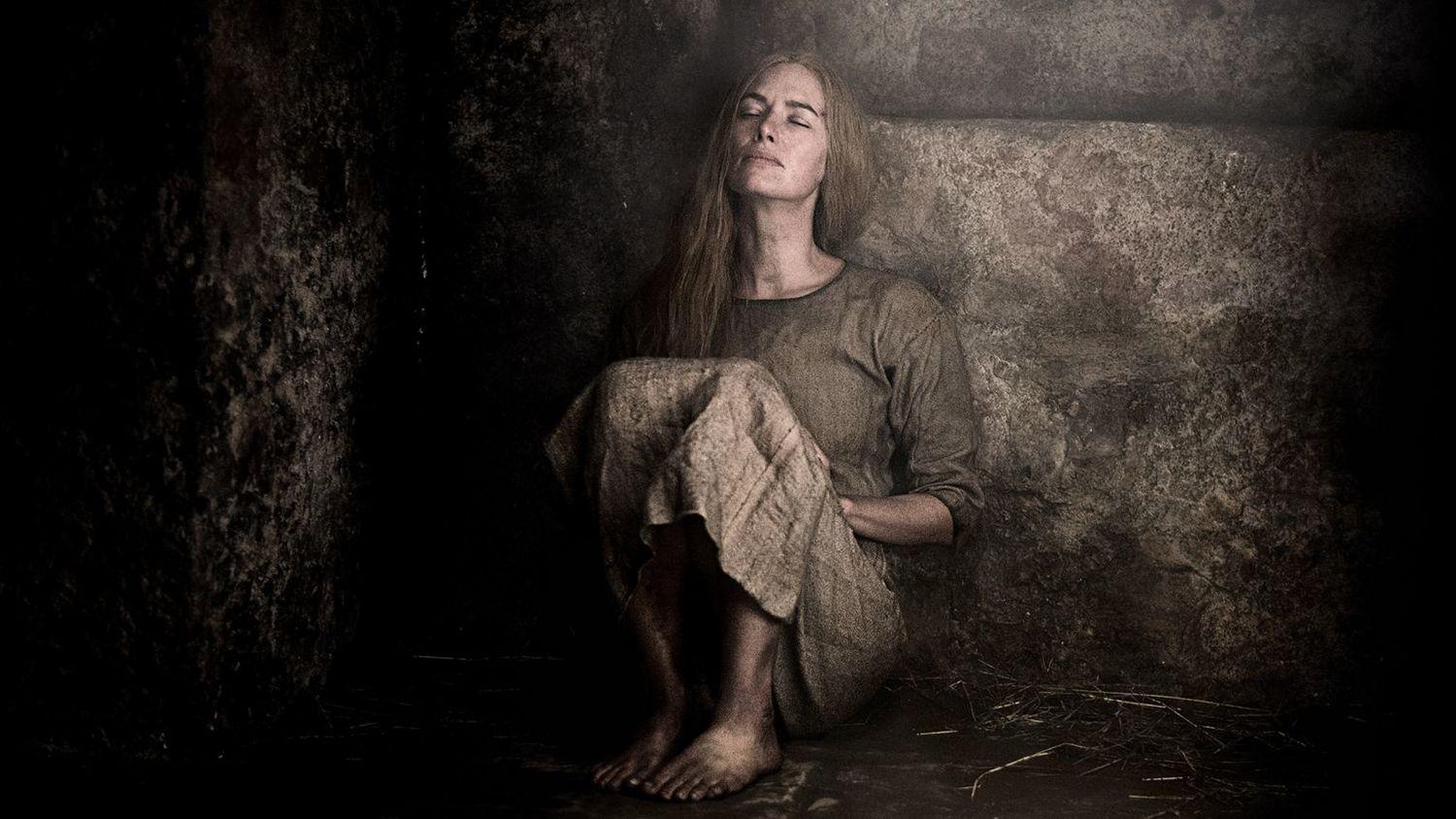 At Castle Black, Gilly tends to Sam’s injuries that he received from fighting her attackers in “The Gift.” Olly arrives with a meal for Sam after finding out about the scuffle and asks why Jon would ever align himself with the people who “slaughtered” his family. Gilly dismisses herself to check on “Baby Sam.” Grown Sam explains Jon’s position that, in the long run, it’s much better to have the wildlings alive as their allies because they will just add to the increasing population of the army of the dead—a sight he’s personally witnessed. Olly has no need to worry about Jon, because Sam explains that he “always comes back.” Sapochnik then takes us to Jon Snow as we follow his segment for the second half of the episode. No King Tommen, Littlefinger & Olenna, Loras & Maegaery, Brienne & Pod, Jaime & Bronn, or Stannis, Davos & Melisandre. The Hardhome sequence of “Hardhome” is rumored to have cost more than the entire “Watchers on the Wall” epic episode that solely featured the battle for Castle Black against Mance Rayder’s wildling army. It appears Old Nan’s tale of the Long Night and the Last Hero have returned as George R.R. Martin reminds in his saga that history tends to repeat itself in a vicious cycle.

Jon arrives at the titular wildling settlement with ships he borrowed from King Stannis.  When they make shore, the wildlings are taken off guard to see that Tormund has allied with Jon Snow. The wildling leader curses the Crows and Tormund for joining them, prompting Tormund to outright murder him in the center of the crowd for getting the way of progress.  The elders gather in a large tent to listen to Jon’s pitch.  The Lord Commander admits they will never be friends, confesses but that it’s in everybody’s best interest to fight together against the greater evil—the demonic, frozen zombie army of White Walkers and their wights.  To sweeten the pot, he offers them dragonglass to defend themselves against the army of the dead and lands south of the Wall to settle and farm. Most of the wildlings agree to these terms, except the Thenns, but everybody expected that. We jump a little bit further in time as five thousand wildlings begin departing Hardhome to board Stannis’ ships. Tormund assures Jon that the remaining wildlings will change their tune as they run out of supplies with nothing around to hunt or grow. A giant examines some dragonglass that Edd wants to collect. Being a giant, Edd decides to leave well enough alone. 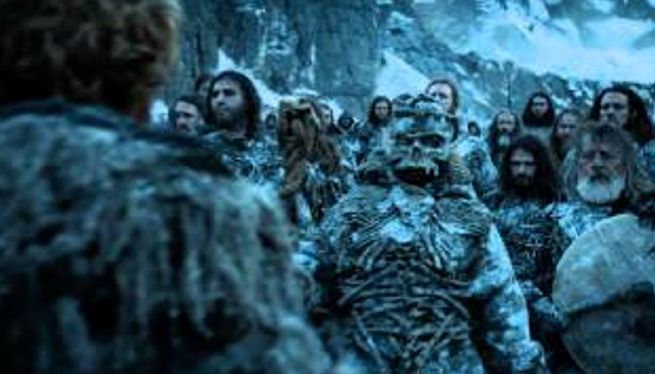 It quickly becomes apparent that the Night’s Watch arrived not a minute too late as the winds of winter stir up a snow storm that causes the dogs to bark without stopping.  The White Walkers’ army of the dead appears before the gates to conquer Hardhome and all the living inside of it. The people hurry to close the gates, subjecting several people on the other side to the army right off the bat. The citizens scurry for the rowboats to take them to the Baratheon fleet ships as the army of the dead eventually breaks the gate open and begins wreaking death and destruction. Tormund and Jon realize the people need some sort of force to fight off the invaders to provide a distraction. The Lord Commander calls his small force to attack the wight army and defend the escaping citizens. During this sequence, Jon meets a White Walker chieftain on the battle field and they fight for a while.  Our hero reaches for the dragonglass to defend himself, but can’t quite keep a grip on a shard.  It’s only when Jon retrieves Longclaw—his Valyrian steel blade which the last Lord Commander gifted him in the second season—that he’s able to ultimately defeat his monstrous attacker. However, Jon and Tormund agree that they can no longer fend off the zombie horde and rush to the ships in order to make it out alive. As they board ships, the giant enters the water, flicking wights off his shoulders, and walks toward a ship. When Jon’s boat drifts away, the Night’s King emerges on the docks to raise all the slain wildlings from the dead to join his army. Jon stands at the bow of the lifeboat and makes long, weary eye contact with the Night’s King, who revealed himself in last year’s “Oathkeeper.” Blink and you'll miss band members of Mastodon as wildling extras.  Winter has come for Hardhome and it’s headed for Castle Black.

What an exhilarating finish to episode of television. No complaints here as Weiss and Benioff showed the sheer numbers of the White Walkers’ army of the dead. The numbers are insurmountable and the Night’s Watch will need all hands on deck if they are to defeat this evil force. If only the other characters in Westeros and Essos kept their eyes on what really mattered, maybe the undead army wouldn’t seem so impossible to defeat. Sapochnik has almost single-handedly saved the fifth season of “Game of Thrones” after some lackluster, filler episodes really slowed the pace and didn’t make too much of a difference.  With “Hardhome,” the writers make a clear statement that winter has come and won’t hold back.