“F is For Family” joins “BoJack Horseman” in Netflix’s expanding animated comedy lineup for grown-ups with a similar balance of humor and reality checks.  Comedian Bill Burr (“Breaking Bad,” Date Night) offers a six-episode season based on his childhood that offers perpetual laughter with brutally uncompromising comedy, often taking brief moments to let the harsh reality of lower-middle class life in 1973 take hold.  The series also pokes fun at 1970s life in general, as the oldest son harbors a passion for the rising trend of fantasy metal in the form of a band called “Shire of Frodo,” for example. Burr’s new series not only stands as comedy gold, but also a thorough examination of depressing 1970s socio-economics and its effect on an entire family unit.

Burr wrote, produced, and provided the voice for protagonist “Frank Murphy.”    Frank comes across as yet another animated TV dad who shares the similar world-weariness and aggressive attitude as Hank Hill from “King of the Hill” while spewing backward nonsense (often misogyny) as “Family Guy’s” Peter Griffin. Like Peter, Frank also has a depressing job, a drinking problem, balances a rocky marriage, and co-raises two sons and a daughter. Hank had Alamo beer, Peter has Pawtucket Patriot, and Frank has White House draft beer. The opening credits feature Frank flying through the sky after graduating high school—“flying” through life—while new challenges keep hitting him in the face as he progresses through adulthood, ultimately crash-landing in a normal home and sitting on a couch with his family.  These titles aren’t a subtle metaphor because Frank isn’t a typical cartoon dad.  We learn about Frank’s dreams of becoming a pilot getting dashed the moment he found out he fathered a child. He carries a darkness with him from his days of fighting in Korea and hasn’t been able to shake it since, allowing his angry outbursts to occur exponentially at the expense of his wife and kids.

Somehow, Burr finds the humor in this situation, amplifies it, and exploits just how hilariously unprogressive many societal members functioned in 1973 (and even today, unfortunately).  He orders his daughter to not dress up as fictional male characters for Halloween because she isn’t a boy and also tells her that women can’t be astronauts. Frank also openly refers to his oldest as a “flunky” and curses without a filter in front of anybody he pleases while hating his next-door neighbor for simply enjoying a happier existence. 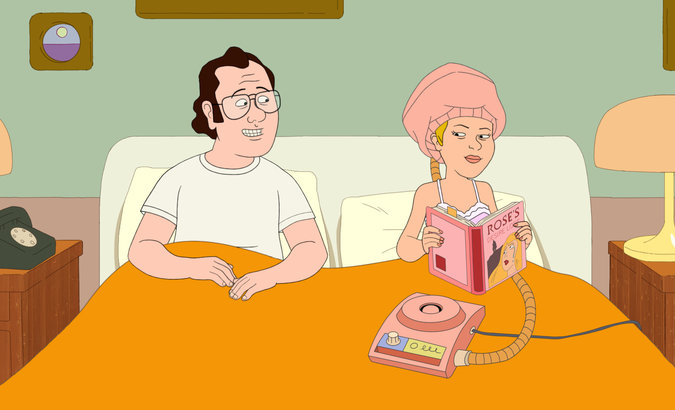 Laura Dern (Jurassic Park, Wild) provides the voice of Sue, wife of Frank and mother to his children. She works part-time selling Tupperware in addition to her role of stay-at-home mother. Frank constantly undermines her and takes her for granted. These jokes typically fly for “Family Guy,” but “F is for Family” examines just how much blatant, unconscious misogyny affects women of all ages. The series indicts misogyny with humor, refusing to condone the mistreatment of women often seen in many Seth MacFarlane-produced programs. It’s okay to laugh—but only if one truly understands the latent humor behind the initial, obvious joke.  Like much of Burr’s stand up, each joke simply grows funnier the more one contemplates it.

Six episodes provide an excellent, small arc around each character, but ultimately leave the viewer wanting a more complete season with at least four or five more episodes.  Like Bill Burr’s stand up, the comedian’s new animated comedy series refuses to see things as anything else than what they are (or were, in this case). The comedy and situation are brutally real, and the show’s content often gets too real as brief, unnecessary cartoon depictions of genitalia flash once or twice on screen to reiterate that Burr isn’t afraid to get brutally honest when remembering his childhood. It’s a brave endeavor to put your childhood out there for everyone to analyze, and it’s an even more impressive feat that he found the humor in there.