The man without fear

The ever-expanding Marvel Cinematic Universe broadened to Netflix Instant Streaming on April 10th; premiering all thirteen episodes of the first season of “Daredevil,” the MCU’s third television endeavorfollowing Disney/ ABC’s “Agents of S.H.I.E.L.D” and “Agent Carter.”  “Daredevil” is the first of four (potentially more) Marvel properties existing in the same universe scheduled to hit Netflix in series format. Next year, the widely-used streaming service plans to release “A.K.A. Jessica Jones” and “Luke Cage” with the potential for “Iron Fist” in 2017.  It seems the popular comic book super hero group “The Defenders” are forming for a sort of event.

While superheroes Iron Man & Captain America battle terrorist organizations, Thor & the Guardians of the Galaxy take on cosmic warlords, and Black Widow & other S.H.I.E.L.D agents fight in the shadows, somebody has to clean up crime on the street level.  Enter Matt Murdock (Charlie Cox—The Theory of Everything, “Boardwalk Empire”)—a blind, orphaned lawyer living in the Big Apple.  Following a tragic, childhood accident (as comic-based stories tend to go), Matt’s other senses developed and enhanced following the loss of his sight. Over the course of his adolescence, he developed superior combat skills despite his disability due to the heightening of his remaining senses.  As an adult, he took on the responsibility of masked vigilante justice to keep the peace in Hell’s Kitchen, where he practices law by day alongside his best friend, Foggy (Elden Henson—The Hunger Games: Mockingjay- Part 1, Jobs).  Using this dynamic, “Daredevil” becomes the first crime-drama in the MCU and a captivating one at that. Showrunner Steven S. DeKnight (“Spartacus: Gods of the Arena,” “Angel”) went on record several times about “Daredevil” functioning primarily as a crime-drama, and secondarily working on the costumed hero aspect.  The series balances this concept well.  Matt Murdock can compel a jury just as easily as Daredevil can incapacitate a small squad of mercenaries. DeKnight is also well-known for his violent spectacle while running the once-popular “Spartacus” and unlike any other MCU property, “Daredevil” earned a mature rating (TV-MA in America) due to its graphic, bloody violence.  The dialogue also sounds a hair filthier than the MCU films and broadcast network series, but still manages to avoid R-rated language.  Daredevil’s martial arts skills leave his opponents with crunched, broken bones, coughing up blood, laying in comas, and usually a few inches away from death—but never all the way.  The second episode, “Cut Man,” features an impressive, extended fight scene that seems like one shot to the untrained eye.  One character decapitates another in a most unexpected, gruesome process in a later episode as other men merely look on without a second thought.  In a world full of terrorist attacks—be it foreign, domestic or Chitauri aliens—the streets of Hell’s Kitchen hardly factor on a superhero’s radar and Daredevil must use extreme brutality to defend the innocent against scum who benefit on the absence of authority.

DeKnight and Drew Goddard (The Cabin in the Woods, upcoming Spider-Man reboot) cast their series perfectly with established veteran character actors and up-and-coming stars. DeKnight and Goddard hail from “Marvel Godfather” Joss Whedon’s usual team of writers, so their intricate involvement in all decisions here hardly surprises anybody. Charlie Cox proves he was the actor that producer and Marvel’s Head of Television Department Jeph Loeb (“Agents of S.H.I.E.L.D.,” “Agent Carter”) wanted all along to play the burdened protagonist.  While the writers certainly draw from other heavy crime-drama/ superhero adventures like The Dark Knight or The Punisher, Cox manages to find a sense of humor in his character that keeps the lighter Marvel Comics vibe alive.  His courtroom presence also has an air of genius in “Rabbit in a Snow Storm” that makes young star Cox’s performance the definitive Matt Murdock/ Daredevil. Elden Henson plays Matt’s legal partner and best friend, Foggy Nelson. Henson brings the charm and kind quality of the comic book character while also making the role uniquely his own—coming to terms and reconciling just where he stands in the craziness going on in New York following the disastrous Chitauri invasion from The Avengers.  Deborah Ann Woll (“True Blood,” Ruby Sparks) also stars as a frightened, intimidated potential client for the two best friends whose relationship with her lawyers develops into a working/ friendly one.  Her search for the truth behind the crime in Hell’s Kitchen puts her in Daredevil’s path, as well. 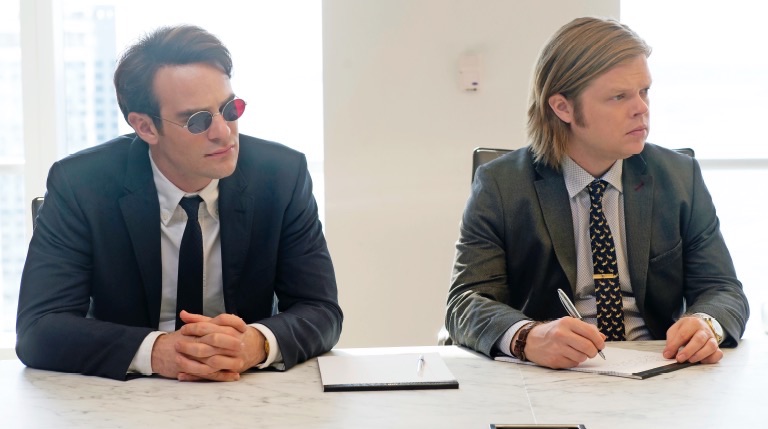 The veteran talent, however, is more impressive. Vincent D’Onofrio (Run All Night, “Law and Order: Criminal Intent”) plays the series’ main antagonist, Wilson Fisk, with an incredible balance of sensitive calm and savage ferocity.  Fisk’s criminal enterprise profited from the Battle of New York between Loki’s army and The Avengers and begins a reign of fright in Hell’s Kitchen. Only few actors could make the audience take Fisk seriously and D’Onofrio not only accomplishes this, but also strikes fear every time he walks into frame.  Rosario Dawson (Sin City, Top Five) also appears in a few episodes as Claire, a doctor with a kind disposition who aids and requires aid from Daredevil.  Character actor Vondie Curtis-Hall (Romeo + Juliet, “Chicago Hope”) takes on the role of aging, crusading journalist Ben Urich.  Despite Urich’s pessimistic disposition, his devoted, diligent search for the truth puts him in the trajectory of the good guys and the bad.  DeKnight treats viewers to Scott Glenn (Training Day, Sucker Punch) guest starring in the seventh episode, “Stick,” as the titular character— adolescent Matt’s martial arts mentor.

Brandishing a mature rating, the series gets more freedom to experiment with shocking moments/ conclusions which leads to an elevated level of uncertainty due to the lack in predictability unseen before in the MCU.  With this freedom, the series never feels the need to heavily focus on the main character’s well-known origin and instead incorporates flashbacks throughout the episodes as they apply to his current predicament. While the superhero must always, eventually showdown with the supervillain like the westerns of the sixties and seventies, Netflix/ ABC’s “Daredevil” has just enough tension and suspense to operate as an action-packed, exciting crime-drama.

Cox’s Murdock and D’Onofrio’s Fisk serve as perhaps the most accessible, relatable superhero/ villain combination in the huge Marvel blockbuster franchise of film and television.  We’ve seen characters like them before in all forms of media, but not on this scale.  The subtle, yet necessary nods to the greater franchise are appreciated, if they aren’t just cool for fans.  In “Daredevil,” Netflix establishes yet another “A” series while teaming up with a broadcast network to help viewers/ fans/ critics stream exactly they want to watch.