After last week’s season highlight, “Community” keeps the laughs going in “Wedding Videography.”  The episode opens in Jeff’s classroom as Abed films the goings on—the entire episode is from Abad’s camera’s point of view.  Jeff prepares a drink with some ice he pulls out of his desk as Garrett (stand-up comic Erik Charles Nielsen) begins a slideshow presentation project for extra credit. What humbly begins as a presentation about Marital Law quickly turns into a marriage proposal for Stacy, Garrett’s girlfriend who is also in Jeff’s class. She accepts and we cut to documentary-type interviews for Stacy and Garrett explaining the history of their relationship.  Abed reveals to Jeff that Garrett asked him to be there for the surprise proposal in order for the family to see it.  When the opening titles conclude, Britta walks in on Annie and Abed shooting “missing lover footage” in the event of Annie’s death or disappearance.  This develops into Britta and Annie shooting interviews and arguing who gets to interview over who has to clean the apartment. These two then debate nail polish tones as they prepare for Garrett’s nuptials. Frankie arrives to get ready with the other ladies, but then privately admits to the camera that she isn’t very good at bonding with other women. A painfully awkward conversation over drinks follows until the gentlemen (Jeff, Chang, Elroy, and the Dean) break in and shout, “Panty Raid!”  Annie and Britta then admit they “padded the time” so the guys could get ready on time for the wedding.

After Jeff speaks with Abed/ the camera about synergy (or what Frankie calls “codependency” upon her interjection), the group plays their own version of a wedding game, “Celebrity Garrett Marriage” where one of them plays Garrett and another one plays a celebrity to marry Garrett.  The impressions really kick up some laughs, especially for core fans who can truly appreciate these rotating Garrett impersonations among the cast. While speaking with the camera, Britta and Annie realize the group is late for the wedding because they’ve been playing Celebrity Garrett Marriage too long. The group snaps into gear and arrives late for the wedding that Todd philosophically, hilariously officiates. Garrett begins his vows and the group stirs up a little too much noise as they enter to upset the people already in attendance. Chang falls over some shrubs when Stacy begins her vows to Garrett. Chang’s chair breaks as he sits in it, causing laughter.  Todd pronounces Garrett and Stacy as man and wife, but Garrett looks miffed at the trouble already started by the group. At the reception, they all think they’re “nailing” the wedding until Garrett’s mother (special guest O-Lan Jones) reminds them to get a little perspective regarding the day because of their constant interruptions. 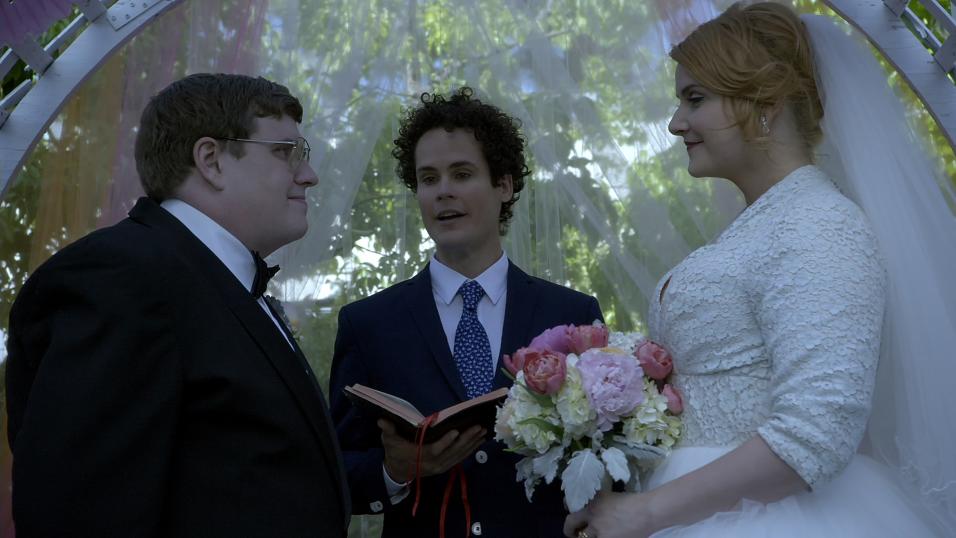 The group takes Garrett’s mother’s words to heart and each member sets out on improving the wedding in their own fashion. Britta gets the party started by hitting the dance floor before Elroy tries an uproarious technique for making friends with others.  He admits that “from 2006 to 2009, I was addicted to encouraging white people” when speaking to the camera. Stacy criticizes Garrett scooping the meatballs as he criticizes her asparagus serving until Elroy swoops in to encourage both of them. Mission accomplished. Annie sits by Frankie and says she just danced with Stacy’s grandmother.  Frankie says that Garrett also has an elderly grandmother in attendance and Annie worries that she’s upset Garrett’s relative.  They speak about helping others and Frankie quickly deduces that she needs to separate Annie from Jeff before anybody has another drink. When Jeff approaches the bar, Garrett’s brother Bones boisterously relapses and gets escorted out of Greendale.  Jeff then steps up and agrees to give the best man speech in Bones’ absence. He pools the group’s info from mingling at the event in order to create a quality speech. After a terribly drunken maid of honor speech, Jeff takes the reigns and really hits it out of the park at first. He then asks Aunt Polly and Me-Maw to meet each other in the spirit of their similarities.  However they are exactly similar because they are the same person.  Garrett and Stacy are married cousins.

The crowd dissolves and the group sits at a table contemplating which one of them ruined the wedding. They each decide that they’re at their best when they’re without the group except Chang who claims he’s at his best. Garrett takes the microphone and announces the cancellation of the wedding festivities in light of the recent news. Chang wants to know what they’re going to do and the groom announces an upcoming annulment. “Oh screw this!” he declares and proceeds to give a bizarrely logical and heart-felt speech. “It’s you against the world and you will not win. But you get to make your moves, not them. He then proposes again to his “legally incestuous wife,” who agrees to the arrangement before Garrett announces that the cake is back on or “you can go to hell!” The crowd applauds as Chang saves the wedding. The episode ends on Garrett and Stacy dancing as the group dances together in one big glob. Abed accuses them of jimming for the camera. The credit tag includes credited writer “Briggs Hatton,” who speaks on behalf of kissing cousins. This is more than likely a pseudonym along the lines of the Coen brothers’ “Roderick Jaynes.” This was an all-around solid episode in terms of humor, but one wonders what Abed could have brought to the camera from the other side of it.