“Community” hits paintball again full force, addressing the spy/ assassin genre in “Modern Espionage.”  The episode opens in Greendale’s black box theatre; Vicki performs a one-woman show “Veni, Vidi, Vicki.” Starburns criticizes it for anybody to hear and excuses him to the parking ramp. Todd, dressed in sunglasses and a similar trench coat, suspiciously approaches Starburns and asks if he’s heard about the secret paintball match on campus. This quickly erupts into a stylistic paintball shootout in the parking ramp as several vehicles take shots.  An anonymous shooter with silver pellets shoots both participants. A Mission: Impossible-esque credits sequence ensues as the “o” in “Community” has crosshairs like the “Bourne” logo. In the parking ramp, the entire custodial staff mops up the scene as Frankie threatens to expel any participant in the paintball game on campus and begins with Starburns, even after she leaned on him for information. Deputy Custodian Lapari (guest star Kumail Nanjiani—“Silicon Valley,” “Portlandia”) tells Frankie that he and the other custodians will diligently work until the area is clean.  Lapari calls Jeff out for his paintballing over the years, but the leading man assures them his days of paintball are done.  She asks Jeff if he will introduce Lapari at a custodian awards gala to speak out against playing paintball.  Jeff leaves, not sure whether or not he’ll participate.

We follow Jeff to the study room already populated with Britta, Abed, Annie, Elroy, and Chang.  He appeals to them on behalf of Frankie to not participate in the secret paintball match. They eventually agree and when this happens, Chang turns on the group and pulls out a paintball gun only to meet a paintball from Britta, Abed, Annie, and Elroy each.  When Chang bails, the others point their weapons at each other, figuring out an alliance.  Three paintballers walk by the open doors as Jeff pops them with Chang’s gun and secures the room.  He denies playing. “That was instinct. I can’t help being a bad-ass.”  He asserts that he isn’t playing as Frankie hears a passerby in the hall claim Jeff shot him.  She enters the study room and finds them all inconspicuously playing “The Ears Have It” again like they did in “Advanced Safety Features” earlier this season. They all deny playing when she asks them before she leaves and they stand to point their guns at each other again.  Abed tells them that they should hate the game this year (not the player) and leads them to a dark, unused room in Greendale. 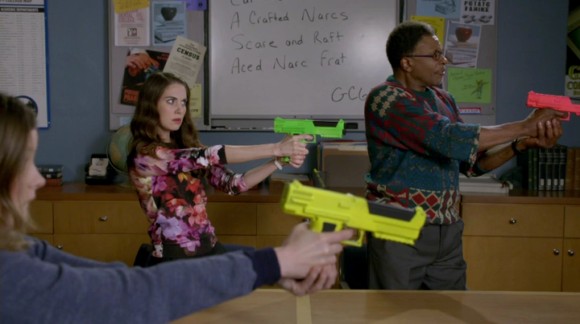 Abed leads them to a computer/ monitor, showing them that the secret game leaked to the school via an offsite server.  These leakers have a dog in the race as well—the silver paintball shooter—as indicated by what Abed digs up and shows to his friends.  He shows them that the trail begins with a staff user in Greendale but ends at City College’s website.  They try to speculate which member of the staff is in cahoots with the rival school as the Dean reveals himself from the shadows as a mysterious figure with information like one might see in the espionage/ spy genre.  Unlike the spy genre, Dean Pelton clumsily makes his way across the room, says another Dean pun, and offers no new information.  He tells them they all work for him now, which they all disregard and keep right on going with the plan.  Jeff wants to tell Frankie, but Abed wants to play to win—exposing Silver Ballz (sic) as the City College informant.  Britta adds that saving Greendale would subsequently save Frankie. The Dean calls them “Dean Force 1,” noting his diminishing respect as Frankie has taken most of that away from him.

At Club Club on campus, Abed infiltrates the dance club to look for a private paintball munitions dealer (the nods to the spy genre never fell flat).  Abed quickly surmises that perpetual Greendale student and midlife party animal Koogler (played again by special guest star Mitch Hurwitz) is the paintball dealer.  When Abed asks the Koog for silver paintballs, Hurwitz’s hilarious character escapes and runs right into Annie, waiting outside the club for him.  When Annie grills her witness, Silver Ballz appears to take Koog out of the game and escapes when the bell rings. Yes, this community college has a bell for class.  Abed catches up with her and nabbed Coogler’s backpack, containing paintballs and a thumb drive/ encryption key. Elroy analyzes the evidence as Britta offers little else to the situation, causing Elroy to ponder why they paired him up with Britta in the first place.  He finds a correspondence between Silver Ballz and Koogler that indicates the mysterious shooter will need a big supply of silver paintballs before the custodial gala.  The Dean emerges from the shadows again to startle Elroy and Britta, but to also to point out that the gala will probably house some sort of paintball assassination. 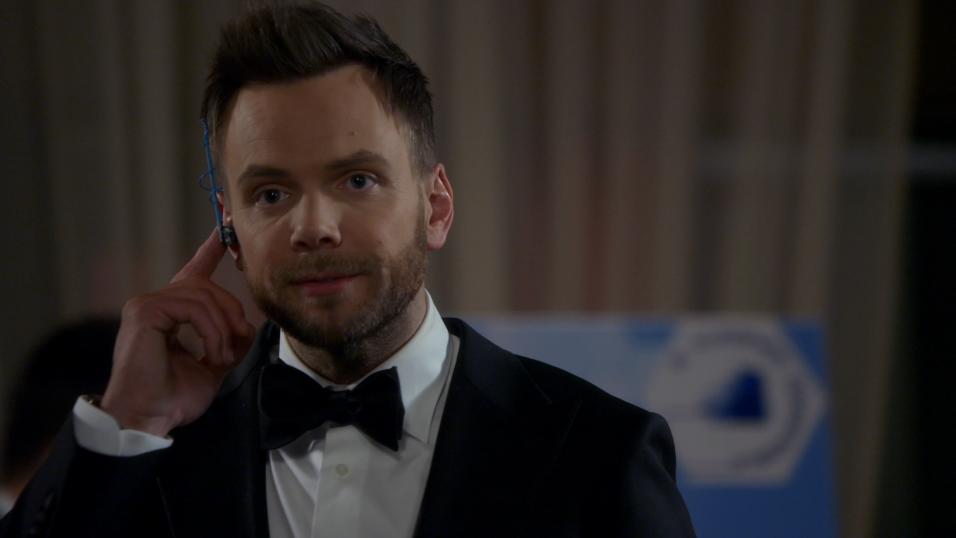 At the gala, Frankie thanks Jeff for speaking and helping her out. Like an IMF squad or MI6, the group infiltrates the party in different capacities and with Bluetooth earphones. They each receive hilarious Batman actor-themed callsigns, probably from Abed. (Abed=Bale, Jeff=Keaton, Elroy=Kilmer, Britta=Clooney, Annie=Belfry, The Dean=Voice of Diedrich Bader). Abed and Annie dance on the cafeteria floor for their covers, Elroy hangs by the bar innocently playing with a spoon as he watches a suspicious waiter, and the Dean watches from above.  Jeff has the Dean move about the campus and when he gets to the elevator, several tough guys board with the Dean.  What at first seems like a fantasy of the Dean’s come true quickly takes a different turn.  Obviously they are supposed to take him out of the paintball game, but the Dean clumsily turns his assassination into a badass fight stunt, taking out and shooting each guy on the elevator to remain unscathed.  He runs across a wall.  Back in the party, Britta notices the same suspicious waiter and forces the group’s hand after she “Brittas” it.  Elroy follows the waiter back into the kitchen, trying to pass off as a waiter himself.  The dishwasher and the cook corner Elroy by the waiter, forcing him to call Britta so they can blast their way out of the kitchen.

Jeff begins his speech as his voice carries over Elroy and Britta shooting the kitchen and the Dean running to the party.  As Jeff hands a golden sweeper over to Lapari, Elroy and Britta finally have a moment to let him know that Silver Ballz is still at large. Frankie commences “The Popping of the Balloons” tradition where every party guest is allowed to pop a balloon.  The cacophony confuses Dean Squad 1, causing a panic among the members to identify the shooter.  Jeff notices a suspicious man making his way toward the stage about the crowd.  When the man gets very close, Jeff steps in front of Lapari and Frankie to shoot the suspicious character, who is a disabled friend of Lapari’s at the gala to support him—not the man want.  As the crowd helps the poor man, the Dean rushes in to announce that the custodians are behind the conspiracy with City College.  Lapari admits as much and the Dean tries to convince him to come back to “their side” to expose City College.  Lapari threatens to jump ship to City College, but Jeff points out that City College won’t hire Lapari if the custodians lose the contest money. Lapari then calls an onslaught of custodian paintball soldiers as Dean Squad 1 diligently shoots up bad guys. First Annie takes a hit, then Elroy, Britta, and finally Abed. Lapari tries to shoot Jeff and the Dean on stage, but realizes he’s out of ammo and tries to escape.  Jeff and the Dean chase Lapari out to the ridiculous Museum of Custodial Arts—a hilarious plot device used to allow all the spy shootout stereotypes (steamy pipes, etc.) to play out like they would in a movie. Lapari taunts the Dean over a speaker system like Scaramanga in The Man with the Golden Gun. In fact, the entire elaborate setup in the museum pays homage to The Man with the Golden Gun.  The custodian wanders out into the museum with his microphone, not seeing Jeff or the Dean right next to him, as he blames Frankie for all of his current issues with Greendale.  When the Dean receives confirmation that the money is real, he turns the gun on Jeff, citing “A cleaner Greendale is like a healthier cigarette!” Frankie steps out of the shadows after Jeff points out all that she can do for the school.  She tells them to lower their weapons and nobody will be fired.  When she leaves, they agree to shoot themselves in the foot to end the match.  None of the men do this as each shoots the man on his right to conclude the game. The last scene shows each group member donning baby accessories as punishment for disobeying Frankie and their behavior.  The credits tag featured the weakest scene as Garrett performs stand-up “Grin and Garrett” specifically criticizing Vicki’s one-woman show in the opening scene. Vicki shows up to drop a guilt bomb on Garrett only to lead to both of them revealing the entire thing as a platform to pitch their spinoff, “Vicki and Garrett.”

At one time, the writers believed they had nothing left to add to their Paintball episodes, but “Modern Espionage” proves that the concept remains sharp as ever, leaving viewers to wonder if there would be another paintball episode in a presumed seventh season and what action motif would the writing embrace? The return of Starburns, Koogler, and Lapari were welcome additions to the season’s best episode to date. Next week, we’ll see the gang prepare Garrett’s wedding on campus.