Continuing its sixth season run on Yahoo! Screen, “Community” hit the midseason point this week in “Advanced Safety Features,” an all-around quality episode where the laughs never stop and characters from the past return in the flesh or mere conversation.  The episode opens in the study room with the committee meeting together to discuss an alumni dance.  Annie has invited all non-incarcerated alumni as Abed searches for the right DJ.  When Frankie asks Chang how far he’s come with the PowerPoint for a city council meeting, Chang answers via PowerPoint presentation with “Chang and PowerPoint: A Journey to Disappointment.” His usual brand of random, chemically unbalanced humor shines here, but it still isn’t as funny as him simply donning glasses solely to benefit the presentation. Attempting to conclude on a high note, Chang cracks an egg to present a dollar yet only the yolk falls out because it was a regular egg. He sits next to Frankie, who decides to push the meeting with the city council. Frankie then announces a warning that somebody has been guerrilla marketing on campus and that people susceptible to it should let the Dean know. As she mentions the Dean, he walks in with excitement because somebody just told him about a new Honda car that wants to buy so badly, that he cancels school on his way back out the door.  Unfortunately, it would seem that only the Dean is susceptible. Honda clearly paid for promotional consideration.  Elroy asks if the meeting is over and exits. After he leaves, the rest of the group wonders as to whether or not Elroy cares for them as much as they care for him and each other. Chang suggests Elroy doesn’t know his place, prompting the others to bring up Troy.  Frankie doesn’t get the fascination with their old friend and wants to know what the big deal is surrounding him.  Jeff pranks her on behalf of the group, telling Frankie that “Troy was very gifted at steel drums.” Jeff promises it will eventually pay off. Chang agrees, cracking an egg again and expecting a dollar but seeing yolk.  He’s no magician.

After the opening credits, Annie corners Britta at the lockers to tell her that a former flame from a “certain sandwich franchise” (Subway from “Digital Exploration and Interior Design” in the third season) has surfaced on the Greendale campus.  Despite Annie’s wishes, Britta darts and finds him in the parking lot selling a Honda generator.  It should be noted the establishing shot of the scene framed his vehicle like one might see a television commercial featuring a car. He tells her that his real name is “Rick” before she fails to take him down on behalf of her broken heart. However, he tells her that he’s finally free, never stopped thinking about her, and that he’s back to rekindle their romance.  The Dean interrupts to gleefully show his new Honda off to Rick which stirs suspicion in Britta. Rick is up to his old Subway…ways. However, the Dean quickly leaves to trade up and get the same vehicle as Rick. She storms off, discovering his ruse, but he talks her into the back of his Honda because it’s obvious neither of them can forget their evening together three years ago in the blanket fort. 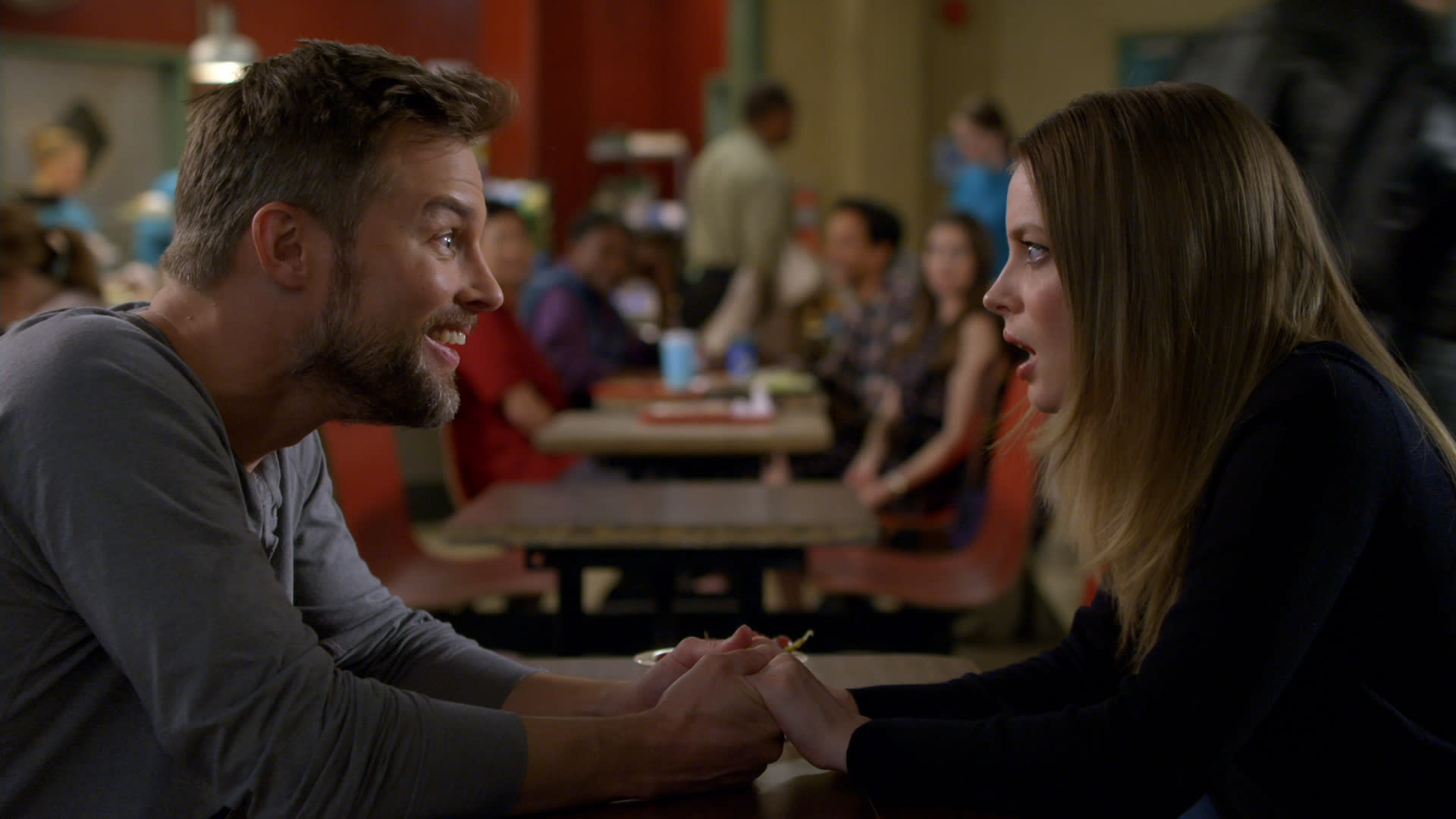 Across campus, Abed and Annie pop into Jeff’s office to let him know Elroy accepted their invitation for a game night to play “The Ears Have It.” Jeff sips scotch and takes digs at his friends, per usual. Jeff declines and they scoot out the door. Back in Rick’s vehicle, Rick and Britta relax after presumably having sex back there.  Britta expresses the desire for a deeper, more meaningful relationship, which is also what Rick/ Subway wants. The Dean interrupts, tapping on the window. “The windows are fogged over. Are you napping heavily?” Rick slips out to distract the Dean, who wouldn’t approve of what just happened.  The Dean presents his friend with all of his new purchases.  Instead of returning his first Honda, he decided to keep it and get another Honda SUV “and a blower, that was just an impulse buy.”  As Britta sneaks away, Rick determines the Dean is “a level seven susceptible” to buying Honda merchandise. We check back with Jeff leaving his office as he can hear the joyful noise of game night between Abed, Annie, Elroy, and Chang. Jeff walks in the room where they play.  Everybody’s enjoying themselves and Chang happily admits that he cheats. Elroy excuses himself again to make room for Jeff.  They joke that Elroy only leaves because of Jeff and Abed deals again as the camera closes in on a removed Jeff.  Does Elroy hate just him? Chang slips Abed some money as the scene ends.

Britta struggles with a keg at her bartending job in “The Vatican.” When she looks up, a man appears out of thin air (special guest star Billy Zane) to order a soda.  Britta convinces him to switch up to a scotch and soda. The man prompts Rick to enter, revealing himself as Rick’s boss from Honda. Rick and his boss convince Britta to take a job with Honda where she and Rick will guerrilla market Honda as a couple without restriction. “I now pronounce you an influential couple,” says Rick and Britta’s boss.  Rick’s boss disappears, but Britta quickly notices that he’s simply hiding. The camera stays with the new couple as they hold hands in the cafeteria the next day and work their sales magic on an unsuspecting Todd. Thankfully, a Honda CRV allows them to accomplish all the antiquing they need to fulfill their sex lives. “You’re amazing. Honda’s amazing. I want you to meet my parents,” Britta’s success and excitement overcomes her, creating a Honda-selling machine with Rick.  Across the cafeteria, Elroy makes a quiet joke at Britta’s expense for Chang, Annie, and Abed. Jeff shows up, again seemingly causing Elroy to excuse himself. Before he leaves, Annie presents Elroy with a Natalie is Freezing album that he doesn’t have. When he leaves, Jeff remains standing with his lunch tray. “I’m like a fart to that guy. He can’t get away fast enough.” They offer suggestions as to how Jeff can befriend Elroy.

Frankie walks right into the Dean’s office which he’s covered and filled with Honda merchandise from wall-to-wall and hand-to-hand. He has problems and certainly loves Honda.  Frankie asks about a new student, Britta’s boyfriend, but the Dean assures her that Rick “wouldn’t secretly be working for Honda because when we first met, he was secretly working for a completely different company.”  Frankie then hilariously insults the Dean while trying to rein her mean thoughts inside her brain. At one point she calls him “a dumb, little man who tries to destroy the school every minute.” He breaks down crying, and embraces her. Meanwhile, the subjects of the Dean and Frankie’s conversation meet with Britta’s parents for dinner. Rick proudly proclaims himself as Britta’s boyfriend and her parents couldn’t look happier. Rick tries pitching them on a Honda immediately, but Britta restrains his sales urge before her parents suggest they watch Avatar.  Britta calls it “three hours of puke,” except Rick lies and says that she’s joking because they love the movie. “It’s an immensely popular movie, of course we love it!” He says between clenched teeth, feigning laughter.  Over at the dance, Jeff informs them a DJ is no longer necessary because he booked Natalie is Freezing to play. Elroy expresses resentment toward Jeff and asks him if he’s trying to impress him. Jeff denies it as Elroy storms off into the distance. Natalie is Freezing then enters, arriving for their gig later in the cafeteria.

On the car ride from her parents, Britta asks Rick why they like Avatar. “In public, yes…Our job isn’t to alienate people.” Britta refuses to live the charade of a life under Honda’s thumb and has Rick leave her on the side of the road. We stay with Britta as she struggles with the keg again at the bar when Elroy strolls in, regretting the sight of another committee member. He tells Britta about the concert, which excites her.  However, he also tells her that he dated the front woman of the band and that she “messed (him) up pretty good.” Britta tries to help him when Rick enters to tell Britta he loves her and that he’ll quit Honda. She struggles over the bar and they head for the concert together, leaving Elroy. Outside of the concert, Rick and Britta hear Frankie on a phone call, talking about the Dean needing to buy a fleet of cars.  Rick’s urge to sell kicks in and promises Britta that he’ll quit after this one last hoorah. “I guess I’m a level seven susceptible, too,” Britta says tearfully. Backstage, Elroy tells off Julie from Natalie is Freezing, but maintains that he still loves her music before wishing her luck in the show. Jeff catches Elroy on the way out. “I’m tired of playing this game. I like you, and I want you to like me.” They hug and exchange ‘I love you’s. 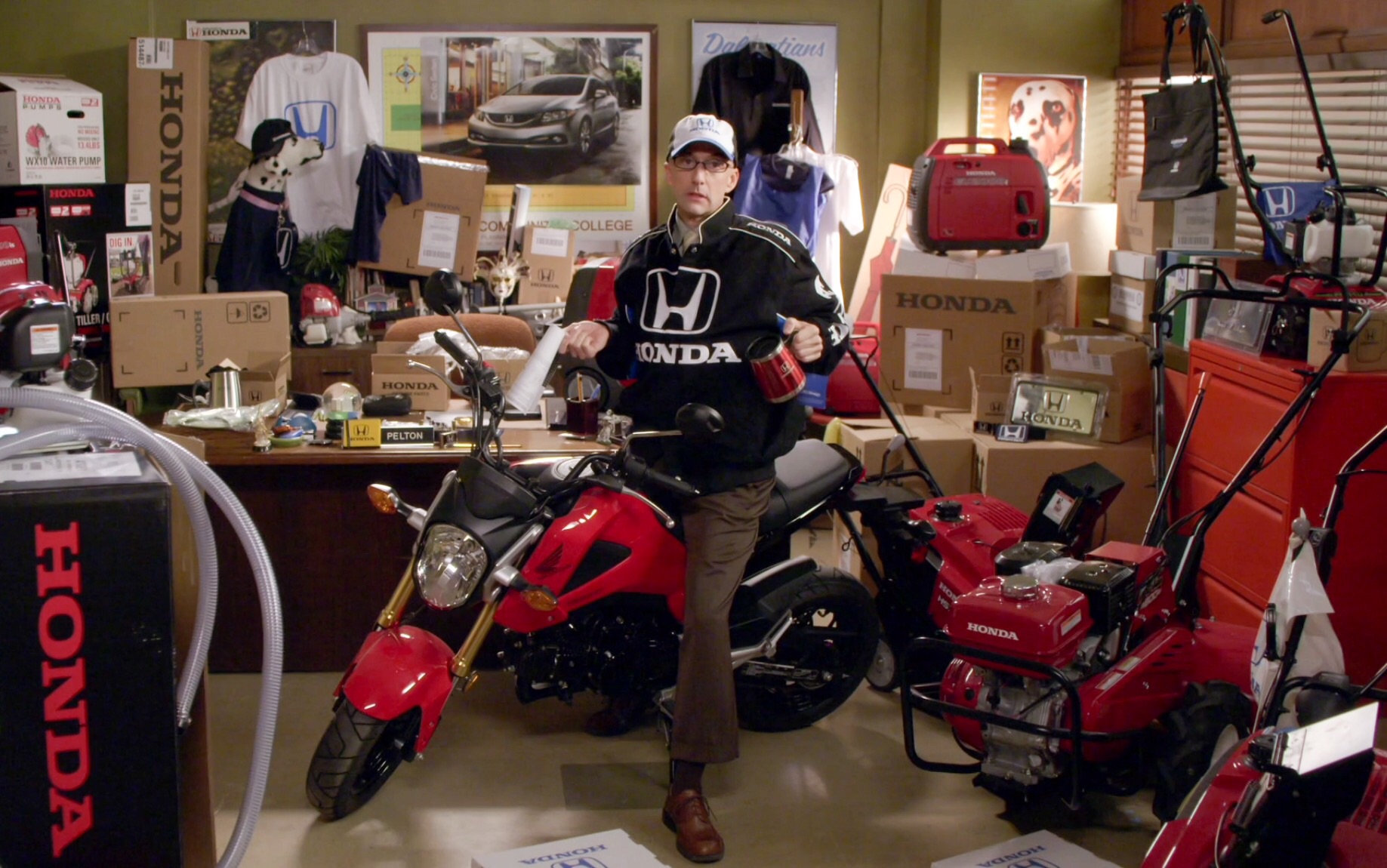 Britta walks through the hallways where she falls upon Frankie, the Dean, Rick, and a pair of cops. Busted. She watches him get carried away by the authorities again.  Frankie talks to the Dean like he’s a baby (or maybe a poodle) to boost his self-esteem for selling out Rick. Rick’s boss appears behind Britta again seemingly from nowhere. He tells her that Rick will be done but can never return. However, the door remains over for Britta, who declines by listing Honda product features. He has her turn around to suck at disappearing again. “Oh my, where could he go?” she feigns. Back at the raging concert, Vicki can’t wait to hear “Pillar of Garbage” that we’ve already heard back in Britta’s bizarre fantasy sequence from “Basic Crisis Room Decorum.” Elroy thinks the song is about either him or heroin. A light shines on Frankie at the back of the stage, playing steel drums. Jeff’s prank finally paid off for them. The song keeps playing as the camera pans over Jeff and Elroy sharing a scotch at the bar Britta tends, mourning the loss of Rick, who drives home as tears fall on his Honda steering wheel. Back at Britta’s parents, she struggles to teach them “The Ears Have It.” They ask about Rick, but that upsets her. Britta storms out for the final time in the episode as her parents ruin the game for her with their uncanny chemistry.  This wasn’t one of “Community’s” concept episodes, but the jokes and laughter never stop in this Britta-centric episode.  The subplot of Jeff trying to get Elroy to like him when the newcomer naturally fit in with the other original members fluidly fit in with Britta’s story.  The Dean popping in with his compulsive Honda buying never lets down as he grew more ridiculous with each scene and edged the episode into memorable territory.

Check out the hilarious Honda promotion that Abed (Danny Pudi) and the Dean (Jim Rash) filmed!