This week on “Community,” a relevant topic pulled straight out of the headlines served as plot inspiration. “Basic Email Security” opens on a stymied Dean Pelton in his office, sitting before his laptop.  Elroy casually strolls by the Dean summons his newest “IT lady.”  Elroy walks in to see what’s troubling the Dean’s computer and it looks worse than expected. According to the flaming skull displayed on the Dean’s screen, Greendale’s been hacked!  Elroy steps out of the office to see the Dean’s secretary got hacked, as well. The Dean panics when Elroy tells him there’s nothing he can do about it except to maybe “cut the hardline at the mainframe.”  Pelton panics and sprints up the hall to cut the hardline. He gets a good distance before returning to Elroy, realizing the prank. Elroy and the Dean read the hacker’s message: Greendale must cancel their standup show for Gupta Gupti Gupta because his awful act carelessly offends most people. The hackerz (sic) threaten to release the activities committee’s emails if their demands aren’t met and they release one of the lunch lady’s emails as a warning shot.  Look closely at the lunch lady’s emails and find that memorial services were planned for Buzz Hickey, the Criminology professor in the fifth season played by Jonathan Banks (“Breaking Bad,” “Better Call Saul”). There are a few more Easter eggs in her email—stuff from Leonard, Garrett, and the Dean, of course.

After the opening titles, a wide shot outside of the study room shows that the hackers infected computers on the entire Greendale campus. The study group contemplates the hackers’ threats. Obviously the hackers threatening Greendale reflects the December 2014 Sony hacks when a foreign group of hackers seized over 100 terabytes of information from Sony Pictures and threatened to publish it if Sony went ahead with plans to release their controversial comedy The Interview.  Obviously the implication here isn’t that Greendale will start a war with North Korea, but the analogy is obvious here. Most of the group read the lunch lady’s scandalous emails, but not Britta, who respects the lunch lady’s right to privacy and freedom of expression. “I’m pretty sure the media’s doing that, Britta. We’re just reading the news,” Chang explains.  The Dean announces the police are present, momentarily scaring Britta and Chang, but it’s merely Office Cackowski (Craig Cackowski), who the group keeps at arm’s length by feigning unfamiliarity.  He makes a joke about the lunch lady, turning things over to one of the department’s newest officers on the recently-formed “cyber squad,” the prepubescent Officer Warburton.  “I want McDonalds!” the kid shouts. Despite the brief setback, Cackowski reveals a clue the department found.  He reads the hackers’ intention to release private emails belonging to the activities group if the comedian isn’t fired.  They don’t get any further help as Cackowski changes the topic to the upcoming Avengers movie, assembling a group to go with him.  The police excuse themselves. 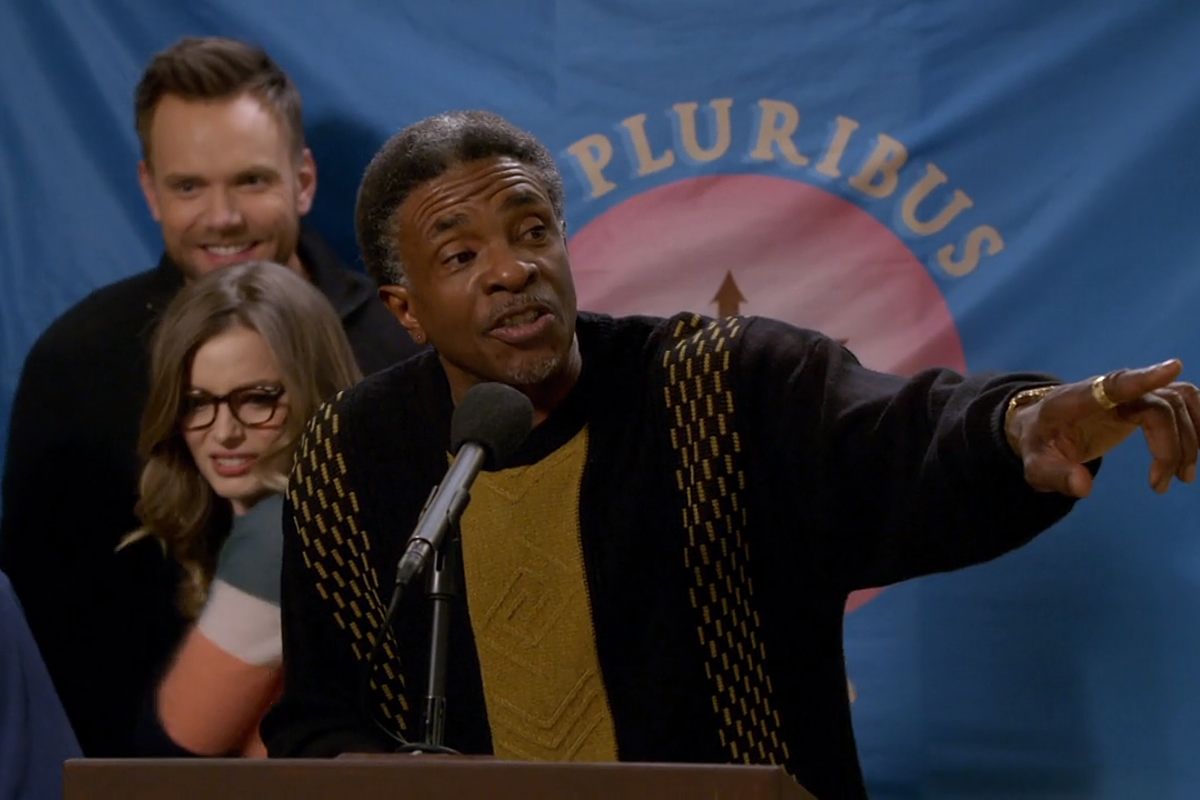 The Dean comes to no other decision but to cancel the show.  Britta, against her original wishes, decides to not protest the comedian’s act because she ultimately supports the broader idea regarding freedom of speech.  Her tangent goes deeper into conspiracy theories before the Dean interrupts, pointing exactly what’s at stake. He prefers his email remain private and verbally backs out of the original arrangement.  Britta stands up, not caring if her emails come out as the others follow suit one by one.  They recognize their emails will probably come out.  The whole group stays on as the subject of the next scene.  In Greendale’s occasionally and hilarious used press conference room, Britta leads a statement regarding the intention to keep the comedian on the show. She goes off on another tangent as Jeff tries to lighten the mood.  Elroy concludes the press conference fittingly. “There’s coffee and scotch in the corner. Screw the hackers, and go Greendale!” As they depart for the day, Frankie makes everybody promise not to read the inevitable leaks.  Elroy exclaims how “It’s Vietnam!” because the enemy is hidden and evasive.  They fight a losing war where each and every one of them gets emotionally exposed.  We’ve seen episodes like this before with the older group, “Intro to Felt Surrogacy” in the fourth season, and “Intermediate Documentary Filmmaking” in the second season.

The next day in the cafeteria, the group wanders in individually to help put up chairs for Gupta Gupti Gupta’s act.  Britta, Annie, and Frankie arrive first and stare each other down. None of them admit reading the leaks that they’re discussing, but it’s obvious they’ve each gone back on the promise. Jeff arrives shortly with a terrible poker face.  Shifty eyes all around.  It’s pretty obvious that everyone except Abed read the leaks. They keep setting up chairs with passive-aggressive taunts.  Nobody fesses up until Chang storms in and immediately cops to it.  “How much of the leak did you all read?” Abed asks the group. “I HAVE A RIGHT TO FIT IN!” Everybody starts shouting, hurling accusations.  Among many things, we find out the group decided to test Annie’s blood for amphetamines.  Britta points out that the hackers wanted this precise reaction, “We gotta be cool.”  Nobody can get past the leaks and Chang calls out Frankie for writing long, unanswered complaints to her sister.  Frankie explains that it’s only a journaling technique as her sister is dead. “Rock bottom,” Britta points out to the group.  Elroy suggests everybody confess an embarrassing element that has seen the light of day.  He begins by admitting he’s pretty much“Catfish’ed” an entire family instead of keeping in touch with his own.  Frankie sees past this, pointing out Elroy made 3D likenesses of herself, Annie, and Britta.  Elroy explains that they’re for a game he’s making but accusations keep flying around as Chang hilariously points out that he’s been underutilized ever since he ended his capacity as their Spanish teacher in the first season.

The Dean and Gupta (played by the episode’s director, Jay Chandrasekhar, Super Troopers, Club Dread) interrupt the argument. The comedian thanks them for being the first school in six months to not cancel on his act.  Britta’s pleased to declare Greendale belongs to the people as they open the doors for the show, but only Fat Neil shows up to see it and Gupta won’t go out for one member of the audience.  The Dean reads a threat from the hackers that spells out how the Greendale students must thwart the show or everybody’s stuff will leak.  Fat Neil immediately tries to thwart the show himself, afraid of what would leak. They manage to subdue him, but he points out that they can’t stop the people.  This causes the group to bar the doors of the cafeteria so Gupta can perform uninterrupted.  The only caveat is that he has no audience.  He opens with a particularly racist bit involving Jewish people right in front of Annie, who solely gets upset when he pauses.  His racist act sucks and only manages a single guffaw out of Chang.  The data leaks and the angry students pounding at the barred doors give up as they have no reason to continue.

The next day at Greendale, anarchy reigns.  Garrett and Leonard hysterically showdown about a girl they knew from a few years ago.  The conversation gets so heated that a couple students carry the angry Garrett away from the situation.  Jeff walks past this mess and the camera stays with him as takes his seat at the study table. “What’s the lesson here?” Chang poses. Indeed. Each member of the group keeps pitching ideas until Cackoski walks into frame with the culprit— another immature kid who correctly guessed Greendale’s easy password.  Warburton recognizes the kid as a former colleague on the same squad and they have a humorous discussion as if “Community” was a crime drama.  The episode ends with the crime drama joke continuing.  Cackoski and Warburton sit in the squad car and have a tough time getting along.  It isn’t a “Troy and Abed” tag, but it’s one of the funnier scenes “Community” offered to conclude an episode. It’s still a wasted opportunity to use the seasonal spinoff gag. Despite a little predictability again, seeing the new crew find out each other’s secrets proved a still-viable formula in an episode with a plot ripped straight from the headlines.