As this is a recap, obvious SPOILERS are expressed below.

Just like “Cheers” was to “Frasier,” one not need to have viewed “Breaking Bad” to appreciate its new spin-off series, “Better Call Saul,” but it undeniably enriches the viewing experience. “BrBa” creator Vince Gilligan even returned to run “Saul” as well as direct and co-write the pilot episode, “Uno,” which will more-than-likely be remembered as one of the brand new series’ best chapters.  AMC’s newest program carries the emotional weight that Gilligan’s previous show displayed, but makes more of a point to inject the natural humor that befalls a struggling lawyer.  Walter White he is not.  Saul isn’t dying of cancer and doesn’t have to provide for a wife or child as was the premise of “Breaking Bad.”  Instead, Saul isn’t even Saul…yet.  Comedic character actor Bob Odenkirk (Nebraska, “Fargo”) returns to the role that made him a household name before that role had its name, Saul Goodman.

The series opens in black-and-white format—the dismal, unfortunate present at a Cinnabon in Omaha.  Ring a bell, “Breaking Bad” viewers?  An unassuming man with glasses, a mustache, and a comb-over cleans up the counter as his coworkers make and bake fresh cinnamon rolls. The camera lingers on the unassuming comb-over and we realize it’s Saul Goodman (under a new, assumed name, Gene) living out the self-fulfilling prophesy from BrBa’s penultimate episode, “Granite State” where he and Walt went different ways.   A man rises to his feet in the mall Cinnabon as his eyes make contact with “Gene’s.” The formidable man maintains an uncomfortable eye-lock until he embraces a familiar face out in the mall pavilion. Viewers unfamiliar with Saul’s predicament at the end of his association with Walter White won’t understand that he’ll spend the rest of his waking life looking over his shoulder for any sort of undesirable character looking to torture and/ or assassinate him. And he told Walt this was the best case scenario? This early scene shows that “Better Call Saul” will explore the other outcome that could have befallen Walter White had he survived and maintained life off the grid.  The camera stays black-and-white for one more scene as viewers then get privy to life in Gene’s apartment.  He pours himself a drink and digs out an old video cassette to pop in the VCR.  Gene sits to drink in a recliner as the tape plays several commercial spots for Albuquerque lawyer Saul Goodman, each containing the slogan, “Better Call Saul.” Queue title card. 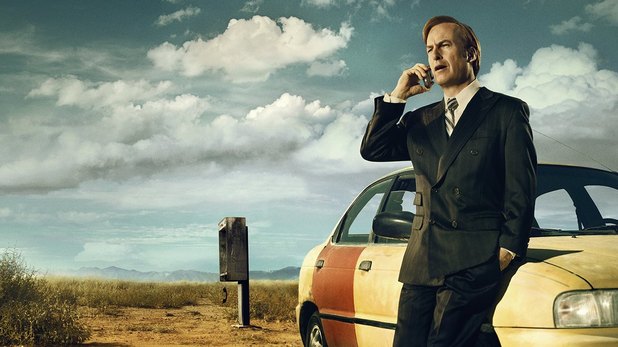 The camera, now in color, flashes back to May 2002 where the lonely, depressed Cinnabon manager represents three 19-year-olds in an Albuquerque courtroom.  Gene is now, instead, public defender James “Jimmy” McGill.  After much waiting in the courtroom by the judge, jury, and all involved parties, the bailiff finally interrupts Jimmy’s closing statement preparation in the men’s restroom. He delivers an awful, unconvincing closing argument which becomes even more ridiculous when opposing counsel offers video evidence of the defendants humiliating a cadaver’s severed head.  The scene abruptly ends as it becomes immediately obvious that the defense has no case.  The camera then jumps to Jimmy complaining at the courthouse for not receiving what he considers proper compensation for his public defense work. He loses that case, as well, before receiving a phone call and answering it in character as a British woman—his fictional assistant.  Jimmy then loses his third case as he initially meets BrBa fan-favorite character Mike Ehrmantraut with Jonathan Banks (Horrible Bosses 2, “Community”) returning to the role of the man who would be Saul’s right-hand man.  The two men argue about validated parking until Jimmy eventually blinks and gives into the demands made by Mike, working as the lot attendant.

Jimmy perpetually losing in the beginning of this episode was not unlike the “Breaking Bad” pilot when Gilligan depicted Walt, however brilliant, as a loser-of-sorts because he didn’t get respect from his students, Hank, Walt Jr., Bogdan, etc.  That pilot even ends with the saddest-ever attempt at birthday sexual contact between Skylar and Walt.  Jimmy doesn’t have a life-threatening illness, but he could certainly use a measure of self-esteem.  The wheels are already in motion for their joint business venture depicted in “Breaking Bad” with a similar motivation between two men who want a little taste of power, desperate to shake the “beta” status bestowed on them by their peers and family. Walt and Saul butted heads many times, but the “Better Call Saul” pilot alone offers bits of Saul’s past that certainly shed light as to how Saul would have weighed the risk he took throwing in with Walt and Jesse Pinkman. 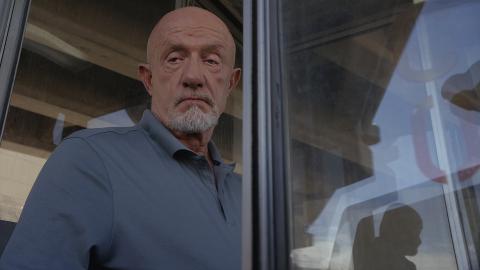 Jimmy then meets a couple at a café.  He tries his hardest, but again fails at another effort.  This effort being to sign a county treasurer and his wife as clients after the treasurer recently fell under investigation after $1.6 million in public funds went missing.  They politely tell him that they aren’t interested.  He already comes off as a man who knows a thing or two about laundering money—his main purpose later in Walter White’s empire.  On their way out, Jimmy tries to have some distinctly cheap flowers arranged and sent to the couple, but the speaker on the other end of the phone line informs him that this is impossible because he already maxed out his credit card. As he screams on his phone while driving away from the café, Jimmy hits a skateboarder while behind the wheel.  The victim’s brother pops out in similar skateboarding apparel, wielding a lawyer’s most valued weapon—a video camera. Terrified of the legal ramifications, Jimmy tries to buy his way out of trouble when he reveals to the two skateboarders that he is, indeed, aware of the fact that they are shaking him down for money. The brothers bail on foot, leaving Jimmy with a broken windshield.

McGill eventually arrives at what he calls an office—a boiler room in back of a Vietnamese Beauty Salon where he isn’t even allowed to sample the cucumber water because nobody respects him.  Walt and Jimmy would’ve been kindred drinking buddies had they never broken into the meth business.  His mail is full of bills, but there is one interesting bit of post.  A most-convenient check for twenty-six grand from the offices of Hamlin, Hamlin & McGill that could solve a large chunk of Jimmy’s problems and debts (these are 2002 dollars, mind you) arrives made out to James McGill.  Instead of endorsing the check and moving on with several problems solved, our protagonist tears the check up into little bits, refusing the money.  We don’t exactly why he does it at first, but this defiant act indicates a man of bizarre principles—a man who makes a scene over $700 at a courthouse but still tears up a check for over $20,000 from a powerful law firm.  Again, Jimmy is showing patterns of a man with a self-established code of ethics just like Walter White.  The parallels between the two Gilligan protagonists in this universe are surprisingly more-than-subtle.  It’s as if Gilligan’s saying, “We know what drove Walt to break bad, now let’s see what made Saul the kind of man who’d partner with a man that broke bad.” The presentation of post-BrBa Saul a.k.a. “Gene” obviously indicates a future tie-in of narratives. 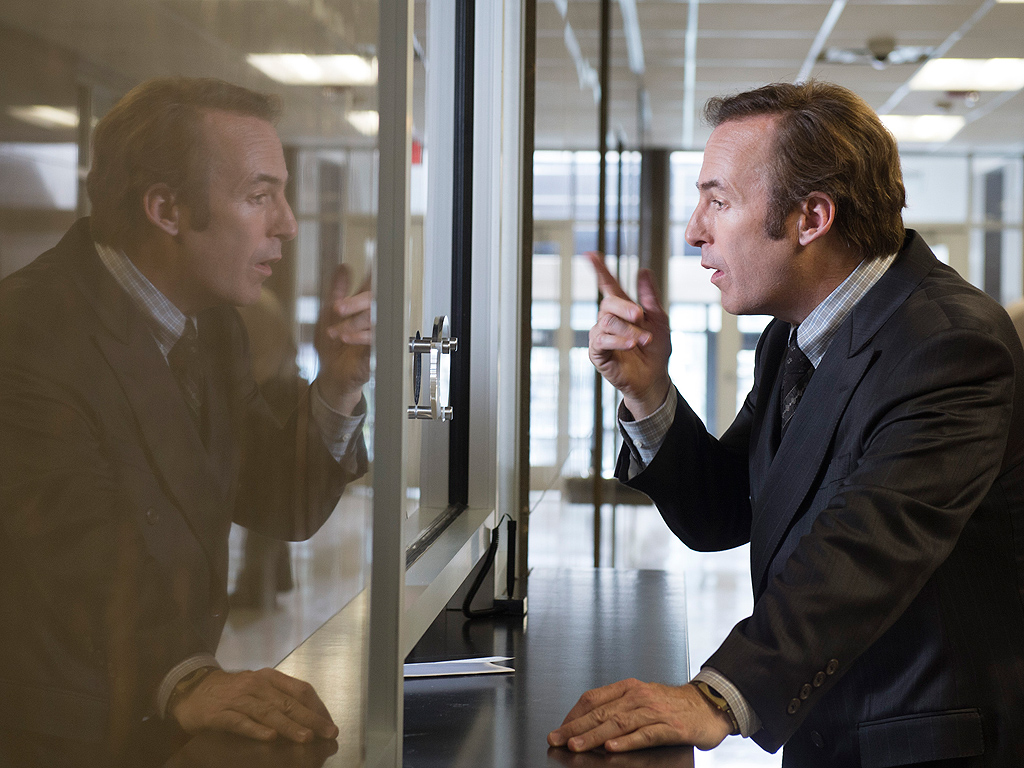 This culminates to Jimmy storming into main office of Hamlin, Hamlin & McGill to face the partners.  The camera lingers on a dented trash can and Jimmy meets a number of hesitant people on his way to the partners’ office—both of which hinted at a past meltdown featuring Jimmy in the office. Jimmy pours his ripped check in front of the head partner (Patrick Fabian—The Last Exorcism).  The disrespected counselor tries to speak on behalf of his sick brother—the McGill in the firm’s name.  He throws several accusations and finally leaves—once again losing.  On his way out, he sees the country treasurer and his wife.  The shot obviously describes that they have chosen the firm’s representation over Jimmy’s.  From the firm, Jimmy goes to see his brother, Chuck, at a home without power. Comedy icon Michael McKean plays Jimmy’s older brother, Chuck McGill, a man who lives in a home without any indication of electromagnetism.  They debate over what’s best, especially concerning whatever has ailed Chuck that keeps him in the shadows. Chuck ignores everything Jimmy says and instead asks him, on behalf of HH&M, to change his name because of the negative effect that it’s having on the firm.  These are the seeds of “Saul Goodman” and the program’s namesake.  Nobody ever disrespected Walter White to the point of asking him to change his name.  Perhaps Saul was pushed around more than his fair share, as well?

After losing the argument with Chuck, Jimmy tracks down and recruits the brothers who tried hustling him at the skate park.  He regales them with his “slippery” past in Illinois where he conned people using slick ice in his hometown.  Jimmy’s plan involves the boys getting hit by the county treasurer’s wife so that he can manipulate them into seeing things his way.  However, the plan goes painfully awry as the car hits one of the brothers and bails without checking anything, a hit-and-run.  The brothers grab on to a truck while skateboarding to follow their mark Back to the Future­-style.  The car finally stops at a different residence and an elderly woman exits the vehicle.  The brothers, not knowing what the mark looks like, pound on the front door and demand a pay-off. They follow her inside the house.  Jimmy keeps calling, but receives no response.  He eventually finds the car and the skateboards on the lawn and knocks on the same front door moments later. The door opens and Jimmy is met shockingly at gunpoint by psychotic “Breaking Bad” antagonist and criminal Tuco Salamanca (Raymond Cruz- Alien: Resurrection, “Major Crimes”). Gilligan wisely chose one major cliffhanger to nearly guarantee a huge audience for the second-part of the program’s two-night premiere event on AMC at 10e/ 9c with the introduction of one of BrBa’s most intimidating villains in the pilot’s final shot.