In what fans have favored as “Better Call Saul’s” best episode to date, a few remaining “Breaking Bad” questions were answered in surprising, slow-burning spectacle.  These answers pertained primarily to the history surrounding Jonathan Banks’ (Horrible Bosses 2, “Community”) no-nonsense, tough guy character Mike Ehrmantraut and his arrangement with the man-who-would-be-Saul Goodman, Bob Odenkirk’s (Nebraska, “Fargo”) Jimmy McGill.  Director Adam Bernstein used his “Breaking Bad” experience to place Jimmy McGill in the Saul Goodman-equivalent slot (if you will) as Odenkirk popped in and out in a strictly legal counsel capacity, and not the protagonist.  Seeing Odenkirk open up with a little more humor and slipping back into comedy relief mode was a familiar, but welcome and nostalgic routine.  He lightened the mood to change up Mike’s dark, tragic protagonist.  If you wondered why all those cops showed up in “Alpine Shepherd Boy” to talk to Mike, the entire episode revolves around it.

The episode opens on Mike initially arriving in Albuquerque at a train station.  He meets a familiar female face and heads for the restrooms.  He ducks into an empty ladies’ restroom to retrieve a pad and then into the men’s restroom to use the pad to re-treat a bullet wound in his shoulder.  The woman is his daughter-in-law Stacey (Kerry Condon- “Believe,” “The Walking Dead”) and with her is his granddaughter Kaylee—the very beloved relative he occasionally talked about on “Breaking Bad.”  Stacey and Mike speak briefly about the death of his son, Matty, another cop on the Philadelphia Police Force.  She voices her concern that Matty’s death happened due to illegal circumstances.  Mike abruptly assures her that Matty wasn’t a dirty cop on the take.  He later leaves in a taxi for a veterinarian who patches up his shoulder on the hush-hush. Good to go to work in the Albuquerque Public Parking Division!

Bernstein jumps forward a few months to the main 2006 storyline as two of the officers who popped in at the end of “Alpine Shepherd Boy” sit across a desk from Mike in an interrogation.  He requests a lawyer and puts down Jimmy McGill’s business card.  Jimmy shows up at the station where Mike requests he spill his coffee on one of the officers in order for Mike to lift the officer’s notepad.  His counsel refuses such a request, instead promising nothing but top-tier representation.  For Jimmy’s sake, the detectives explain that Mike’s son, Matty, was a rookie cop ambushed and killed in the line of duty six months ago in Philadelphia.  These detectives are the lead investigators on the case of Matty’s murder and finally received their first lead three months ago when Matty’s partners, Hoffman and Fenske, were found shot to death with illegal murmurings surrounding the murders.  The detectives all-but-implicate Mike in the Hoffman-Fenske murders when they indicate that Mike moved to Albuquerque the very day after it happened. The lawyer promptly ends the discussion after Mike gives some basic information.  Jimmy spills the coffee on one of the detectives on the way out of the room and his tough client lifts the notebook.  This scene accomplished two things: 1) Mike’s entire back-story and how it revolves around the murder of his son—a fellow cop, 2) established the bond of trust between Jimmy/ Saul and Mike when the lawyer, despite common sense and better judgment, spilled coffee to “aid and abet” his client.

Mike drinks the notebook in at home, discovering that Stacey called the Philadelphia detectives down on him. When Mike goes to confront her about calling the cops, she again voices her concerns about Matty accepting bribes.  She tells Mike that she found thousands of dollars lined in a suitcase and that they couldn’t have possibly afforded it because they were, at the time, living paycheck-to-paycheck. When she says that Matty was probably a dirty copy, Mike erupts with rage—asserting his son wasn’t crooked as he furiously exited the house and headed for his car.  The camera flashes back to Mike heading for a car—and breaking into it—some months ago in Philadelphia.  He enters the obvious “cop bar” and keeps looking at two other cops he proceeds to get rip-roaringly drunk at the bar where he sings his intentions of shipping off to the Land of Enchantment. 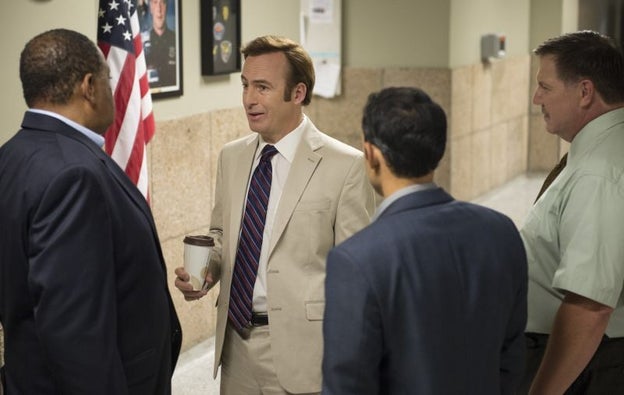 After bar close, Mike drunkenly staggers over to the two cops, leans in between them, locks each of their heads under an arm, and whispers, “I know it was you,” in his Michael Corleone-ist voice.  After his ominous sentence, the camera jumps to this drunken old man dragging his feet on the sidewalk.  The cops pull over and shove Mike into the back of their car where he declares his intention to prove they killed Matty.  These officers are Matty’s partners Hoffman and Fenske, the officers who turned up dead the night before Mike moved to Albuquerque.  Mike barely fits his words together as he works out the crime scene of Matty’s murder.   Matty’s partners were worried that his clean cop status would endanger their mob take or worse so they staged a deal-gone-wrong at a local crack house, leaving the innocent man to die a criminal in the public eye.

The cops drive Mike out to an abandoned parking lot where they intend to execute him in a similar procedure to the way they murdered his son with a fictional crime scene.  As Hoffman and Fenske turn their backs, examining the gun they extracted when they abducted him, Mike’s speech straightens out of the slur and he reveals himself to be a Keyser Soze of sorts—feigning drunkenness to attract the crooked cops into picking him up, letting the prey think they were predators all along.  He shoots both cops with another weapon they never bothered searching for after they found the first gun.  One of the cops shoots Mike in the shoulder hence his wound in “Five-O’s” opening sequence.

The camera returns back to the present where Mike returns to speak with Stacey in her house.  He divulges to her that the entire precinct was corrupt if only to protect their families from the wrath of other, more seriously corrupt cops and the mob if Internal Affairs started asking questions.  He advised Matty to take the bribe for the sake of his family’s safety because he, too, was on the take.  This shattered his son’s world and he eventually accepted the bribe.  Mike tells Stacey that he figured out Matty’s partners still worried that he would rat them out despite taking the money so they decided to stage his murder at the crack house.  Mike corrupted his son, ultimately, for no reason and it torments him.  When Stacey asks her father-in-law who killed her husband, he responds that she should already know the answer. The real question, he asked her, is if she can live with it.

We got to see where the mysterious Mike Ehrmantraut came from as he got his shot playing main character for a week.  Jonathan Banks’ performance for this episode alone should net him a Golden Globe nomination in 2016 among supporting actors.  How wonderfully meta it was for “Better Call Saul” to take its main character, Jimmy/ Saul,  and adjust him back to the exact supporting capacity he filled for the show’s origin—“Breaking Bad.” No other characters saw any action this week as “Five-O” functioned as one of “those” episodes that comes along in programs with rich characterization that explore the origin of a given beloved character like “Lost” did with Richard Alpert and Jacob, “Penny Dreadful” with Vanessa Ivey, etc.  It will be a shame when the first season of “Better Call Saul” ends, but luckily the month of April promises the return of “Mad Men” and “Game of Thrones” with the debut of “Daredevil.”