As this contains a recap, SPOILERS are included.

After ending last week’s “Hero” with Chuck’s harrowing episode under a static blanket to discover the truth by taking his elderly neighbor’s newspaper.  Granted, he left a fiver behind, but she never consented to a transaction. With so much happening in the wake of Slippin’ Jimmy’s latest stunt for both of the brothers McGill, director Nicole Kassell (The Woodsman, A Little Bit of Heaven) spends zero time in the past as the camera never leaves the 2006 primary plot chronicling the transformation from Jimmy McGill to Saul Goodman.  Two police officers respond to the theft of his neighbor’s paper and knock on Chuck’s door.  The hermit lawyer lectures them on probable cause from behind the front door as the officers investigate the premises mid-monologue. Chuck’s lifestyle looks dangerous and foreign to the investigating officers when they spot gas tanks and a mangled, shredded fuse box.  They deem this probable cause and kick the door in, tasing the petrified counselor.

The camera jumps back to Jimmy, who left Chuck earlier than usual that morning to follow new leads after his heroic stunt as he explained in “Hero.” His first stop that morning takes him to a luxurious mansion out in the desert.  Gates surround the compound which the owner populates with expensive gas-guzzlers.  As Jimmy parks between two enormous vehicles, he mutters embarrassing notions at himself regarding the difference in automobile superiority.  The potential client drinks with Jimmy in what Jim Carrey’s Ace Ventura, Pet Detective would call “a lovely room of death”—taxidermies of dangerous mammals consume the atmosphere.  The table between the chairs consisted of a bear head with antelope antlers supporting a glass surface.  The middle-aged, eccentric billionaire proposes to secede from the United States of America in a delusional, ultra-Conservative gambit.  Jimmy, never saying “no” to a million dollar retainer, agrees that they can accomplish this goal after a lengthy court-process.  The billionaire excuses himself from the room to retrieve the first half of his counselor’s retainer.  Upon further review of the cash, however, Jimmy sees that “Big Ricky” paid him in worthless currency bearing his own likeness for the new country he hopes to achieve. The camera then quickly jumps to the lawyer’s next potential client blunder as he wastes no time bailing on worthless currency.  These humorous characters that Jimmy/ Saul meets along the way to becoming a notable lawyer further separate the show from “Breaking Bad” due to the injections of humor.  Jimmy’s big mouth and desperation put him in a different crowd than Walter White’s powerful drug lords, hopeless addicts, and meddling family. 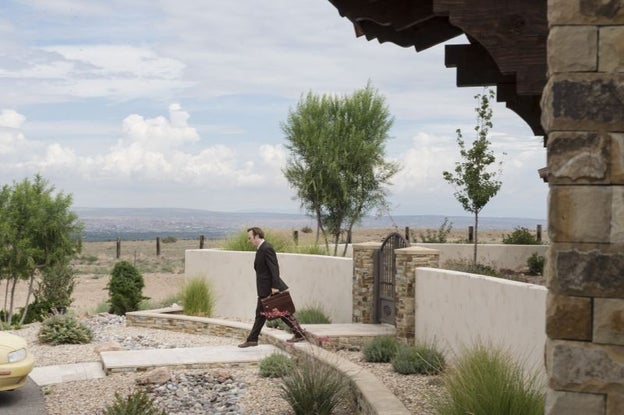 The next client looks a typical suburban MWP. He wants Jimmy to represent him via patent law as he has an invention that’s sure to make money.  Before the father of two reveals his device to his new counsel, the lawyer first signs a non-disclosure agreement regarding the invention.  The grand reveal amounts to a talking toilet that is supposed to encourage children to more effectively learn to use the potty.  Unfortunately, the pre-recorded phrases sound more-than-sexually-suggestive and the proud inventor gets a case of Tobias Fünke syndrome—he doesn’t hear the provocative phrasing.  Jimmy suggests selling it with a Pacific Rim-sexual fetish focus and the inventor curses him off the property.  The third time is the charm as the lawyer finally makes a trivial will for an elderly woman involving her ceramic/ glass figurine collection—one of which is an Alpine Shepherd Boy taking her an eternity to retrieve.  She pays him all $140 up front to cover her legal fees.  Slippin’ Jimmy couldn’t be happier that he pulled his heroic stunt.

Later that evening, Jimmy directly violates his non-disclosure agreement and tells the entire humorous debacle to Kim as they unwind in the nail salon after hours. Hamlin calls her to alert Jimmy of Chuck’s condition.  The two quickly leave to find Chuck in a catatonic state at the hospital.  Not until Jimmy collects all of the electric devices and switches all of the others off does Chuck finally calm enough to converse with his doctor (Clea Duvall- Argo, The Faculty) and explain his condition in the clearest format for the viewing audience.  She switches Chuck’s bed back on without telling him and he fails to notice this, indicating that Jimmy and everybody else have enabled Chuck ever since he developed this delusional sensitivity to electricity.  Dr. Cruise suggests Jimmy commit his brother, and instead the McGills head back to Chuck’s house where they discuss the publicity stunt from “Hero.”  Jimmy promises his older brother that Slippin’ Jimmy is no more and that the heroic billboard stunt was a one-time shenanigan where nobody got hurt or directly hustled out of cash. This seems to brush over Chuck—hardly seems like this whole ordeal was worth it to him—and he encourages his younger brother to focus on drawing wills up for the elderly.

Jimmy takes this advice to heart, watching “Matlock” to get Andy Griffith’s suit just right in order to appeal to simple target demographic. He prints ads of his likeness on the bottom of Jell-O containers at a nursing home with a slogan “Need a will?” and then wades through said nursing home in his Matlock suit to prey on potential money… er… clients.  This episode was originally titled “Jell-O” keeping with the pattern of episode titles ending in“-o,”however AMC wasn’t able to legally secure the right to use the brand name and settled on “Alpine Shepherd Boy.”  The camera jumps to evening time, perhaps that very day, perhaps not.  Jimmy leaves the parking ramp and delights himself in presenting Mike Ehrmantraut with the correct amount of parking stickers.  Trying to form a bond while drumming up business, the lawyer presents the attendant with a business card and takes off on his merry way.  The camera lingers on Mike as Jimmy drives away and we see a typical, uneventful graveyard shift end at the parking garage.  Mike walks away to eat breakfast at a diner as the next attendant approaches the booth.  When he leaves the diner, Mike pulls up in front of an un-established female character’s house and causes her to appear nervous and uncomfortable. As Mike sits in his home, a police squad approaches the entrance.  The detective in charge tells Mike that he’s a long way from home. “You an’ me both,” Mike replies with a quantum of familiarity.  The episode ends on yet another cliffhanger as viewers expect Mike to contact Jimmy using his business card and put a beginning on their unholy alliance next week. “Better Call Saul” is exactly half-way through the first season with no signs of slowing down.