X-Men:   Days of Future Past review

The best and biggest X-Men film to date

Director Bryan Singer’s (Valkyrie, X2: X-Men United) newest film is his third time around directing the X-Men; and he certainly appears to have mastered it after returning to direct the franchise for the first time in eleven years.  Many characters are featured, but only a core few get their characters fleshed out to give the film a proper pace instead of devoting ten minutes to each individual character which would have taken an eternity with a cast this deep.  Mystique’s role in the franchise gets as crucial as it ever has, becoming the target of all factions.  Wolverine, of course, gets as much screen time as possible because he’s the fan favorite and the key to linking the future and the past.  None of the characters speak more than a few lines beyond Beast, whose role becomes limited to Xavier’s apothecary/ servant.

X-Men: Days of Future Past has just as much of a science-fiction flair as it does for its comic book origins.  Singer appears to draw inspiration from sci-fi with bleak futures: Blade Runner, The Terminator, Escape from New York, etc.  Time travel plays heavily into the plot as the film opens in a dystopian future.  Enormous drones (not unlike TRON: Legacy or Star Wars: The Phantom Menace)filled with seemingly invincible mutant-hunting machines called sentinels patrol the Earth. We open on a familiar mutant, Kitty Pryde (Ellen Page- Juno, Inception) and a whole slug of diverse new recruits (Bishop, Blink, Warpath) desperately trying to escape these sentinels.  They meet up with Professor X (who isn’t dead) and Magneto (who has his powers back).  Kitty explains that her little band of X-Men have been travelling back in time a few days at a time using her abilities powered with Bishop’s.  It is then suggested that one of the X-Men travel all the way back to 1973 to stop Mystique from ever getting captured so that her genetic code is never weaponized to create these unstoppable, infinite sentinels. As Wolverine is the only team member who can heal once his mind is ripped apart by the painful exercise, he is the obvious choice to go back in time and convince Xavier and Magneto to team up and end the sentinel threat.

Once Wolverine wakes up in his former self, the plot picks up quickly and doesn’t slow down.  The meat of the film is the seventies timeline as the future sequences become an afterthought.  Singer checks in with the future crew periodically so we know just how tense the future is in relation to a younger Xavier taking his sweet time to get his head on straight.  Younger Xavier and Wolverine are as close as we get to having main characters.  James McAvoy (The Last King of Scotland, Wanted) takes his performance as Xavier to a new level, showing the audience a dark side of the professor never before revealed on screen.  McAvoy’s performance is the stand out of the film as it carries the most range—following Xavier from depressed and drug-addled to the man who would be Sir Patrick Stewart’s interpretation of the same character.  Stewart and McAvoy even share a scene together which serves the emotional high of the adventure.  This isn’t to say the other performances aren’t excellent, but this story really is about Xavier becoming Professor X once and for all.

Hugh Jackman (Van Helsing, Kate and Leopold) plays Wolverine as patiently as ever.  Jackman certainly is the star of the picture, even if it is about Xavier’s maturity.  Logan pulls double duty working in both future and past sequences as the link between the two.  He’s still rough around the edges and a killing machine, but we also see Wolverine lead Professor X into becoming the man that he knows from the future.  It’s almost as if Logan took everything he ever learned from Xavier and put it all into practice for such a time.  Jackman and McAvoy play off each other so well, it’s a pity Wolverine wasn’t a member of the First Class squad.  Michael Fassbender (12 Years a Slave, The Counselor) maintains his same rhythms as Magneto, picking up right where we left him in First Class.  It’s good to see that some characters never change but stay just as captivating.  (He really looks like Heisenberg in that fedora.)  Singer even remembers to include a chess scene yet again between Erik and Charles. It’s Jennifer Lawrence (American Hustle, upcoming Serena), however, serving as the plot catalyst who pops up all over the film in different places all over the world.  Lawrence’s star sky-rocketed since the 2011 installment and her major success from her other big franchise, The Hunger Games, makes her as big of a box office draw as Jackman now.  Of the two dystopian futures, DoFP is far bleaker than The Hunger Games to put it in blockbuster terms.  Lawrence’s Mystique has changed considerably since we last saw her.  No longer just a crony for Magneto, Mystique takes it upon herself to lead the fight against all mutant threats.

Mystique's mission in DoFP: eliminate Bolivar Trask (Peter Dinklage- Knights of Badassdom, Death at a Funeral both US and UK), head of Trask Industries and inventor of the sentinels.  Dinklage gives a terrific performance as Trask.  Mystique wants him dead so badly and the sentinels are so lethal that Trask must surely be pure evil? Wrong.  Dinklage’s Trask seems to have humanity’s interests, save for a skewed perspective, in mind.  Trask even admits to admiring the mutants in one scene.  No other cast member wears the seventies look like Dinklage does in the film. Right down to the mustache. 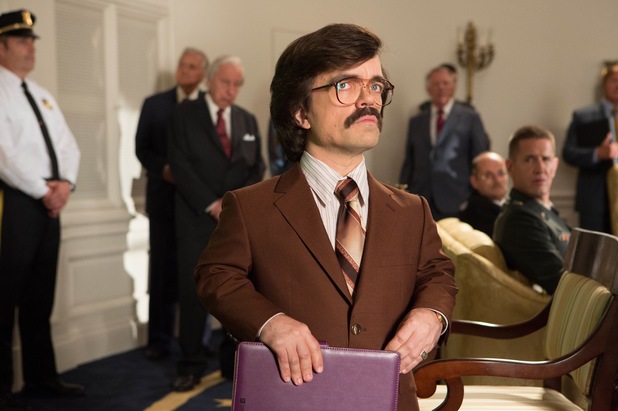 The highlight of the film involves the introduction and implementation of Peter Maximoff/ Quicksilver (Evan Peters- “American Horror Story,” Kick-Ass). Wolverine somehow knows of Peter’s existence (never explained to my disappointment) and before you know it, Logan, Xavier, and Beast are off to recruit him in Washington D.C. Peters’ Quicksilver steals the show for the brief window in which he’s featured.  The speedy teenage mutant with a hyper attention deficit disorder runs all over the Pentagon in a sequence devoted to breaking Magneto out of confinement.  Look for Peters’ role to expand largely in the following X-Men film, X-Men: Apocalypse.

Taking inspiration from James Cameron’s playbook, Bryan Singer tells a comic book story in a dystopian, sci-fi future with robots designed to kill and time-travelling mutants.  Assembling all the X-Men (however brief their appearance) for one big event certainly eclipses the assembly of Iron Man and company for 2012’s The Avengers. Favorite characters like Wolverine and Professor X get explored beyond their typical notes and Mystique’s role amplification feels organic and unforced.  Seeing fan favorites in Sirs Ian McKellan and Patrick Stewart play their old, familiar roles is worth the price of admission alone.  Most characters received limited screen time, most notably Oscar-winner Halle Berry’s Storm could have had a more prominent part. Seeing Anna Paquin’s name billed as high as it was in the credits seemed awfully perplexing for what was the briefest of cameos. However, it’s still a spectacular experience seeing each mutant perform their respective powers as only state-of-the-art special effects of 2014 can grant. Hopefully, Singer can get his legal battle behind him and get to work on the next X-Men adventure.