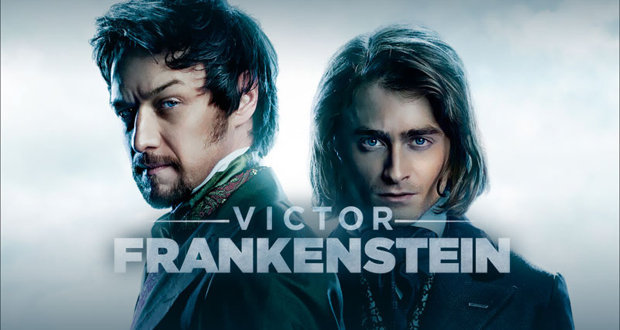 Victor Frankenstein never should have happened, cinematically speaking. Debuting at number twelve on the box office list and making an abysmal $3.4 million over a five-day holiday opening weekend on a $40 million budget, audiences obviously wanted to see Katniss Everdeen, an animated dinosaur, and a boxing spin-off more than a blockbuster take on a well-known story. 20th Century Fox unfortunately gambled that stars James McAvoy (X-Men: Days of Future Past, Wanted) and Daniel Radcliffe (the Harry Potter series, The Woman in Black) are big enough names to carry a blockbuster all the way to the bank without any X-Men or wizards.  Thanksgiving weekend usually attracts a higher box office, but the latest action interpretation of a literary character fizzled with audiences who determined they viewed this movie before in the form of Van Helsing, Dracula Untold, and The League of Extraordinary Gentlemen.

When speaking with “Total Film” magazine, director Paul McGuigan (Gangster No.1, “Sherlock”) openly referred to his latest film as a “backstory” for the character of Victor Frankenstein because “he’s not really had a backstory.”  This statement is so incorrect that it’s impossible to take the director, and subsequently the film, seriously. In the same interview, McGuigan calls Mary Shelley’s classic 1818 novel Frankenstein; or, The Modern Prometheus—the source material—“…dull as dishwater.”  Why (outside of money) would a person direct a multi-million dollar interpretation of something he or she believes is “dull?” McGuigan later states, “…my catchphrase is always: ‘If you love the book, you’ll hate the movie.’” Does this sound like a man who believes in what he made?  Perhaps the box office return would have been a tad more forgiving had the director not directly bad-mouthed the novel from which his latest movie took its’ everything. Did he not realize that Victor Frankenstein’s “backstory” already existed in the form of Mary Shelley’s novel?

Studios marketed previous Frankenstein adaptations as horror projects, with the exception of Kenneth Branagh’s dramatic take which starred Robert De Niro as “The Creature.” While horror typically attracts a solid box office on a given weekend, action-adventure is another story altogether. Victor Frankenstein has been advertised as an action-adventure sci-fi buddy flick with humorous elements and romantic melodrama. It’s fair to call the film a potential love letter to the monster movies of old with clear-cut good guys and bad guys, but the director’s unfortunate word choice in his “Total Film” interview cheapen the experience. The film’s action also relies heavily on CGI and other special effects as opposed to impressive camera work, suspense, or physical stunts.  To call Victor Frankenstein an “action” movie is kind, but really the closest genre to consider it.

McAvoy and Radcliffe share solid chemistry as leads. McAvoy plays the titular character while Radcliffe has protagonist duties as narrator and lab assistant, Igor.  McGuigan called his film a backstory for Victor Frankenstein, but it really serves Igor’s origin as the character originally appeared in James Whale’s 1931 film Frankenstein and never in Shelley’s novel. The audience learns more about Igor through Radcliffe’s sympathetic performance as the put-upon, beleaguered lab hand. Unfortunately, Igor’s story is as predictable as it is boring, holds little action and largely grotesque shock.

Perhaps the blame lies in screenwriter Max Landis’ court. After complaining on Twitter about the low box office haul from his summer action comedy American Ultra, Landis might finally take audience refusal to see his movies as a hint after Victor Frankenstein. His script largely relies on Igor’s narration, spending the first three minutes on Daniel Radcliffe narrating the situation without simply showing it. Like the novel, the main characters seek to bring life to a lifeless organism. Unlike the novel, they immediately have to kill what they’ve just created—negating everything they work for and seek to achieve throughout the film. If you want to watch a movie where all the action and efforts amount to nothing, Victor Frankenstein might be the ticket. It should also be noted that Landis employs cheesy, unnecessary biblical references throughout his script. For example, Victor tells Igor that they “will make a man in (their) image,” never calling attention to the fact that they aren’t really “making” a man from nothing as the analogy suggests they would.

Victor Frankenstein arrived dead in theaters. Banking on two leads from well-established franchises and hiring a director who didn’t care for the source material panned out poorly for 20th Century Fox who already have the flop Fantastic Four to explain to fans. Action remakes of literary characters has really tried to take off as a genre, but never gained momentum. A painfully predictable plot and laughable writing amount to a movie so awful it can’t even land in the “so-bad-it’s-good” category.