Robots really do have souls

After releasing Pain and Gain last year on a relative micro-budget ($26 million according to boxofficemojo.com), blockbuster extraordinaire Michael Bay (Bad Boys, The Rock)returned to the big budget realm and directed his fourth Transformers franchise film in eight years with Transformers: Age of Extinction. He’s nothing but hard-working so far as the entertainment world is concerned as he has his hand in producing Teenage Mutant Ninja Turtles for release later this summer.  Like Pain and Gain, Bay retained star Mark Wahlberg (Lone Survivor, Ted) to serve as lead. Unlike Pain and Gain, Wahlberg’s performance lacked heart. Playing a father in the heart of Texas, Wahlberg’s Cade Yeager has every aggressive rhythm and sounds every bit as trademark Boston as the actor who plays him.  The film’s funniest moments arrive in unexpected moments when Wahlberg’s “Texas” tough guy inventor delivers some awfully-written dialogue. (“I think we just found a Transformer!” is ripe for late-night sketch parody.)  Despite a ridiculously unnecessary run time coupled with dialogue faults negatively affecting Wahlberg’s performance, Transformers: Age of Extinction manages to come out as the best Transformers sequel to date. 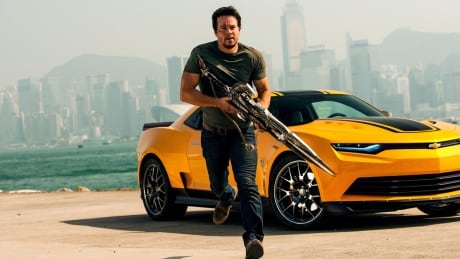 Unlike Revenge of the Fallen and Dark of the Moon, Age of Extinction presents the least-complicated plot since the 2007 original—the United States government partnered with a private corporation to create man-made transformers, making the Autobots superfluous (like most of the subplots in the narrative).  The problem is that it takes an hour too long to wrap it up neatly, a trait right on par with Transformers sequels.  Too many unnecessary characters and subplots muddy what could have been a concise, quality blockbuster.  At first, the gags come off as self-aware: Cade constantly refers to his daughter’s skimpy skirts and is a nightmare for her boyfriend, an old cinema owner complains about sequels and spin-offs taking over original films, and Optimus Prime speaks in heroic phrases and quips.  These get old quickly as one can only appreciate gags so many times and most of the film’s humor attempts fall flat.  As stated before, the movie’s real humor lies in the unintentional.  Poor dialogue and over-acting from super-star Wahlberg would normally come off as cheap, but manage to give the movie a charming camp.

Secondary characters like the villainous Kelsey Grammer (“Frasier,” upcoming The Expendables 3) and neurotic Stanley Tucci (The Hunger Games, The Devil Wears Prada) receive far too much screen time and have their characters explored deeper than necessary for the purpose of pacing.  Nicola Peltz (“Bates Motel,” The Last Airbender) plays Tessa, Cade’s daughter, and provides the film with just about every other unnecessary subplot.  As much as she may not like it, the fate of the world doesn’t hinge on her scholarship and her dad paying bills mostly because it has nothing to do with the age of the Transformers’ extinction but also because convenient plot device Stanley Tucci plays a super-duper billionaire.  Although the runtime due to unnecessary subplots becomes the most obvious flaw, the score also added nothing new.  Steve Jablonsky’s music sounded nothing short of a rip-off from Hans Zimmer’s music in the Dark Knight trilogy. It was nice, however, to hear any other band apart from Linkin Park in a Transformers movie thanks to Imagine Dragons.

Transformers: Age of Extinction has a lot more working for it than against it.  Despite boosting the runtime, Bay reacted to criticism he received for the franchise sequels in his own fashion. Although it’s easier to follow, the over-the-top, effects-laden action spectacle remains fully intact and amplified.  The main plot is simpler and easier to follow mostly in part to more obvious and menacing villains in Grammer’s Attinger and the Decepticon Lockdown.  Attinger states at the film’s beginning (following the “true story” of dinosaur extinction) that the age of the transformer is over.  Titus Welliver (Gone Baby Gone, “Lost”) plays yet another man in black as Attinger’s right-hand man and trigger finger—another obvious villain.  Welliver and Grammer’s characters work way behind-the-scenes with Lockdown to bring an end to Autobot life while Cade Yeager salvages an old semi-truck for scrap who turns out to be Optimus Prime.  Grammer gives the standout performance in the film.  It's always fun to watch actors have fun on screen. It's an increasingly frequent treat to catch well-known, veteran actors ham it up on screen for a little while, like Jamie Foxx, Paul Giamatti, and Robert Redford earlier this year.  Grammer looks to enjoy the summer of 2014.  He showed up for a quick, welcome cameo in X-Men: Days of Future Past, took villain duties over from McDreamy for a Transformers movie, and will join the Expendables' ranks in August.

Another sign of Bay and Universal Studios listening to fan input is the inclusion of the Dinobots—transformers who shift into dinosaurs.  The gargantuan alien robots serve for a visual spectacle and chew up the film’s climax.  With a 165 runtime, the Dinobots pop in not a minute too soon as the movie runs into problems relying on its human characters when the transformers’ conflict guides the pace and plot. However, Age of Extinction further indicates that future installments may not involve planet Earth or human involvement period. Perhaps Bay squeezed every ounce of humanity left in the franchise in preparation for an all-transformer motion picture in space? Instead of inundating the film with shots of Megan Fox that pander to teenage boys, Bay instead takes the route of Wahlberg reminding his own hot daughter to wear shorter skirts every 8-17 minutes.  Wahlberg plays a better, more dedicated parent than the Witwickys from the previous three films—he doesn’t constantly curse or tease his daughter despite the fact that he shelters her to the point of border-line unbelievable. Transformers: Age of Extinction plays like an average, bloated blockbuster.  The movie certainly doesn’t lack spectacle or grandeur, but bloats and runs on too long getting caught up in its own ambitiousness.  Mark Wahlberg carries the film playing Mark Wahlberg which adds an unexpected, welcome camp to a movie containing a cigar-smoking robot voiced by John Goodman and schmaltzy lines about transformers having souls from Optimus Prime. Pain and Gain looks to be what Bay needed to get out of his system before making the Transformers sequel he always intended.