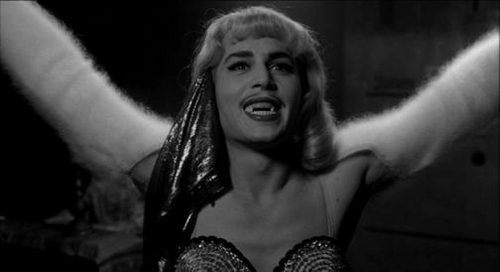 “Don’t you think angora has a certain tactile sensuality lacking in all other fabrics?” The budget for Tim Burton’s biopic Ed Wood about infamous B-movie director Edward D. Wood Jr. (starring Depp in the titular role) was greater than the combined budget of Wood’s “oeuvre.” Ed Wood came out as a low-budget, independent picture in 1994—a passion project of the actor’s (he didn’t make Pirates money here).  Depp’s bold quirkiness never fit a part better in his career.  Wood’s own wife commented “That’s my Eddie” when she first saw the actor step out of his trailer in makeup and wardrobe. Although Martin Landau received all the awards attention for his performance as Bela Lugosi in the film, the overlooked and underappreciated Depp can’t be denied as flawless in the film. He disappeared into the director of terrible movies, seeming genuinely just as comfortable in angora as Wood himself. Not only could Depp pick up all of Wood’s rhythms and eccentricities, he executed perfect timing and showed he could do comedy with the best.