Despite the fairly impressive box office haul from 2012’s Snow White and the Huntsman ($396 million on a $170 million budget, according to boxofficemojo.com), nobody expected Universal Studios to pursue a sequel after the behind-the-scenes controversy that appears to have ended actress Kristen Stewart’s blockbuster career.  For presumably financial reasons (the profit can’t be that great?), the studio pushed forward without the fairy tale princess/ warrior to present a film focused on the other titular character, Chris Hemsworth’s (Avengers: Age of Ultron, Ghostbusters)Eric the Huntsman, for 2016’s most clichéd blockbuster. One can easily imagine The Huntsman: Winter’s War came to fruition in the hopes of franchising the two Huntsman movies into a theme park ride at either of Universal Studios’ theme park resorts (especially because a third entry gets teased in Winter’s War), because this blockbuster certainly won’t make bank at the box office.

This movie would have a bigger fan base/ following if it had released twenty or thirty years ago, however it came out in 2016 where audiences will recognize it for a “Game of Thrones,” Frozen, and  Alice in Wonderland pastiche. There’s certainly nothing wrong with a pop culture amalgam as long as the narrative carries its own air of originality somewhere—be it in plot, characters, settings, motifs, structure, etc.  Unfortunately, The Huntsman: Winter’s War lacks originality in large chunks, amounting to three hilariously predictable acts despite impressive, exciting action scenes and fight choreography. Will true love win out over evil? Can a bad person change? Sigh, yawn. These lessons would stick if they weren’t followed by a contrived sequence of an axe swinging at bad guys faster than the camera can spin. 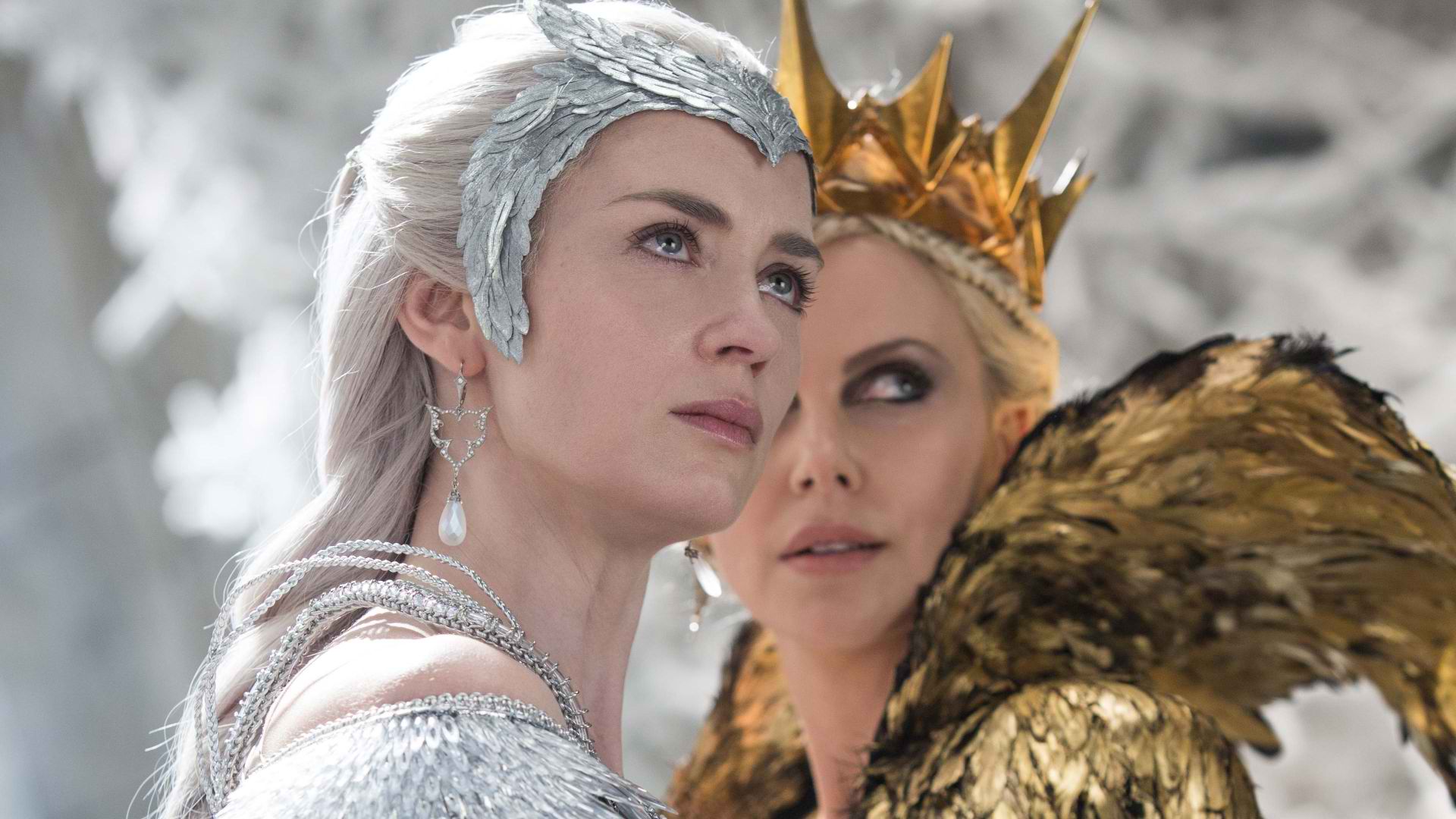 The performances check out, but nothing of value comes from the collective cast. Emily Blunt (Sicario, The Five-Year Engagement) takes primary villain duties and gets the most interesting character, Freya, an evil ice queen seemingly straight outta Narnia (or more like Charn). However, once Academy Award-winner Charlize Theron (Mad Max: Fury Road, A Million Ways to Die in the West) re-enters the frame as Ravenna, the powerful witch/ antagonist from Snow White and the Huntsman, Freya’s arc goes to the backburner because it’s simply no longer a suspenseful arc. Theron also found herself at the center of controversy during the 2014 Sony hacks/ leaks when her salary was discovered to be a mere fraction as that of co-star Hemsworth. She eventually received equal compensation ($10,000,000 by most reports), but by the end of the movie, one wonders why other stars in the film like Blunt or Jessica Chastain (The Help, Crimson Peak) didn’t receive Theron’s salary as Ravenna basically cameos in a bookend capacity while the other characters appear throughout.

Hemsworth stars as Eric, and Chastain co-stars as his equally skilled warrior-wife, Sara. Unfortunately, The Huntsman: Winter’s War may have been Hemsworth’s last chance as a blockbuster star. After box office disappointments Blackhat, In the Heart of the Sea, and Red Dawn, it clearly looks like he needs Marvel Studios for a paycheck just as badly as they need a “Thor” for their cinematic universe. Both love interests/ protagonists employ annoying, unnatural (I wanna say) Irish accents for their characters, but I suppose something needed to make the writing come alive. These two appear in so few shots together, it causes one to reflect on how bizarre the filmmaking process can affect art. Did the studios insist on casting despite the stars’ schedules not matching up at all? The action scenes admittedly appeal to the eye, but both characters fight so independently that they rarely share a frame.

The Huntsman: Winter’s War will probably amount to a stepping stone on the way to a full-fledged 3D ride at Universal Studios Orlando in the end, but in the present, audiences know it as the blockbuster sequel/ prequel released between movies where super heroes fight other super heroes. Just as disappointing and unnecessary as Snow White and the Huntsman, its sequel went the other way in financial terms and flopped at the box office on an opening weekend where The Jungle Book took the cake for the second week in a row. While Chris Hemsworth may not have finished starring in blockbusters, he may have ended his string of non-Thor-related headlining gigs.