The third entry in The Hunger Games franchise begins with plucky protagonist Katniss Everdeen (Academy Award-winner Jennifer Lawrence- X-Men: Days of Future Past, Serena) recovering from the Quarter Quell debacle in the third act of the previous installment.  She exits her room and finds Finnick Odair (Sam Claflin- Pirates of the Caribbean: On Stranger Tides, The Quiet Ones) after following the sound of sobbing.  The rebellion rescued neither Peeta nor Annie from the Quarter Quell and District 12 is totally reduced to nothing but rubble and human remains.  The opening scene lets the viewer know that the film expands upon its young adult origin in order to explore themes targeted for mature audiences: survivor’s guilt, martyrdom, politics, propaganda, civil war, and a paramilitary hostage extraction similar to the Bin Laden assassination sequence in Zero Dark Thirty. Although a worthy installment, The Hunger Games: Mockingjay—Part 1 is the weakest film in the incendiary franchise due a lack of action and story.  Obviously the film feels incomplete as the first of two parts, but the slow-moving plot never really tells a story as much as it revels in developing some of the lesser-explored characters and expanding upon political themes in a dystopian future.

Jennifer Lawrence has been dependable on screen since breaking out in Winter’s Bone and that trend doesn’t stop here.  Her performance as Katniss isn’t any weaker than before, Lawrence seems less interesting in The Hunger Games: Mockingjay—Part 1 because the character’s only role this time around is as a propaganda device (the titular Mockingjay) for the rebellion.  Katniss doesn’t fire her bow and the only time she defies death is by laying low in a bunker for a night. 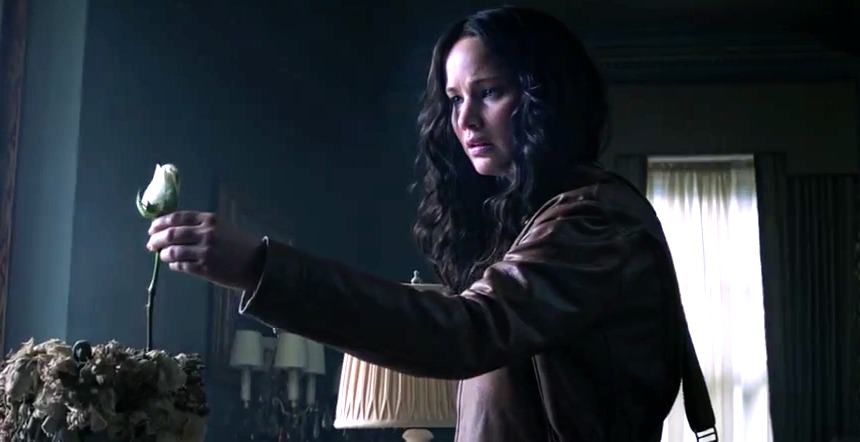 The action doesn’t follow Katniss just as much as the President Coin (Julianne Moore- Still Alice, Non-Stop) keeps her out of and away from it.  The winner of the 74th Hunger Games is far too valuable a rallying symbol and political tool than to get killed in the line of the duty or protecting loved ones.  Action doesn’t really break out until the third act and she doesn’t factor into it.  There’s good reason for this movie’s poster being the only Hunger Games installment not depicting Katniss aiming an arrow. It’s interesting to explore director Francis Lawrence’s (Constantine, I am Legend)vision of Panem and its inhabitants, but eventually it makes the main character less main and more boring.  The Hunger Games: Mockingjay—Part 1 puts the rebellion front and center.  It’s bigger than Katniss; she’s only a piece of the machine to take down the Capitol and President Snow (Sutherland).  However, one should expect Katniss and her bow to feature right in the thick of it for the conclusion.

Several terrific supporting performances are the result of Katniss more or less functioning to broaden secondary characters.  This shouldn’t present a surprise as the supporting cast consists of veteran thesps Moore, Elizabeth Banks (The Lego Movie, Pitch Perfect), Donald Sutherland (“Crossing Lines,” MASH), Woody Harrelson (Out of the Furnace, “True Detective”), Jeffrey Wright (Only Lovers Left Alive, “Boardwalk Empire”), Stanley Tucci (Transformers: Age of Extinction, “BoJack Horseman”), and the late Philip Seymour Hoffman (The Ides of March, Moneyball).  Sutherland provides a chilling, ruthless villain—a dictator running Panem on a platform of fear and mass-murder, playing head games with Katniss throughout by torturing Peeta in the Capitol and forcing him to answer Caesar’s (Tucci) slimy leading questions.  Harrelson’s Haymitch sobers up and joins Banks’ Effie Trinket in bridging the gap between Katniss and the rebellion.  Julianne Moore’s President Coin has an interesting role as the leader of an uprising intent on taking back hope for Panem.  She needs to present a symbol for the people to rally around and use to take back their home.  The friendly, optimistic Plutarch (Hoffman) suggests Katniss is the only symbol, leaving Coin to placate her Mockingjay in order to keep morale going. 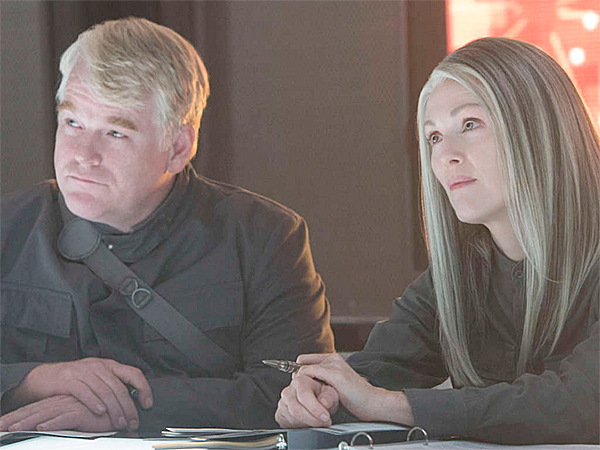 The younger cast also steps up their performances and presents equal talent to their veteran peers: Claflin, Liam Hemsworth (The Expendables 2, Paranoia), Natalie Dormer (“Game of Thrones,” Rush), and Josh Hutcherson (Escobar: Paradise Lost, Epic).  Claflin’s Finnick no longer puts on the carefree, charming persona from The Hunger Games: Catching Fire and instead wears a sad, defeated look on his face.  The rebellion has begun taking its toll on the happiest of characters.  Hemsworth features more than he has before in a Hunger Games picture and continues his roll of Katniss’ “husband-type” character, Gale, that looks out for her family (he goes back first for Willow during the raid, before Katniss does) and doesn’t question their relationship despite her perpetual Peeta pining.  His action background figures perfectly into the third act as Gale’s mission quickly becomes the highlight of the picture.  Dormer plays the producer/ director of the propaganda pieces starring Katniss who seems to take on the extension of Coin when the crew is out shooting.  Like Katniss, Peeta also takes a backseat to the action as a hostage of Snow's.

Despite a lack of action and plot, The Hunger Games: Mockingjay—Part 1 still pulls off an interesting look at some fleshed out, developed characters in a terrifying, hopeless setting.  Jennifer Lawrence continues her string of terrific performances as Katniss despite a lack of action surrounding her that existed in the first two installments.  The supporting cast finally gets their chance to shine without a weak performance among them.  Francis Lawrence foregoes a Young Adult-vibe in favor of political science fiction (or poli-sci-fi) against a dystopian future backdrop.