Spend the Fourth with wise lesbians

For the second year in a row, Academy Award nominee and comedy mahatma Melissa McCarthy (“Mike and Molly,” Bridesmaids) took over the Fourth of July with Tammy following 2013’s The Heat with Sandra Bullock. McCarthy and husband Ben Falcone (Bridesmaids, What to Expect When You’re Expecting) co-wrote the script with McCarthy starring under freshman director Falcone.  Unfortunately, The Heat had far more laughs and better pacing. The worst part for Tammy will be competing with Transformers: Age of Extinction in its second weekend.  I admit I heard Transformers’ above-audible booming explosions and intense score from the adjacent viewing house when I saw Tammy. The good news is that this raunchy, road trip comedy serves for a tolerable treat for those who buy a ticket.

Tammy (McCarthy) begins the film on a bad note and perpetually steps on sourer notes as the predictable plot progresses.  Sure, we get the uninteresting, one-dimensional love interest stereotype with charm and good looks like most comedies, but the remarkable reversal in Tammy is that the female characters have their shot at depth and complexity while the male characters have to look good and help the main character on their journey. Mark Duplass (Safety Not Guaranteed¸ Humpday) acts admirably with what little he’s given in the script but this truly is a ladies’ act; and on that front, it doesn’t disappoint.

The film begins slow and flat with a few laughable gags.  Her antics come off so idiotic and unbelievable at first that comedy is forgotten early in favor of drama.  She isn’t funny at the beginning, just sad.  The jokes arrive at the worst possible moment for her as they tend to do in movies, and those invested Tammy’s terrible day just feel too bad for her to laugh.  The immature gags appear more obvious as the film goes on to show Tammy’s maturity.  I suppose going for less subtle traits were the tactic here.  However, several hateful, awful moments between Tammy and her grandmother throw the mood from comedy to soap opera in a matter of seconds making the next joke a little harder to swallow with the residual animosity.  It takes a while to get laughing in Tammy, but it’s possible once a few more stable characters get added to the mix.

Tammy shows three generations of the women in Tammy’s family.  Academy Award winner Susan Sarandon (Dead Man Walking, Thelma and Louise) plays her grandmother, Pearl, and injects a bit of spirit into Tammy no good, horrible, very bad day.  Sarandon arrives not a moment too soon channeling Alan Arkin’s Oscar-winning performance in Little Miss Sunshine as an alcoholic, drug-addicted grandparent aching to get out of the house and on to the road. She stays on screen with Tammy through most of the three acts and serves as a second lead of sorts.  Allison Janney (American Beauty, The Way, Way Back) plays Tammy’s mother/ neighbor and adds her trademark maternal humor to the ranks in a supporting role.  It’s Kathy Bates who steals the show, appearing in the third act as Pearl’s cousin, Lenore.  Bates’ brand of frank, deadpan delivery certainly works here as a sage, partying, Viking funeral pyre-lighting, Molotov-throwing, hard-working lesbian from Tennessee with the right flair for life who drops in to guide Tammy on the right path. 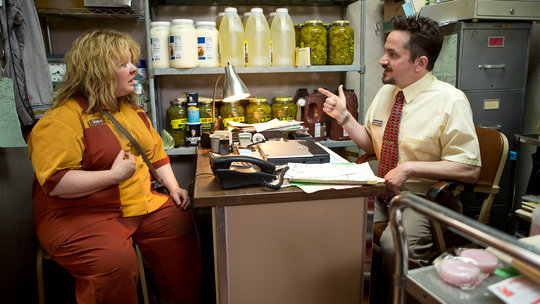 Tammy starts off on too many dramatic notes to enjoy the jokes, but certainly picks up once the cast builds.  Despite some mean sparring between Tammy and Pearl, the second and third act’s jokes build well.   McCarthy stars in her husband’s first directorial effort and surrounds herself with the best possible supporting cast in Sarandon, Janney, and Bates.  The interesting reversal to one-note male characters supporting the female character on her journey (even a stereotypical, protective father Dan Aykroyd pops in for a few minutes) is blatant evidence of a growing Hollywood gender stereotype.  It shouldn’t be so obvious when one gender has a monopoly on interesting characters and Tammy is a humorous effort toward progress.