Renowned French filmmaker Luc Besson’s newest release, Lucy, certainly won’t match the acclaim of his previous releases like Léon: The Professional or The Fifth Element, but the filmmaker has no illusions about his picture’s premise and elects to take the plot as ridiculous as he dares insofar as suspended disbelief and the PG-13 rating allows.  Besson also directed last year’s The Family, another film that didn’t the same par as some of his older films.  Despite a lukewarm streak, Besson’s Lucy looks to take the box office top spot this weekend over Brett Ratner’s graphic novel-inspired Hercules and that’s saying something—a foreign, female-driven sci-fi movie poises to come out ahead of a comic book movie starring Dwayne Johnson. Has the market shifted to an emphasis on proven storyteller over special effects?

Scarlett Johansson (Her, Under the Skin) graduates to bona fide action star as the titular character that begins her celluloid journey in Taipei. Oscar-winner Angelina Jolie (Girl, Interrupted) reportedly attached her name to the script and later passed which wasn’t a terrible idea as Lucy certainly follows the vein of the characters the actress played in Salt and Wanted.  After playing a supporting, yet crucial role in three Marvel movies (Captain America: The Winter Soldier, The Avengers, Iron Man 2) as Black Widow, Johansson carries the entire movie from start to finish as our unfortunate protagonist—believable in a wide spectrum of circumstances, channeling the emotionless alien from Under the Skin at times while the Black Widow element becomes obvious in others. Her character’s path becomes unmistakably similar to that of the plot of this year’s Transcendence, but Lucy offers more than just droll, poorly-paced science fiction with a super star thrown in to polish it.  While Transcendence spends an extra half-hour exploring the implications of a consciousness expanding beyond the mind, Lucy instead packs in some exciting car chases and shootouts without exploring the moral implications of full brain capacity usage. 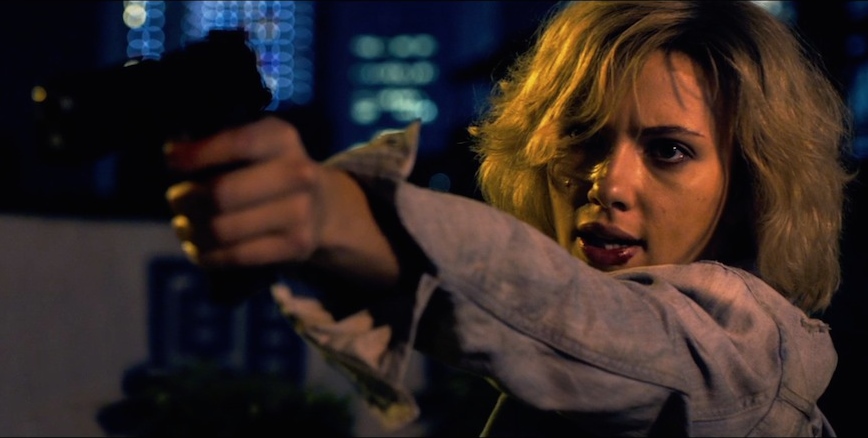 As stated before, Besson has no illusions about Lucy.  Despite the fluctuating quality of his films, one can always depend on the filmmaker’s awareness and attention to the situation.  At eighty-nine minutes, Lucy doesn’t waste a whole lot of time resolving the conflict despite the constant, stock footage quick-cuts to the animal kingdom and urban jungle reminiscent of Neveldine/ Taylor’s Crank and Gamer to illustrate one point or another about the meaning of life and what to do with it, or how the animal kingdom relates to Lucy at one stage in the film or another. Besson also draws plot elements from 2011’s Limitless in regards to the theory of human beings typically using ten percent of their cerebral capacity and how a drug comes along to enhance that usage to one-hundred percent.  The film loses steam in this regard.  In order to sustain existence and expand her brain, Lucy gobbles a synthetic drug based on a compound from pregnant women like a fat, hungry vampire to blood.  As Johansson’s Lucy progresses her cerebral capacity, her abilities become almost hilariously more advanced than the last stage of enhancement and one is expected to just go along with it if one is to glean some measure of value from the price of a ticket.  At the very least, be thankful Besson hasn’t bloated his blockbusters like Michael Bay’s Transformers: Age of Extinction.

Besson also surrounds Johansson with proven talent in Academy Award-winner Morgan Freeman (Million Dollar Baby) and Korean cinema legend Choi Min-sik (Oldboy, I Saw the Devil).  Freeman appears as a brilliant professor to literally describe what’s going on precisely like his role in last year’s sci-fi action flick Oblivion without the dystopian future.  Choi Min-sik doesn’t appear in much of a capacity as Besson limits his role to a one-dimensional, drug-peddling crime kingpin with a penchant for profit and evil. With Lucy, Luc Besson presents a well-paced pastiche with a solid lead performance from Scarlett Johansson who stands her ground as an action star.  Despite familiar plot elements and ridiculous assumptions of brain capacity theory, the film never lets up and holds the audience’s attention from start to finish.  Talented actors like Choi and Freeman, however misused, make it easier to suspend one’s disbelief in a perplexing, but stimulating movie that explores the origins and meaning of life in an action-packed atmosphere.