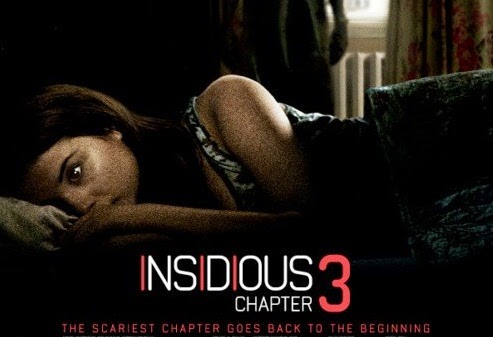 After director James Wan’s (Furious 7, Saw) first two suspenseful installments following the Lambert family’s terrifying ordeal, the Insidious franchise throws a change-up at its audience for the third chapter with a new director, haunted family (the Brenners), and setting. Familiar faces still appear as Insidious: Chapter 3 also presents an origin story of sorts for a few established characters: psychic Elise Rainier and her ghost-hunting partners-in-crime, Tucker and Specs, boldly following Elise almost as much as the new tormented protagonist, Quinn. Rookie director Leigh Whannell takes points of Elise’s arc from the first two installments and uses them to ret-con a few new ones. The film’s strength lies with the series veterans as the Brenner family’s emotional drama hardly feels like it’s on the same scale as the fresh hell they experience throughout. While a decent horror film, an Insidious movie doesn’t have the same rhythms without leads Rose Byrne, Patrick Wilson, and Ty Simpkins.

Even with a different director, filmmaker Leigh Whannell picks up the series’ suspenseful tone right where Wan left it at the end of the second film. He co-wrote the previous Insidious films, a few Saw movies, and Dead Silence with Wan and co-starred in both previous Insidious installments as Specs, one half of the comic relief ghost hunters. The director uses recognizable long take techniques—slow establishing shots that close-up on a character with nervous, suspenseful stringed instruments playing. We’re also treated to the classic scare device of placing an unexpected-yet-expected body to appear in an established angle. Whannell also directs himself to great timing in his humorous, supporting role—Alfred Hitchcock could only pop in for his movies.

Former child star Stefanie Scott graduates to leading a franchise horror flick as Quinn Brenner, a talented girl of the stage arts on the edge of high school graduation. Dermot Mulroney (The Family Stone, August: Osage County) plays a supporting role as her stereotypical grieving father, Sean, who prioritizes his son over Quinn by making her take over the duties of the family’s recently-deceased matriarch. Quinn aspires for an acting school beyond graduation, but Sean couldn’t care any less than he cares about her claims of supernatural activity. The graduation theme drips heavily throughout the film as if pandering to the high school tradition currently under way across the United States. This plot device only slowed down the story of Quinn contacting her mother and Elise’s history of entering “the Further”—two arcs well-worth an investment. Despite dealing with a predictably stubborn father, Quinn’s paranormal experience sequences will terrify viewers already expecting to see something frightening.

Lin Shaye (There’s Something About Mary, Ouija) commands the screen in each scene, despite having some laughably awful dialogue written for her in the closing moments when she sounds like just another “reality” television charlatan. Shaye returns to the franchise giving a performance equally heartbreaking and resilient as Elise. Fans learn more about the plucky psychic who originally introduced us to the Further, beginning the film in a much darker state of mind than the other chapters.  Following a recent loss, Quinn seeks psychic help to contact her mother. Elise, too, suffered a recent death which scared her away from entering the Further any…further.  Quinn believes her mother tried contacting her from the great beyond, but the gifted clairvoyant quickly understands that a familiar spirit may have other intentions for the put upon protagonist.

Despite some lazy writing and character stereotypes, writer/ director Leigh Whannell implements Wan’s style of shocking, suspenseful camerawork to complement the horror in storytelling.  Character actress Lin Shaye continues her role of the franchise psychic as Elise and gives perhaps the best performance the Insidious franchise has yet to offer. While still a decent horror film (especially by PG-13 standards), Insidious: Chapter 3 never hits the heart-bursting thrills and lacks a game-changing reveal as featured in the previous 2013 chapter, a heart-stopping pastiche of Psycho and The Shining. I’m sure the Lamberts and Lipstick Face plan to return in the coming few years.