When Cloverfield hit cinemas in January of 2008, filmgoers didn’t know what to expect after its ambitious viral marketing campaign that boasted “found” footage of a violent, bizarre kaiju attack on New York City. At the end of its theatrical run, Cloverfield made $170 million worldwide on a $25 million budget. (boxofficemojo.com) Something obviously went right for Bad Robot Productions as the J.J. Abrams-owned company also managed to inspire more films (such as The Dark Knight, Inception, and District 9) to adopt similar advertising strategies which also ended in success.  Eight years have passed since Cloverfield came out with the thought of a sequel seemingly trashed as studios tend crank out sequels at will in an effort to strike while the iron is hot or before ticket-buyers forget about the franchise. However, a well-timed and unknown trailer debuted in theaters this January before viewings of 13 Hours: The Secret Soldiers of Benghazi to remind audiences the power of mystery. Now in 2016, 10 Cloverfield Lane arrives to take a new, however inconsistent, direction in the Cloverfield legacy. 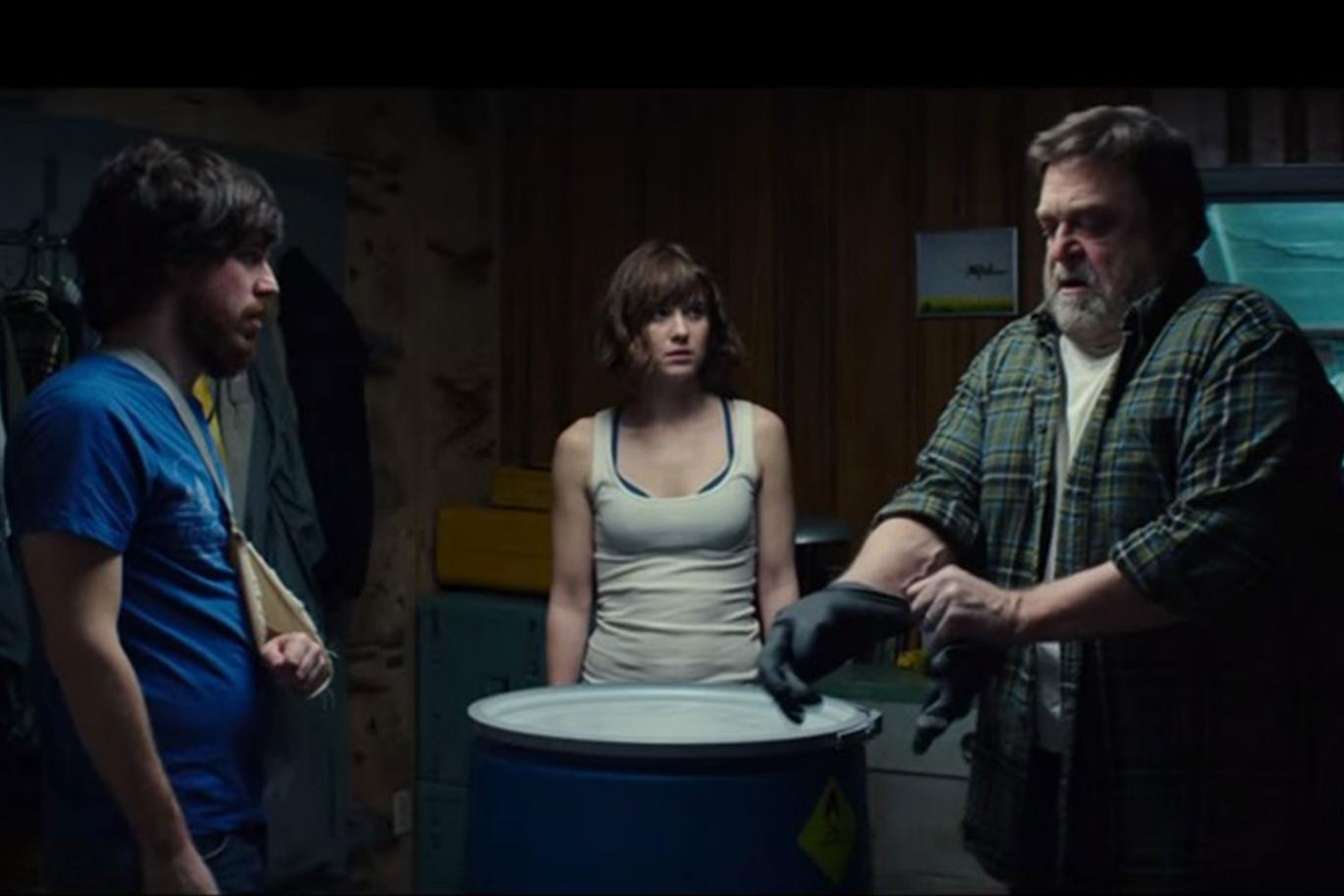 While Cloverfield’s puzzling trailer came out nearly six months before the full-length film, the trailer for 10 Cloverfield Lane has only been up since the end of January.  In entertainment terms, this is a near-ludicrous decision unless the marketing team convinced the accountants they could make more money with less coverage. Audiences had the entire final half of 2007 to put together the plot of Cloverfield, building up word-of-mouth and adding a mythical quality, and now in 2016, we had a month and a half to figure it out for ourselves. It’s almost a miracle that Bad Robot kept production entirely under wraps as the greater entertainment community had little idea—not a single leak from the cast and crew—until the trailer hit screens. First-time feature film director Dan Trachtenberg made the film on a micro-budget of $5 million (and then spent about twice that much on marketing/ advertising) as the studio began to publicize the event fewer than two months before opening weekend. After coming in second place during its opening weekend with almost $25 million behind the family-friendly Zootopia, it’s still safe to say that Bad Robot knows how to market their films for maximum enjoyment. At the very least, BR knows how to sell movies to people that go to them.

10 Cloverfield Lane does not take New York City or even the Eastern seaboard as a setting, which already has the viewer wondering how the film connects to the preceding 2008 entry. In fact, the film adopts a typical three-act narrative structure and abandons the found footage element featured throughout Cloverfield. Mary Elizabeth Winstead (Scott Pilgrim vs. The World, Abraham Lincoln: Vampire Hunter) stars as Michelle, a woman living in a big city and suffering through the middle of a relationship crisis with her fiancé when she hits the road. One thing leads to another and she wakes up handcuffed in a cellar after an accident. Was Michelle’s accident/ predicament related to the events of Cloverfield? The answer is more unclear and ironic than one expects. Winstead turns in a gutsy performance dripping with humanity and a serious survivor’s instinct—reminiscent of Brie Larson’s Oscar-winning performance in Room.

In another contradiction to Cloverfield, its “sequel” cast A-list talent in the form of John Goodman (The Big Lebowski, Argo). While Winstead’s name is also bigger now than the cast members of the 2008 original, Goodman’s presence provides another source of marketability without having to do so much marketing. How bad can a movie be if John Goodman is in it? (After 1994’s The Flintstones, that is.) The well-known actor serves the simultaneous savior and villain roles in an ironic twist as the intense, humorless Howard.  Even when he’s not seen on screen, Goodman’s Howard haunts every scene as the direct answer to, “What will happen if x, y or z goes awry?” Joining Howard and Michelle in the cellar is the friendly Emmett, played by John Gallagher Jr. (“The Newsroom,” Short Term 12). Emmett knows Howard from before they were all holed up in the cellar and helps Michelle acclimate to her new surroundings despite his broken arm.

Despite the film’s ingenious approach to marketing and casting, the narrative structure of the plot unravels at the second plot point. While the first two acts primarily stay in the cellar with performances serving as the film’s focus, the third act shifts to a more effects-laden spectacle (read: the budget went to the stars and the special effects). At 100 minutes give-or-take, most of it takes place in an underground bunker with little special effects to speak of outside of some gruesome makeup and standard sound effects. The climax feels rushed as if the first two acts were left untouched by the studio and the final twenty minutes were completely overhauled and rewritten to work the film into the Clover-verse. In terms of fire power, the first hour only displays Howard’s gun (and dances with the Hedda Gabler rule) until the beginning of the end when all manner of hell breaks loose. Simply put, it’s inconsistent. Bad Robot Productions will continue to fine tune their marketing approach over the next few years, obviously, but it should be interesting to follow. They tried their brand of viral marketing once between the Cloverfield movies in 2011 with Super 8 and that also added up to success. BRP also owns the Star Trek films, but those practically market themselves (yet still require an enormous budget).  With 10 Cloverfield Lane’s success, the successful production company may not have turned in a consistent film, but they’ve proven they have what it takes to make a decent sequel/ spinoff eight years after everybody forgot about the first and yet still make it relevant.